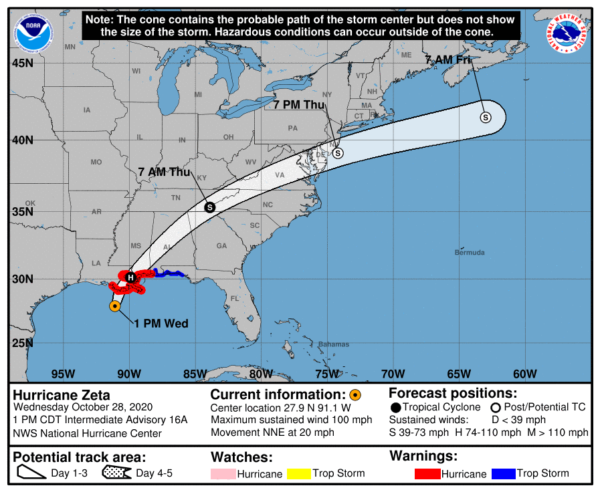 WATCHES AND WARNINGS
——————–
A Storm Surge Warning is in effect for…
* Mouth of the Atchafalaya River to Navarre Florida
* Lake Borgne, Lake Pontchartrain, Pensacola Bay, and Mobile Bay

DISCUSSION AND OUTLOOK
———————-
At 100 PM CDT, the center of Hurricane Zeta was located near latitude 27.9 North, longitude 91.1 West. Zeta is moving toward the north-northeast near 20 mph. A faster north-northeastward motion is expected through tonight followed by an even faster northeastward motion on Thursday and an east-northeastward motion early Friday. On the forecast track, the center of Zeta will make landfall in southeastern Louisiana this afternoon. Zeta will then move close to the Mississippi coast this evening, and move across the southeastern and eastern United States on Thursday.

Maximum sustained winds have increased to near 100 mph with higher gusts. Some additional strengthening is possible during the next few hours, and Zeta is expected to reach the northern Gulf Coast as a hurricane before weakening over the southeastern United States on Thursday.

HAZARDS AFFECTING LAND
———————-
STORM SURGE: Along the northern Gulf Coast, the combination of a dangerous storm surge and the tide will cause normally dry areas near the coast to be flooded by rising waters moving inland from the shoreline. The water could reach the following heights above ground somewhere in the indicated areas if the peak surge occurs at the time of high tide… 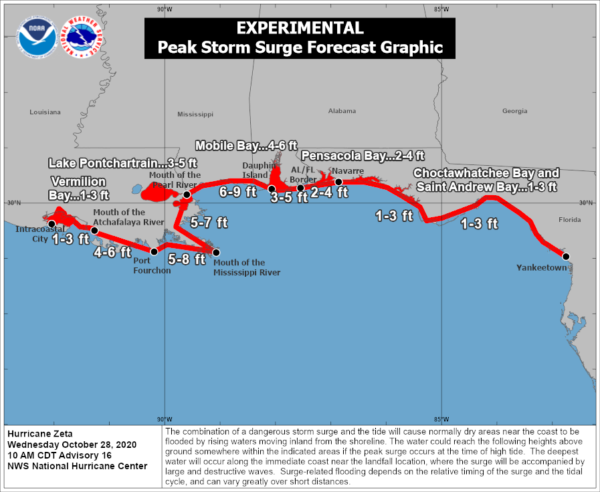 The deepest water will occur along the immediate coast near and to the right of the landfall location, where the surge will be accompanied by large and dangerous waves. Surge-related flooding depends on the relative timing of the surge and the tidal cycle, and can vary greatly over short distances.

Damaging winds, especially in gusts, will spread well inland across portions of southeastern Mississippi, Alabama, and northern Georgia this evening through early Thursday morning, and into the Carolinas and southeastern Virginia on Thursday. Wind gusts could be especially severe across the southern Appalachian Mountains on Thursday. 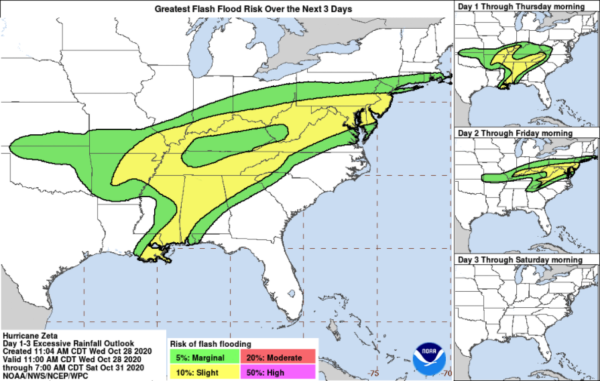 RAINFALL: Areas of heavy rainfall, both in advance of and along the track of Zeta, will impact areas from the central Gulf Coast to the Mid-Mississippi and Ohio Valleys, and eastward into the southern to central Appalachians and Mid-Atlantic today through Thursday. Rainfall totals of 2 to 4 inches with isolated amounts of 6 inches are expected across these areas, resulting in flash, urban, small stream, and minor river flooding.

TORNADOES: A few tornadoes are expected this afternoon through tonight over southeastern parts of Louisiana and Mississippi, southern Alabama, and the western Panhandle of Florida.