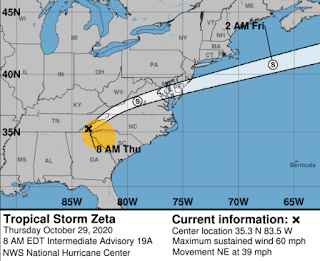 It’s basically moving as fast as…

More important than the Cone.

The map from the NWS 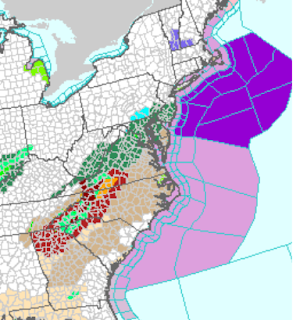 Impacts being trees down, power outages. 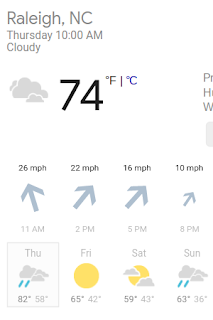 See how windy it really gets.

Probably going to rip our fall colors away.

My absolute favorite pic from Zeta.

Mike, only Mike would do this. 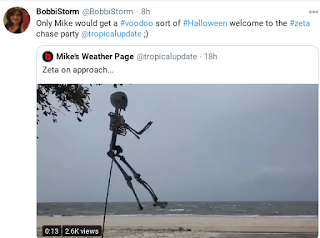 You wondered what Mike would add to the show.

It’s important in life to “be you”

No one else is YOU.

As for Reed he looks like he had fun.

Reed helped me with something once. 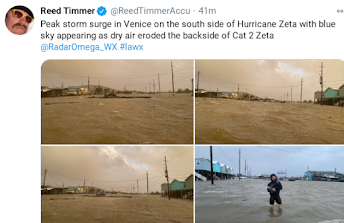 It was making landfall at sunset.

…now it’s in the Carolinas at sunrsise.

How cray cray is that? 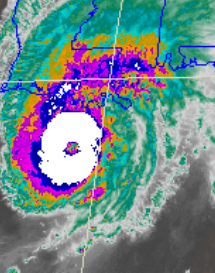 Barely 18 hours later after that picture. 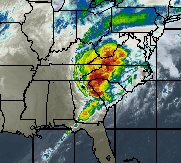 And Josh got to chase from his front porch.

Amazing end to his Summer in Mississippi. 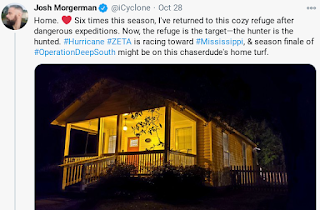 BUT….hate to tell you but

Hurricane Season 2020 NOT over.

Short post this morning, because to be honest I was up late following Zeta and friends chasing and I’ve been outside a bit following the weather here locally as Zeta is a fast moving crazy storm moving NE at 39 MPH with 60 MPH winds. That’s a meteorological math problem that creates a stronger punch than just the storm alone and how wild is it that a tropical storm is moving at almost tropical storm force wind speed. Think about it.

The damage reports are coming in, power is out and at least two possibly three deaths have been confirmed so far and others are missing. Hopefully not all who are missing are death just sleeping it off somewhere and without cell phone service. The financial hit from Zeta will be huge. New Orleans survived, of course, but power it out and it raced through faster than the train the City of New Orleans and clean up will take a while. The hard hit beach areas and pool level of hotels and casinos will be muddy and messy and Zeta will be a employment producer as insurance cat adjusters and construction crews crawl into the area from every direction as everyone tries to put life back together again. It is worth noting this could mess up election issues in some areas but we don’t need to go down that road right now.

As for me I’m going out and about to see the stronger winds that should come through Raleigh in a bit, before the second punch of cold wind comes through tonight. Again we had a Isaias sort of storm earlier in the season and this is a similar set up as the front ran away with the storm.

The next storm could form in the Caribbean or possibly off the SE coast as the next strong front goes flat leaving behind an area that could develop into something. Time will tell.

I’ll update later this afternoon, I want to be out and about right now and see what Raleigh sees.