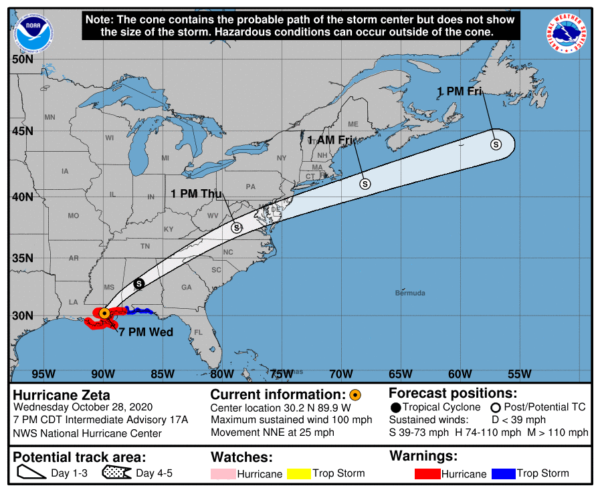 DISCUSSION AND OUTLOOK
———————-
At 700 PM CDT (0000 UTC), the center of Hurricane Zeta was located
near latitude 30.2 North, longitude 89.9 West. Zeta is moving toward
the north-northeast near 25 mph (41 km/h) A faster north-
northeastward motion is expected through tonight followed by an even
faster northeastward motion on Thursday and an east-northeastward
motion early Friday. On the forecast track, the center of Zeta will
move from southeastern Louisiana into southeastern Mississippi
during the next hour or two, and then move across the southeastern
and eastern United States later tonight and on Thursday.

Radar and surface data indicate that maximum sustained winds have
decreased to near 100 mph (155 km/h) with higher gusts. Weakening
will continue to occur while Zeta moves over the southeastern United
States on Thursday.

Overtopping of local levees outside of the Hurricane and Storm
Damage Risk Reduction System is possible where local inundation
values may be higher than those shown above.

RAINFALL: Areas of heavy rainfall, both in advance of Zeta and
along the track of Zeta, will impact areas from the central Gulf
Coast to the Mid-Mississippi and Ohio Valleys, and eastward into
the southern to central Appalachians and Mid-Atlantic today through
Thursday. Rainfall totals of 2 to 4 inches with isolated amounts
of 6 inches are expected across these areas, resulting in flash,
urban, small stream, and minor river flooding.