While each of those deaths is a tragedy for their families and friends, without weather science it is likely there would be a hundred funerals being planned rather than seven. That is especially true since several of the violent tornadoes occurred in darkness. The forecasts and warnings made all of the difference.

I was awakened by the sirens and sheltered in my hallway. I was sheltered when the tornado hit.

Unfortunately, the mainstream media still doesn’t get it. It wasn’t “luck.” 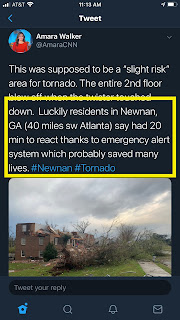 There are several aspects of yesterday’s storms I wish to discuss with you. 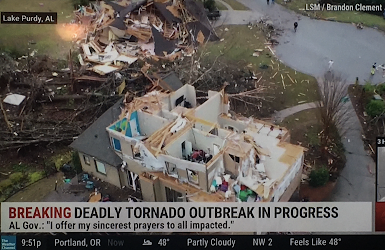 The Weather Channel aired the above photo and it illustrates one of our safety recommendations: Take shelter in the basement or lowest floor. Generally speaking, the lower — the better.

The next recommendation validated by yesterday’s storms was: while in your basement, take shelter under a stairwell or substantial furniture like a pool table. 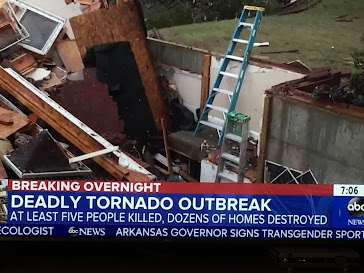 You can see how debris trapped the two residents for a while. Neighbors had to bring ladders for them to escape. But, this situation shows how important it is to have something to protect you from collapsing debris.

The public relations people employed by Big Climate have already begun to try to use yesterday’s tragic tornadoes to sell you on catastrophic global warming. 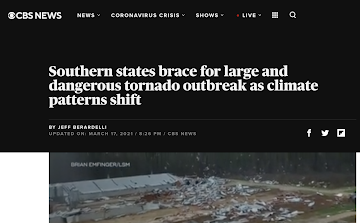 This is incorrect for three reasons:

On Wednesday, ABC TV meteorologist Ginger Zee posed with her mentor, Birmingham’s legendary James Spann, in his trademark “respect the polygon” pose. The were trying to build awareness that major tornadoes were going to occur the following day (yesterday). 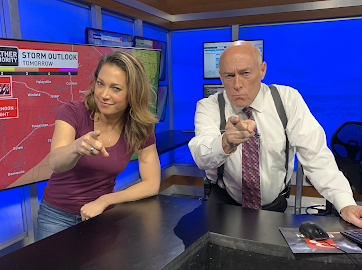 What no one could know was that James’ home would be struck, with his wife at home, during yesterday’s storms. I was watching at the time and James continued his life-saving work even though he had become a victim of the storm (his was wife was in shelter and okay).

This is what I mean by courageous meteorologists. Another example: May 3, 1999, three WeatherData, Inc meteorologists had their homes heavily damaged by a tornado in south Wichita but continued to work until the threat had ended.

I believe Ginger is working on a story about James’ experience for this evening’s ABC World News Tonight.

All of weather science should be extremely proud of our work yesterday: Dozens and dozens of lives were saved.