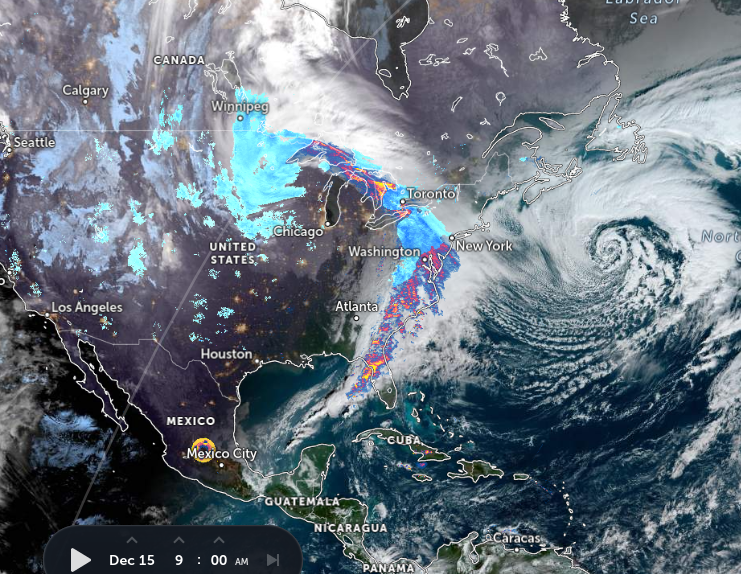 Our storm system is on the move!

Snow to the North….

..extremely heavy rain in the Soiuth.

Check out that low in the Atlantic.

The tornadoes yesterday snaked through the Deep South, along the coastal communities killing 3 people and destroying the fabric of many people’s lives as parts of their homes were ripped away in a way that only a tornado can do. They are called “Finger of God” by  many for the shear randomness of who gets impacted and who is spared. A tornado can slash through a neighborhood taking two or three homes and sparing the rest as if nothing had happened on the block and yet depending on shear location of your home! And, yet it’s a scar that is there that shakes the whole area and reminds them of the randomness of the tragedy of tornadoes. Once your life has been touched by a tornado even if only a home across the street, down the block you are touched forever by the reality that out of nowhere, suddenly destruction happened. That happens when there is a fire on the block where you live, you never forget it.

Hurricanes are tracked for days, weeks sometimes as now days we watch Invests that form off of Africa working their way towards the Caribbean, up through the Yucatan Passage and then moving towards Louisiana. There’s time to prepare, to run or to hunker down with needed supplies. But, a tornado can rip a home from it’s foundation as if the fault line of an earthquake was beneath it’s base. 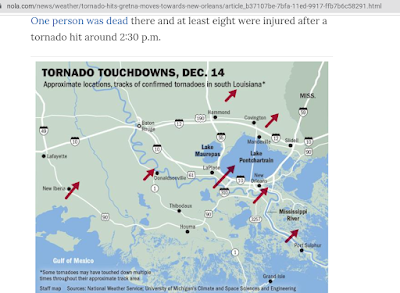 That’s a lot of tornado touchdowns! 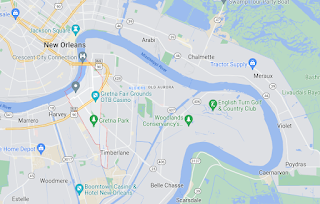 I watched online while talking to my brother on WhatsApp of a radar image and the shape of the Mississippi clearly screamed New Orleans! We both know it well as it’s one of our favorite cities and Nola indeed had Tornado Warnings. On the South side of the river in Gretna one touched down and other places. The river there snakes it’s way in circles through the general area. If you are ever flying in to Nola on a clear day without clouds you must look down, because once you’ve seen it from the air you will never forget it. 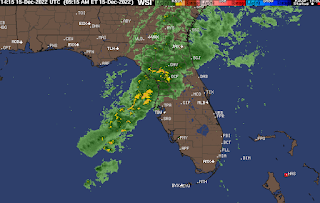 The Southern edge of the front is now crossing Florida. 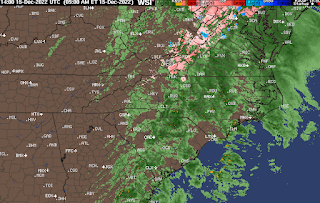 Further North we have rain in the Carolinas.

But UP in the MTNS and high hills..

ICE is the issue!

Divides the rain from the frozen precipitation! 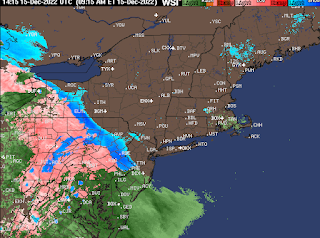 Check out that blue dividing line!

…and the next system down the road.

Kind of funny and chuckling here, because I took this screen shot literally seconds before Mitch said not to run online and start…   Yes, that happened but it shows the reality of the situation in that many parts of the country that are not guaranteed snow may get snow IF the timing is right.

This is the 3rd part of the Holy Grail of Weather Forecasting in the Winter.

Like those movies that end with the two lovers passing in the night in different directions, unaware the other is there … the same sad ending happens if the moisture does not connect or “hook up” so to speak with the strong pulse of cold air. If the moisture misses your area you are left with frigid cold temperatures and warnings to let the faucet drip a bit so your pipes don’t freeze! If they hook up just right, then your neighborhood will look like a snow globe covered in snow!!! Dry Winters rip the heart out of snow lovers as the dryness deprives us of snow. I’m snow deprived myself this December and would love me some snow, real snow falling from the sky preferably in the daytime so I can see it falling in all it’s glory!  The snow shield may dip down into Noth Carolina and possibly even South Carolina IF those models play out. And, as always models disagree on everything. Mitch West Weather can be found on YouTube, he’s good to listen to and we follow eachother on Twitter.

So the last thing I’ll say is …if you are traveling the I-95 corridor today or know someone who may be … make sure you’re careful and go slow as it will be treacherous today.

A lot of good things on YouTube which I use to an excess sometimes when I want a fast round up of news, as most news stations offer their own agendas and don’t actually cover all the news that’s fit to print or was back when people read about the news the day after! Subjects of interest are easy to find on YouTube as is breaking news on Twitter if you know the right words to put in to get the exact news you wish to see as it is happening live!

Saw this story this morning from Thor News about the Soyuz leaking coolant (possibly, they think) which did grab my attention as I do so love news on this topic. Hope they can fix that up fast…. 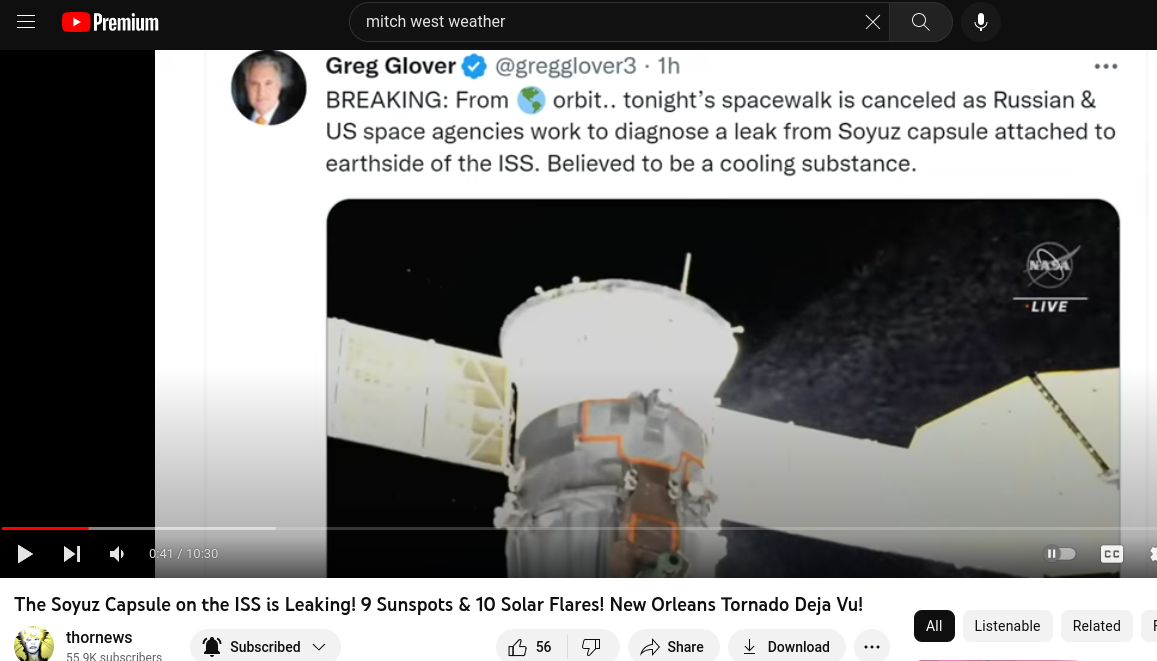 Winter Solstice is next week!

Sorry but we are weather obsessed…

Have a great day.

..end of the year winter weather.

And frigid air diving down into Florida…

Carolinas a bit luckier on that one.

But still… it’s all about timing!!