The snow forecast remains on track for Friday evening and as discussed in last night’s post seen below. I’ll skip the setup, which is discussed a bit more in the post Wednesday night and cut right to the chase.

A Winter Weather Advisory is in effect for the entire metro from 6pm Friday to 6am Saturday, which means this winter event is likely to be an inconvenience, but not necessarily a threat to life and property.

Rain chances increase by late afternoon with rain changing to snow from west to east around 6pm as temperatures drop from their high near 60 degrees to the mid 30s. (This is a bit earlier than mentioned last night.) We’ll get a few hours of snowfall before it starts to taper off by midnight, with a few flurries sticking around into the wee hours of Saturday as temperatures continue to fall into the 20s on strong northwest wind.

Snowfall totals will likely be around or just above 1″ in the immediate metro with potential for up up to 2″ more northeast of the city and up the I-40 corridor further into west TN. This amount of snow is most likely on grass and exposed surfaces, not on roads, which should fare decently given temperatures in the mid 50s to near 60 in the early afternoon hours and early day sunshine. During the period of heaviest snow in the evening hours, some accumulation of wet snow or slush is possible on residential and secondary roads, as well as overpasses and bridges. Main roads and interstates could also get a bit of slush if the precipitation is heavy enough during the height of the event.

You’ll want to be cautious of the road conditions Saturday morning, as temperatures plummet through the 20s overnight. Despite wind that will help dry roads, slushy areas or standing water could flash freeze. Sunshine and temperatures in the mid 30s will be very chilly Saturday, but it will be enough to take care of any slick spots on the roads.

Stay with us on social media throughout the event for the latest conditions and last minute updates! Links are at the bottom of this post or use the free MWN app to follow our social channels.

Just when you thought winter was over…. 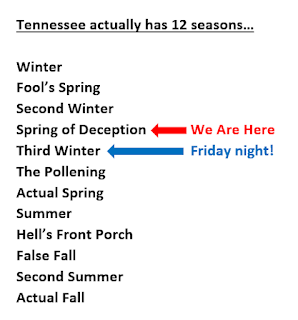 Last week’s beautiful weather gave way to a chilly and damp day Monday, but the sun shone again today and temperatures are warming with more sunshine tomorrow as highs reach the lower 60s. Friday will start off like a decent spring day with sunshine and decent temperatures again… but what’s lurking just over the horizon is “Third Winter,” which will last for about 48 hours. We can then begin another warm-up and “The Pollening” as we head into real spring! Tonight’s blog will focus specifically on those 48 hours, and really mainly the first 6-12 of them… and boy will they be eventful!

After reaching about 60 degrees on Friday, a cold front will move through the Mid-South. You’ll note a wind shift to the northwest and gusty wind as skies cloud up. Temperatures drop very quickly behind the front – falling through the 50s in the afternoon, and then the 40s and 30s in the evening. Initial rainfall that starts by early evening is likely to change quickly over to snow, most likely by around 9pm. Snow could be steady to maybe even heavy at times for a couple of hours before tapering off as quickly as it arrived, shortly after midnight. The 10pm to midnight timeframe is our best educated guess at when the steadiest accumulating snow will fall.  If you are heading to the Grizzlies game that evening, it could look like a snow globe outside after the streamers fall inside. 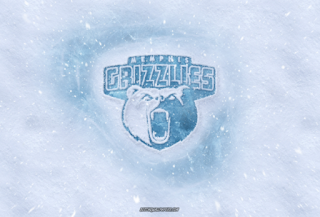 Temperatures will continue to fall on gusty wind and bottom out Saturday morning in the low to mid 20s. The sun will be back out Saturday, but cold air pouring in from the northwest on gusty wind will likely keep the mercury from reaching 40 degrees Saturday afternoon. (And in mid-March, with full sunshine, it’s pretty hard to stay below 40!) Another cold night is in store Saturday night with lows in the mid 20s once again, but we’ll start to moderate during the day with continued sunshine and high pressure moving to our east, allowing southerly wind to warm us into the upper 50s.

Q: How much snow will we get? Any ice?

A: If it weren’t falling on warm roads and ground, it might amount to a couple of inches. Instead, roads are probably going to survive pretty well as most of the snow melts on contact. Grass/mulch/bare ground and exposed objects could see an inch of snow cover, perhaps more north of the Bluff City, and likely less in north MS. The cold air arrives so quickly (near the ground and aloft) that ice is not expected.

Q: What is the confidence factor in this event?

A: We’re still a couple days out, but models are pretty well in alignment, and all have been poking at this event for a few days now. Confidence is high that we’ll see snow and the overall timing (primarily 9pm-midnight), and medium in the amounts. I’m a bit less confident it what it will look like Saturday morning when we wake up.

Q: What about freezing overnight with lows well down into the 20s?

A: That is one of my biggest questions marks. I expect that most roads will be fine. There will be lots of wind and cold but dry air once the system departs Friday night. Some areas that get puddles before the snow starts could “flash freeze” overnight as the temperature drops so quickly. If you will be out early Saturday morning, watch for pockets or patches of ice. I would not cancel any travel plans Saturday if you are headed somewhere warmer (and I also won’t blame you!). 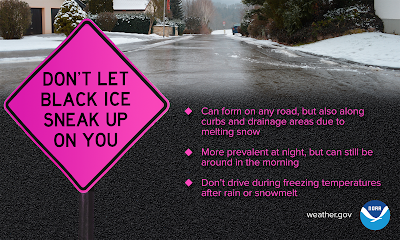 A: I know right? I’m in sales not production, and there are times the family goes hungry…

It’s honestly not completely unusual to get a “last gasp” of winter, including snowfall, in early March. This is a bit late, but the latest recorded inch of snow is March 29. And despite the fact that any measurable accumulation on Friday will set a snowfall record for the date, there are actually four events on record that occurred later in March that dropped more than 4 inches. FOUR INCHES! So while it might be rare, it’s certainly not unprecedented. So let’s get it over with and move on to…

Monitor our social media feeds for the latest information and any changes between now and Friday night.