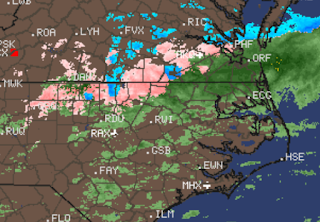 As I sit in Raleigh watching the radar tell me it’s snowing I stare outside and only see a misty rain. I go out on the balcony, put my hand out and feel the little drops and well if it’s snowing it’s melting on it’s way down but I really shouldn’t complain because it’s winter and it’s naturally air conditioned air and we will see what happens this coming week as one system after another is forecast to slide by flirting with Raleigh but not stopping for a cup of coffee and chocolate chip cookies. Sometimes I see a flake fall as if they are playing peek a boo with me. 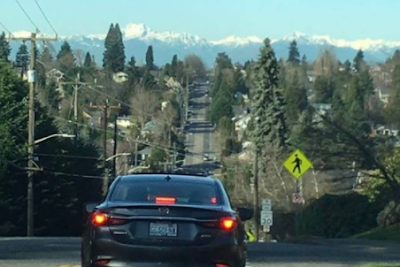 What a morning drive……

Hills and dips and water and mountains.

Seattle really has it all.

But I’m in Raleigh today.

My son in Seattle sent me pictures last night of the snow beginning to fall on his backyard and a year ago I was literally in Seattle missing snow in Raleigh, but I saw snow on the mountains and love Seattle weatherwise and otherwise so that was good. My daughter-in-law who spent a good part of her life in Postville Iowa does not like snow so hoping she’s hiding away in her office listening to music with her headphones on as she often does when she wants to block the world out.

Today is the first day of the Hebrew month of Adar, which means Spring is around the corner but not before Winter takes a few last shots and reminds us it’s not over til Mother Nature says it’s over. The Hebrew Calendar goes by a lunar cycle and every once in a while we have a random leap month (yes I said a leap month not a leap day) so I’m watching the parade of time listening to and watching videos from an outdoor wedding in Hollywood Florida last night. If you are going to do an outdoor wedding in Florida as if you are in California then February is the month to gamble on no rain falling on your parade and it looked all enchanted and bouncy and happy. Life goes on during the Pandemic as people meet, get married or just decide it’s time to make a commitment and celebrate life. Celebrating life is good.

In 2 weeks we have the Jewish Holiday of Purim which is a happy festival where usually people have parties and dance and there’s lost of booze and music and well last year’s parties at the very beginning of the Pandemic intrusion is what kicked off the waves of illness and death that gripped our news feed in the same way that Mardi Gras was not kind to New Orleans last year. Yes, those equinox holidays such as St. Patricks’s Day that slide by in late February and early March as Spring is just around the corner. 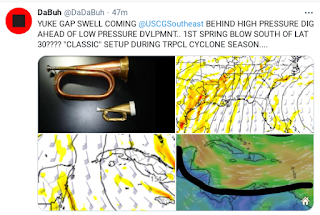 It’s called the March of Time.

But what’s important to remember is……

i in the suThere’s something about the clash of the seasons that brings out the wildest weather. Deep into any particular season when people begin to make lists on what to plant in the Spring or where they will go swimming in their new bikinmmer Mother Nature pulls the rug out from underneath their summer dreams and slaps them with snow and ice. In Texas a pile up of over 130 cars on an elevated freeway made for a sad deadly disaster.

The worst storms always come this time of year.

Be it Hurricane Season about to end….

…or late into the Winter.

It’s not over til it’s over.

It won’t begin until it begins.

Note the second front behind this one…

.. moving West to East across the USA.

My brother in Greece got snow.

Yes, I am keeping track!

We had a thunderstorm yesterday….

So take it day by day.

Yes I am watching loops ….

…but mostly just taking it one day at a time.

Today begins my Hebrew anniversary, Tuesday is Fat Tuesday so party hardy but safely, Monday is President’s Day so take your choice of holidays to commemorate or ignore. The year I got married it was actually Fat Tuesday because I’ve never been known to ignore a holiday I enjoyed so I’ll dig out my love beads, bake a cake or buy one and I’ll keep watching the weather. Day by day we inch closer to Spring and then Severe Weather Season and Hurricane Season. This is the way weather people tell time, but the seasons that bring us the weather we follow, enjoy and never ignore.

Ps…. this is the song of my hour, love this song and it’s a good video…. as two incredible singers come together to joyously sing about God the King. If you aren’t into religion, just enjoy the music as it has a great beat and kids dance to it at weddings and I’ve been known to dance to it in the kitchen while cooking.