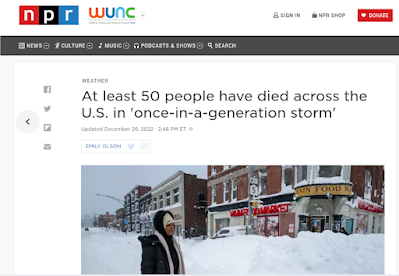 Buffalo is what we will remember…. 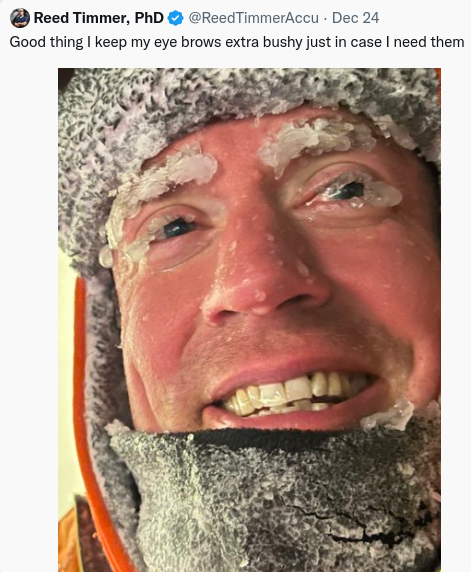 He will chase any type of real weather.

For many of us not living in areas where snow covered the driveways or ice encapsulated our homes making them look as if a Winter Wonderland Castle dropped down from the wintry skies…. for many of us it was about the Winter Travel Mess that happens when a Wild Winter Storm hits during Christmas Weekend! I mean it’s the holidays….choose the one you celebrate or just celebrating time off from work and most people want to hit the road or fly off to see their family. Christmas Vacation is a thing and who doesn’t want to be “home for the holidays” as the song goes?

In my world I felt badly wishing for snow when my husband and some friends were working hard to make Chanukah Programs bests done not in a blizzard in Raleigh. I still prayed for snow but left it in God’s hands and whatever happened happened. Nothing happened. No snow. And, when it’s 10 degrees in late December and you don’t have any snow you feel cheated. Raleigh is filled with people who moved here to get away from the snow or people in Florida hoping to get some snow; there are some locals who do love snow so ……….so we will have to wait until January.

My two youngest kids decided to fly in for Chanukah and an early birthday present for me on the worst travel day of 2022 and luckily got here easily. Apparently that’s a Chanukah miracle. Every headline is about the travel mess and angry travelers stuck in some airport often overnight and or stranded as their connecting flight never got off the ground

Southwest Air is in all of the headlines.

Headlines such as these make people wonder how that could happen, but as I fly Southwest Air often I knew it was almost impossible for it not to happen. I travel to or my connecting flights are often in the areas worst hit by this Winter Storm as many of those citie were and still are snowed in. Southwest Air has one of the most accomodating policies of any airline so I’m surprised by complaints that they weren’t complying with rules. I actually travel Southwest Air not because of their take 2 suitcases for free but their cancelation policies are extremely generous. When my kids in Miami were younger and I moved to North Carolina I would call it “banking with SW” as I’d get a very crazy, cheap ticket on sale and if I couldn’t make it I’d cancel it the same day and the money was there waiting for me to use the next time; no fears of spending the money at some huge sale at Sephora!! The full amount of money, not after deducting most of what the ticket cost me.

“Southwest did apologize for the disruptions, saying that although the airline was fully staffed for the holiday, 23 out of its 25 top airports were affected by the storm”

If you fly Southwest as much as I do…you know that it was a particulary crippling storm for their airlines as well as MANY other smaller airlines in similar situations. I used to love JetBlue for their snacks (seriously) and the planes seemed nicer and there were less corny jokes from the crew on the loud speaker but their cancellation policies were ridiculously pathetic compared to SW so obviously I can live with a bag of peanuts over Blue Chips. I’ll add in here Amtrak has the best cancellation policy around if you like to travel by train the money is back in your back account in days in full. Well it was, as I haven’t taken a long train trip since Covid 🙁 and it’s been preferable to take road trips as we can vacation along the way in favorite cities.

I’m been offline for a few days as I was busy with Chanukah hanging out with the kids and I have to tell you they flew in on Thursday evening as the storm began to the West of me and I considered it a miracle they got here without problems. They flew American. They left when the storm was at it’s worst and all the news was about Air Travel shutting down and then they got back to Miami without a problem on Sunday. Why is this a big deal? Because usually the plane you take back to Miami is coming in from Chicago, Detroit or Buffalo. I imagine American did a good job rerouting and again 23 of their 25 airports were not shut down from the Winter Storm! People don’t understand it’s not about the weather where you are taking off but where the crew and the plane is flying in to and if the plane or crew is snowed in you aren’t going anywhere anytime soon!

Another son was flying up to Tallahassee from Miami to be with my daughter-in-law who was with her family for the holidays and their daughter Olivia’s birthday. He paid extra money for early morning direct flight to be there in time for a late breakfat and no the plane did not take off. They rerouted him hours later to a flight from MIA to Charlotte in North Carolina and knowing Charlotte was hard hit by the storm and many places were without power I thought he’d never get back to Tallahassee but he got into Tallahassee around 6 PM. He spent the day in Charlotte Douglas Airport in flip flops and shorts. Those of you who follow Mike on Spaghetti Models can just pretty much picture Mike taking a fast flight in Florida and ending up in the middle of the Winter Storm in his shorts and flipflops. But he did get their for Olivia’s 5th birthday so it was a win in the end.

As for me I’m parked in Raleigh currently hoping to stay here til it snows or until hell freezes over and as it’s that sort of Winter… I have extreme confidence it will happen soon enough. If not I’m scheduled to be in Denver in March hopefully the snow will still be there.

As for the WEATHER….. it’ll be thawing out over the next week or so. 69 degrees on Sunday and in the low 70s next week so I’m thinking on going to the beach. I mean seriously?? But…. there is more winter weather coming down the road. 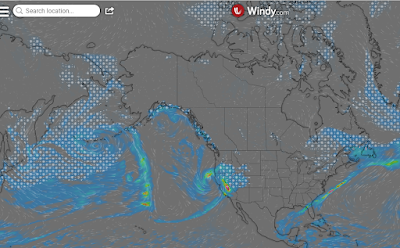 As those systems move East…. you’ll see what I mean. 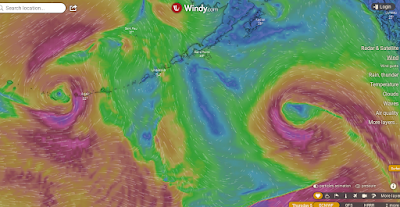 Close up and personal!

A week from this Thursday.

As far out as it gets.

Get a suntan while you can FAST!

I know most of you are dreaming of the beach.

Works for me too….

Enjoy the music and the dream…