Skip to content
Many of us are suffering “weather whiplash” as spring seems to have arrived quickly once the snow melted! After setting multiple cold and snow records during a bitter spell in the middle of the month (average temperature of 19.8 degrees between February 11-19), much of Memphis saw the 70 degree mark on Tuesday and approached it again Wednesday. We’ve now entered a rainy stretch, as a frontal system wavers across the Mid-South from south to north and back south again this weekend. The wet period started with 2.20″ of rain on Friday, with more to come. A Flood Watch is in effect for the metro on Sunday. 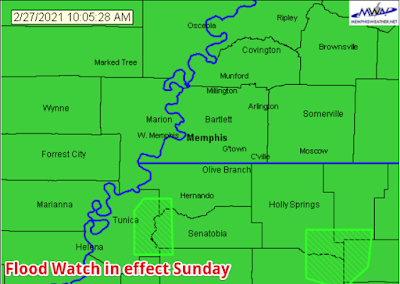 The front that will be the focus for the heaviest rainfall this weekend starts south of Memphis Saturday morning with low clouds and patchy light rain with temperatures in the low 50s locally. As the day goes on though, that front starts to lift north as a warm front this afternoon. This will bring higher rain chances, and perhaps a few thunderstorms, to the metro mainly between 3pm-8pm.

The warm front also brings warming temperatures and a return to southerly wind tonight. Expect to see the mercury rise to the mid 60s by late afternoon and then stay there overnight with a breezy south  wind. Once the front-induced rain moves to our north this evening, only spotty rain showers are expected overnight, with the focus of heavy rain shifting to our north. After 2″ in the past 24 hours, we could see up to another 1/2″ of rain with the front later today.

The day dawns with very warm temperatures in the 60s, breezy south wind, and the warm front sitting well to our north. However, a cold front will make its approach during the day, overtaking the warm front and pushing through near sunset. Heavy rain focus in the morning will be to our north but a few showers are possible in the greater metro as temperatures make their way back to 70 degrees by lunchtime.

During the afternoon, scattered showers become more numerous with daytime heating and the front approaching. With plenty of moisture in the air, a warm and unstable airmass in place, and sufficient wind energy overhead, expect the front to slowly move in by late afternoon. It will bring plenty of rainfall to already-saturated ground, as well as thunderstorms. A few of these storms could be strong. Right now, that threat appears to be late afternoon to early evening and includes strong wind gusts and an isolated tornado. A Marginal Risk (level 1/5) for severe weather is in place for the entire area. 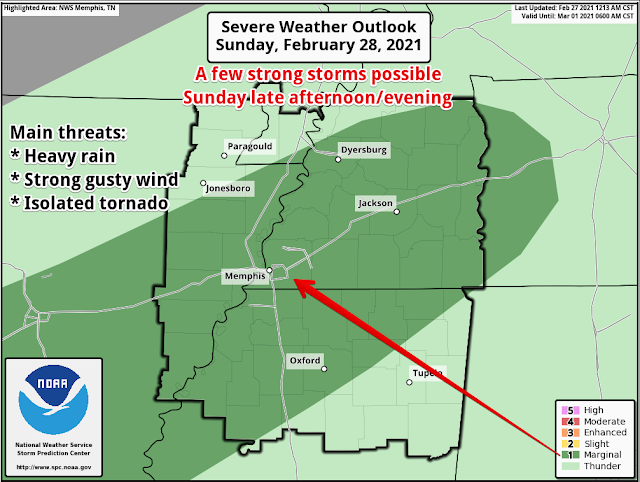 Rainfall totals from Sunday morning through Monday morning could exceed 2″ in spots and most will likely get at least 1.5″, bringing the total for the weekend to around 2″, locally more, for many of us.

Rainfall taper off Monday morning and anything we get Monday should be light. Some sunshine may peak out Monday afternoon  with temperatures closer to average – mid 40s in the morning and mid 50s in the afternoon.

Another system moves through the region on Tuesday afternoon. Models disagree on its impacts due to their party line hold on the strength of the system. We’ll go with scattered showers mainly Tuesday afternoon for now with temperatures slightly cooler than Monday.

Model data concurs on a dry and mild Wednesday with highs in the upper 50s after a cool start. Then we get more disagreement heading into the end of the week on rain/no rain. We have low chances each day for now until we see some model agreement and since it’s still nearly a week out. Highs will generally be in the 60+ range with lows in the 40s. The magic 8-ball says “signs point to” a drier stretch after this week for a while!

So now that winter appears to be behind us (with “round 3 of winter weather” nowhere in sight, despite claims from at least one weather hype-site on Facebook earlier this week), it’s time to begin turning our attention to spring hazards, including flooding and severe thunderstorms, as the pattern warms with the arrival of March – and just in time for Severe Weather Awareness Week in Tennessee! Enjoy your weekend and keep the umbrella and your MWN app with radar and the MWN Forecast handy!