…but not around here.

Weather is always locational and seen from the perspective of your own location’s weather. If South Florida didn’t get a real hurricane in 2020 it was not a memorable busy hurricane season, yet if you lived in Louisiana it’s a hurricane season you will never forget. In parts of New Jersey, New York and New England this last snowstorm was memorable indeed. There were other big bad snow storms in those areas but over the last few years snow storms haven’t been all the rage. Check out the one below from way back when and if you have a relative that was in that area … ask them which snow storms they remember. Gotta love old news reels… and you thought the media hypes the news now?

For me one of my biggest problems, other than I’m not getting one, is that the models are iffy on what will be coming down the pike but in some areas up there the temperatures are not climbing much and it will look as if they just had a snow storm for days going into weeks as the Polar Vortex seems to be trying to make an appearance this winter finally. Last year it snowed in Raleigh when I was in Seattle in February, this year has been much like last year so I’m wondering if there is any frozen precipitation in my future here. Do I really need to move to assure myself of at least one winter storm every year? In truth we did have snow but it mostly fell at night and melted by noon… and that’s why so many Northerners are moving to this area because they get the seasons and a taste of winter but it melts faster than the Wicked Witch in Oz after water was tossed on her. 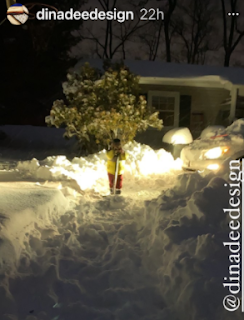 This post really is about what it is to have kids up north who call you and turn their phone cam around to show me their mother the snow falling on wide suburban streets in Brooklyn, grateful for that beautiful view in real time from Shayna’s phone.  Yes, Brooklyn in some parts of Flatbush is very suburban. My daughter Dina though is at the epicenter of the snow storm in upstate New York as they had way over 24 inches… closer to 3 feet depending on snow drifts and the snow drifted often as the wind was blowing it everywhere. My Grandson finally escaped the house… okay she let him help try and dig out the driveway or a path to the street where the school bus comes in the morning. Yes, school buses run up there in winter storms as historically it’s snowy in the winter; my husband took his skis to school with him in his teens so he could ski after school…tho he did live further up the road but Monsey looks like a Winter Wonderland these days. 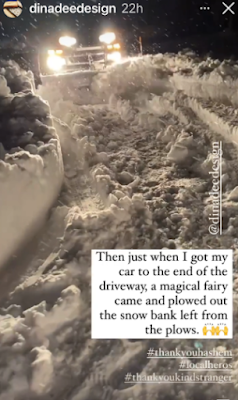 Really very sweet of him to stop and help! 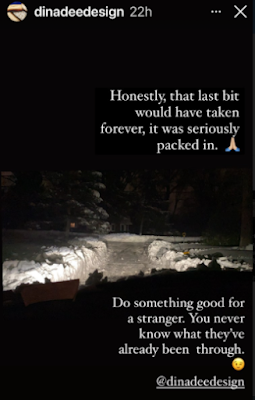 So this is dedicated to the kind soul…

… and my daughter who said.

“Do something good for a stranger…”

And then…….my grandson who loves snow.

Got to make a snow angel! 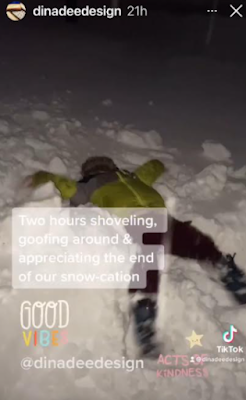 Enjoy the weather, live in the moment.

Give thanks to people who do a good deed.

Will it snow again this coming week?

Probably, there’s a pattern setting up.

And the Groundhog says 6 more weeks of winter!

..she makes art out of everything!

Her work is in stores up that way…

..and she has done shows before Covid. 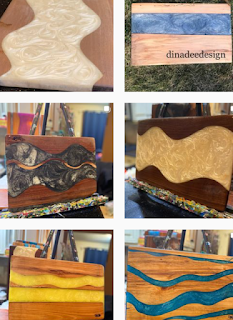 She even does special requests.

This is reclaimed wood by the way…

..she cuts it herself.

Yes, those are bullet casings in epoxy.

A girl ordered one for her boyfriend.

Dina made an ashtray with drill bits also.

What would you want in epoxy?

When God gives you talent… use it.

She paints… she creates.

She plowed, they plowed… in the beginning it’s a game and after a while it’s not a fun game. But hey ya gotta do what ya gotta do so she plowed. Then a person who said they were a neighbor around the corner who didn’t know her stopped and offered to plow with his big shovel on his truck because they do that up there also… now I get why they drive around with the big shovel in the winter looking all that and well those who have the shovel on their truck can get in and out of their driveways. They can also help others or offer to charge people $150 to dig them out which seems high considering they simply drive up and back up but hey it’s a capitalist world and somewhere there is always an opportunity to make money be it using a buzz saw to take down the tree that’s laying across your front door after a hurricane or dig you out in a snow storm. Weather always provides money opportunities though it takes a big bite out of the economy as well when people can’t go out to work or shop.