BIG CHANGES AHEAD: The sky has become cloudy across Alabama this afternoon, and some light rain is now falling over the western half of the state. Rain becomes widespread later tonight, and a few strong storms are possible across the southwest part of the state. SPC now has the southern part of Mobile and Baldwin counties in a “slight risk” (level 2/5) overnight, with a “marginal risk” (level 1/5) as far north as Linden and Fort Deposit. 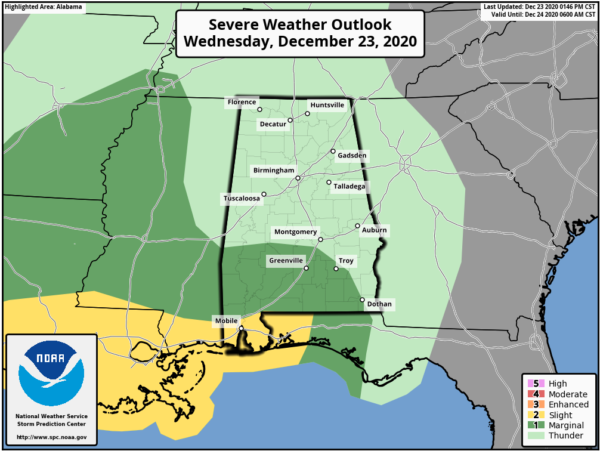 Storms over Southwest Alabama late tonight could produce strong winds, and a brief tornado or two is not out of the question. Elsewhere, it will be very windy statewide late tonight and during the pre-dawn hours tomorrow due to a tight pressure gradient; winds could easily gust to 30 mph at times. Be sure and bring in any Christmas decorations that won’t handle that kind of wind very well; a wind advisory has been issued for most of Alabama. Rain amounts overnight will be in the 1/2 to 1 inch range for most places.

MUCH COLDER TOMORROW: We will be in the 40s early tomorrow morning, but temperatures fall into the 30s during the day with an icy north wind. A few snow flurries or snow showers are possible in the cold air, especially east of I-65, and north of I-20, during the afternoon and evening hours. For most places, we expect no meaningful accumulation or impact, although the ground could become white in spots across Northeast Alabama (especially higher terrain).

We do note models are hinting at narrow band of lake effect snow coming off the Tennessee River tomorrow night; if this happens it would mainly impact Marshall, DeKalb, and Cherokee counties. A few spots there could see around 1/2″, but we stress this will be a very narrow area.

The sky will clear tomorrow night, and we drop into the 16-24 degree range by early Christmas morning. Roads will be dry by then, and travel impact is not expected. Then, during the day Friday, the sky will be sunny with a high between 35 and 40. There is a good chance Birmingham will remain below 40 degrees; it has happened on December 25 only eleven times since 1900.

THE ALABAMA WEEKEND: Saturday morning will be very cold; we start the day between 15 and 25 degrees. Then, we rise to near 50 by afternoon with a strong December sun. Sunday will be mostly sunny with a high in the mid to upper 50s.

NEXT WEEK: A cold front will bring the chance of a few sprinkles Monday, but moisture will be very limited and significant rain is not forecast. A major storm system will bring rain and thunderstorms to the state later in the week, most likely Wednesday night into Thursday. Too early to know if this will bring a severe weather threat to the Deep South, but it is certainly possible. See the Weather Xtreme video for maps, graphics, and more details.

ON THIS DATE IN 1998: A major ice storm struck central and southeast Virginia and much of North Carolina beginning on Wednesday, December 23, and lasting until Christmas Day morning. Icy conditions caused injuries from slips and falls and numerous vehicle accidents. Ice accumulations of up to an inch brought down trees and power lines. Outages were so widespread with 400,000 customers were without power on Christmas Eve. Some people were without power for up to ten days.