BLUSTERY: West winds will increase later today across Alabama, averaging 15-25 mph with higher gusts. A disturbance will bring some clouds into the state, along with a few spotty showers this afternoon mainly along and north of I-20. Temperatures won’t get out of the 50s over North Alabama, and some spots across the Tennessee Valley might even hold in the 40s all day. The average high for Birmingham on April 8 is 73.

FROST ADVISORY: The NWS has issued a frost advisory for much of North and Central Alabama for early tomorrow morning… basically for areas north of a line from Tuscaloosa to Calera to Roanoke. The sky will become clear tonight, and winds will diminish after midnight. Most places will see a low early tomorrow in the 30-36 degree range… a few colder spots could reach the upper 20s. We note some frost is also likely early Sunday with lows in the 30s again.

The weekend will feature a good supply of sunshine… the high tomorrow will be close to 60, followed by mid 70s Sunday as a warming trend begins.

NEXT WEEK: Moisture increases Monday, and a few scattered showers are likely across the state. We will maintain some risk of scattered showers and storms Tuesday and Wednesday, but the next organized rain event comes late Wednesday night into Thursday morning when a cold front pushes into the state. There will be a risk of severe thunderstorms Monday through Wednesday for areas west of Alabama, but it remains to be seen if severe storms will be a threat for Alabama when the front arrives. See the Weather Xtreme video for maps, graphics, and more details. 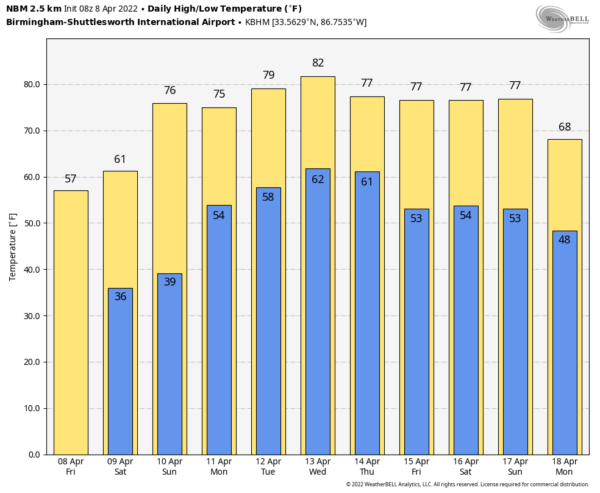 ON THIS DATE IN 1998: A violent F5 tornado cut a 31-mile long, 3/4-mile wide swath through nine Birmingham suburbs including Oak Grove, Sylvan Springs, Rock Creek, Pleasant Grove, Concord, Maytown, Pratt City, and Edgewater before lifting in the western limits of the City of Birmingham. The worst of the destruction occurred across the Oak Grove, Rock Creek and McDonald Chapel areas. Thirty-two people were killed in this tornado including three in Oak Grove, eleven near Rock Creek, four in Sylvan Springs, two in Wylam Heights, nine in Edgewater, two in McDonald Chapel and one in West Ensley.

The same parent storm would drop another tornado that killed two more people in St. Clair County near Wattsville.