When is the foggiest time of the year in the Northwest? 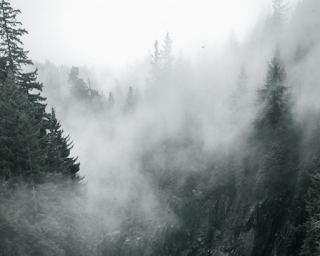 The middle of the winter when we have lots of clouds or storms, perhaps?

Or  during the summer when we have clear skies and a good opportunity for the surface to emit infrared radiation to space?

The answer is….around now.   Early to mid-autumn is our fog season.

Here is a plot of the frequency of heavy fog (visibility of less than or equal to a quarter mile) for various West Coast locations.  For Seattle, the most days with dense fog occur in September and October, with the least number of foggy days in May.  So a maximum in early fall and minimum in late spring.  Similar in Portland and Vancouver, BC. 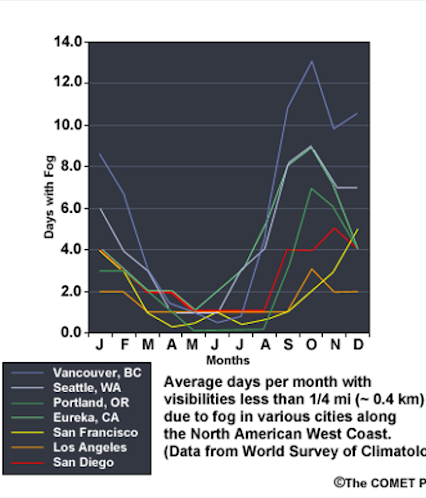 So why is early autumn ground zero for fog?.

Well, this time of the year has a lot going for it if you are Northwest fog.

Most of our fog is radiation fog, which occurs on relatively cloud free nights, with the earth radiating infrared radiation to space, cooling the surface and air adjacent to the ground.  The air is cooled to the dew point, resulting in saturation and condensation of water vapor into little fog droplets.

But why is autumn so fog friendly?  Some reasons include:

So enjoy the fog and low clouds—this time of the year you really don’t have much choice.

Want to support the podcast? Click the Patreon box below.

My blog on KNKX and the Undermining of American Freedom is found here.