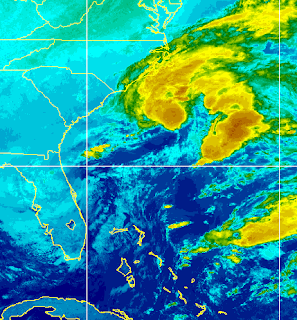 There’s been a lot of talk lately.

And I have stayed out of the Fray…

What is it and could it be tropical or subtropical? It’s weather and it’s kicking up the wind gradient as seen below on Earthnull creating a stormy set up along the beaches of the Southeast coast. First it parked off of Jax and then another area closer to the Caolinas popped up and it’s handing energy back and forth like a quarterback passing to a receiver who then throws it back to the quarterback who then tries to throws it downfield ……….usually, but not always, those plays don’t play out well though they do get a lot of airtime play on the nightly sports round up as comic relief. Sometimes it produces a touchdown, but more often not and that’s where we are today with this system.

But what is interesting is the pattern that produces it and the models that keep trying to produce a real semi tropical/subtropical low in that area and add that in with fronts still moving around in that area now doing the “how far down into Florida will we really get” dance it’s possible that early season action in the tropics will begin in this area as we have seen often in the past. The area off of the Southeast coast is prime time for early season spins up that do not go far but do create attention and waves at the beach. 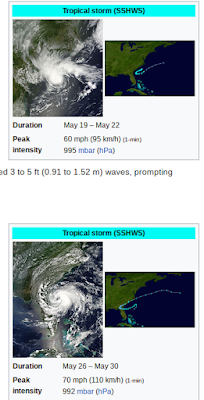 When people say 2012 with regard to the tropics people think “Hurricane Sandy” but Sandy was just an exclamation point to what was a busy season along the East Coast that ended with Sandy going Boo for Halloween!

Just something to think on while listening to the debate online or staring at the loops wondering what is going on with that area known as a coastal low, it hugs the coast kicks up the surf and waits for a ride up the coast or out to sea. Look how tight that gradient is below along the coastline. 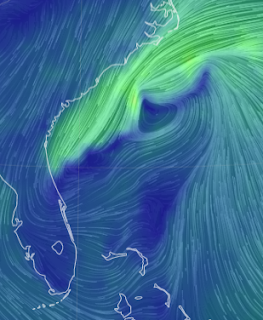 So what is that?

Lots of wind along the beaches. 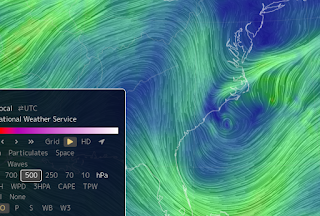 Change the parameters a bit.

Not tropical, not subtropical. 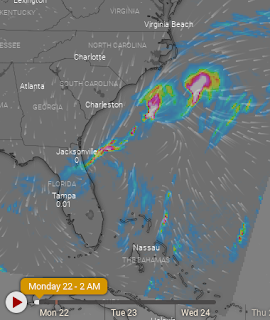 There we are above this morning. 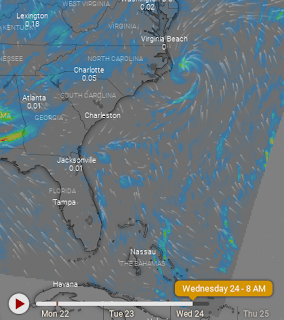 Don’t get caught up in the hype.

Change is in the air. Spring Solstice has come and gone. Storms love to form around solstices and they have been doing it since man first figured out there was a connection between the Moon cycles and the Seasons. Surfers watch waves begin to show up after days of a flat ocean and they stare and watch waiting and knowing things are about to change. Birds show up in the neighborhood on their way somewhere from wherever they have been for the winter. Leaves appear on the maple tree and flowers begin to spring up everywhere reminding you it’s Spring!

The Hurricane Season is 71 days away officially and most likely we will see pre-season action so take this as a sign that everything is working the way it should according to Mother Nature’s time and if this keeps continuing the area will eventually, probably produce an early system that actually gets a name or a designation.  Until then my crew of tropical friends will be running models, watching loops and wondering on early waves coming off of Africa while watching close in to see if something might form somewhere between Cape Canaveral and Cape Hatteras… it’s a breeding ground for early action.

As for be busy with the coming holiday of Passover that takes more preparation than the whole 8 day holiday but which is fun once it gets rolling. May you be well, happy and healthy! Keep your sense of humor, remember to breathe in and breathe out and if you get a chance to look up at the stars or catch a sunset … say a prayer of thanks and enjoy the beauty of the moment.

Soon nuff we will be tracking full time again,