The future of Northwest climate is frequently discussed and debated these days.

Knowing the future climate is very important, because we can take steps to adapt to climate change, saving lives and property. And the threat of unpleasant consequences can motivate society to take steps to reduce carbon emissions into the atmosphere and increase carbon storage in the ground.

A number of politicians have made climate change a centerpiece of their political platforms, and a range of natural disasters (such as wildfires, drought, and storms) have been blamed on increasing CO2 and other greenhouse gases. A free-for-all of name calling has followed this topic with terms such as “denier”, “alarmist”, and “warmest” representing just a few. 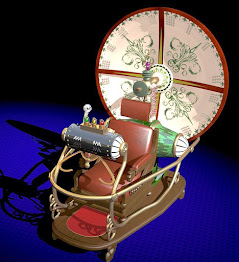 Climate change has become such an issue of contention, that activist groups have pushed to remove radio commentators that don’t follow their line (e.g., Seattle350 pushing KNKX to remove a certain meteorologist).  It has become an issue of almost religious intensity to some with “right thinking” on the topic becoming an important way to demonstrate that one is a true “progressive.”

So let’s  clear the air a bit now.  I will show you the gold standard of projections of what will occur here in the Northwest over the next three decades due to increasing greenhouse gases.

It is a time scale that is short enough that I believe we can have great insights into what weather/climate conditions in the Northwest will be like if CO2 continues to rise.

Each of you can consider the projections and make your own judgement whether it is an “existential” threat, a serious threat, an inconvenience, or an improvement over our current climate.  You decide.

My group (particularly Richard Steed and Jeff Baars) in concert with Professor Eric Salathe of UW Bothell has been working on the most advanced regional climate projection capability of the region.

Each of these simulations was driven by a different global climate model.  Such global models have such coarse resolution that they make profound errors with our local terrain.  Thus, we applied a proven high-resolution weather forecasting model (WRF) to properly simulation regional weather effects, running it for 130 years. 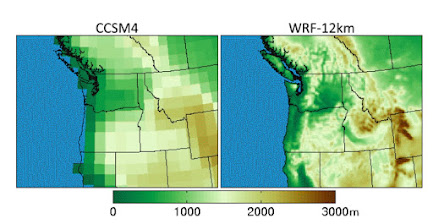 In our simulations, we have assumed the worst case scenario for increasing greenhouse gases (known as RCP 8.5), which assumes increasing use of coal and fossil fuels.  CO2 rising rapidly.

Reality will probably be more benign, as increased renewables come online, the use of coal declines, and hopefully there will be a revolution in the use of nuclear energy (both safe fission and fusion).  And with increased energy sources, sequestration of CO2 (removing it from the atmosphere) become more viable.

Our work demanded enormous computer resources, with much of it supplied by a grant from the Amazon Catalyst Program.  The Amazon folks also helped support some of the researchers that completed and analyzed the output, and guided us in our use of cloud computing.  So a big thanks to Amazon.

What I am about to show you is unique:  no other regional climate prediction effort provides such a high resolution view of the future climate of the Northwest or offers information about the uncertainties in the projections.

There is a lot of talk about climate change bringing drought to the region, so let’s see what state-of-science models suggest.

I will start by show you the change in annual precipitation over the region between 1970-2000 (think 1985) and 2030-2060 (think 2045).  This graphics shows changes in the averages of all twelve forecasts.  The average of an ensemble of many forecasts is generally more skillful than the individual predictions.

For most of the region, annual precipitation will increase by1-4 inches, with some decreases on the lee (downwind) side of some major terrain barriers.  In general, MORE water for our region each year.  Good news. 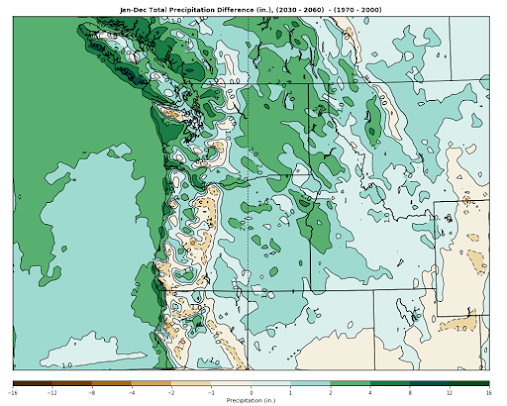 What about during the summer?

For about 2/3rds of the region, amounts will decline, but most of the declines will be small (0 to .5 inches).  The biggest declines (up to roughly 1 inch) will be on the western side of the Cascades and the western slopes of Vancouver Is.   Interestingly some of the region, particularly east of the Cascade crest, will see small increases, with largest increases over the northern Rockies.

Bottom line:  no major precipitation declines over the arid eastern side of Oregon and Washington. 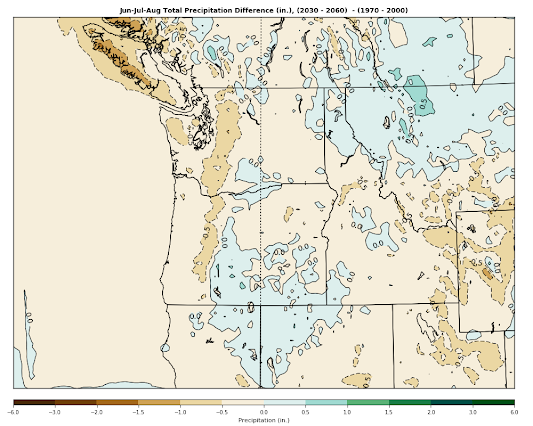 What about Seattle? What can you expect for precipitation and how good are our simulations?  Good question.

The key precipitation period is midwinter…and below is a plot of all ensemble members, the average of all of them (green line) and observed values (black dot) for 1970-2100.

A very small upward trend in winter precipitation through 1950.  You won’t notice it.  Also note that there has not been much trend in the observations either. 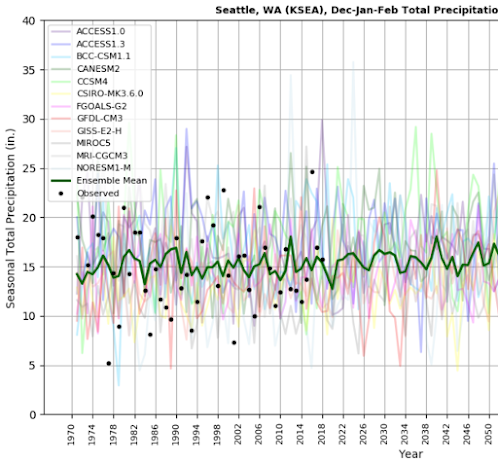 What about summer (June to August) in Seattle?   The forecast is below.

A very slight downward trend.   Summer has always been dry around Puget Sound (typically 2-3 inches in total) and perhaps we will lose as much as .5 inches from global warming by 2050.

How about Omak in the fire-prone mountainous area of northeast Washington? As shown in the projections below, it is a dry place with little trend.

The bottom line of these forecasts is that the precipitation changes through 2050 over our region will be modest, even if greenhouse gases increase rapidly over the next several decades.

Increasing greenhouse gases WILL have a significant impact on our regional temperatures, but how much?  Let’s check out maximum temperatures. 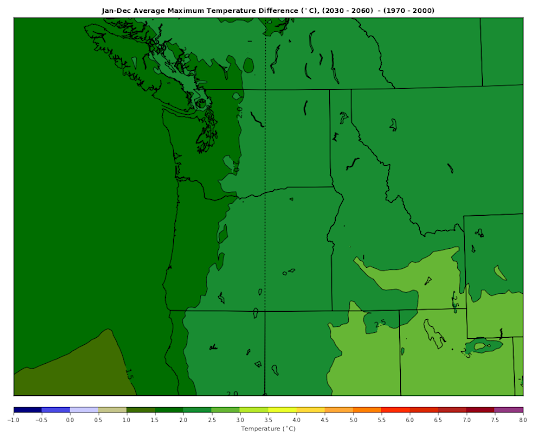 What about the summer, where we worry about heat waves and wildfires?

Clearly larger increases in temperature (see below).  Along the coast, pretty much the same as for winter– 2C or less increase in temperate.  The ocean temperatures do not warm up as rapidly as the land, so relief from heat will remain available from Forks to Astoria to Lincoln City along the coast.

Summer temperatures in Puget Sound will notch up by about 2.5- 3 C (4-5F).   So a typical summer high in Seattle would increase from approximately 76F to around 80F. 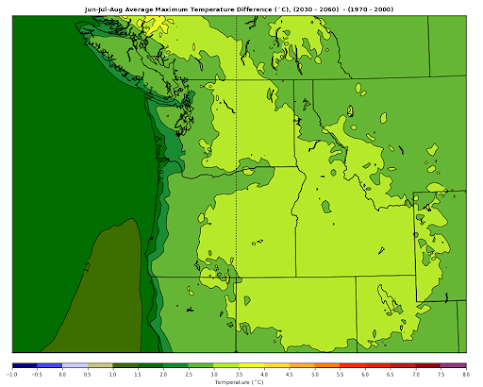 East of the Cascade crest, summer high temperatures will increase 3-3.5C (5-6F), so the typical summer high in say Richland, WA will rise from 88F to 93.5F.  Enough to be noticeable.

Below is a plot of how the daily average winter (Dec-Feb)  temperature (C) will change at SeaTac through 2050. Again, the green line is the average of the ensemble of regional climate forecasts.  A slow increase over time by about 2 C.

The summer temperatures also increase steadily, by about 3 C.   Note in 2020 we have already experienced about half of the greenhouse warming that is expected by 2050. 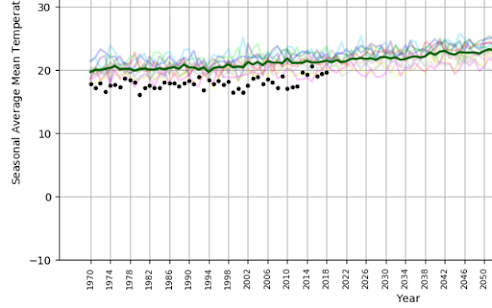 By the way, do you notice that the high-resolution model is too cold in winter and too warm in summer at SeaTac?  This error is probably due to the lack of resolution even of the regional climate simulations, with an inability to define the relatively narrow Puget Sound west of SeaTac.

Omak mean temperatures in winter and summer?  A gradual increase, with summer temperatures going up 2-4C over the period (and we are again about halfway there at this point). 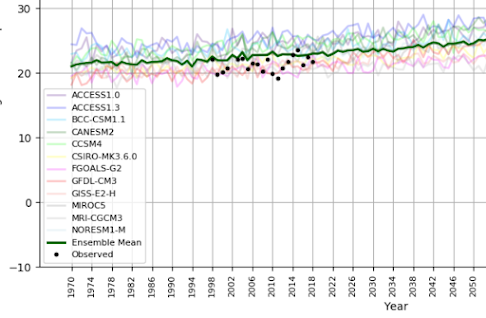 With only a modest rise in precipitation but warming temperatures, one should expect a decline in snowpack–and that is exactly what the regional simulations are showing.

Here is the change in April 1 snowpack (snow water equivalent in mm), a critical measure of melt water availability for the summer, between roughly 1985 and 2045.  Notable declines  (darker brown colors) over the western slopes of the Cascades and the Olympics.  Some increases in eastern WA (from the increases in precipitation). 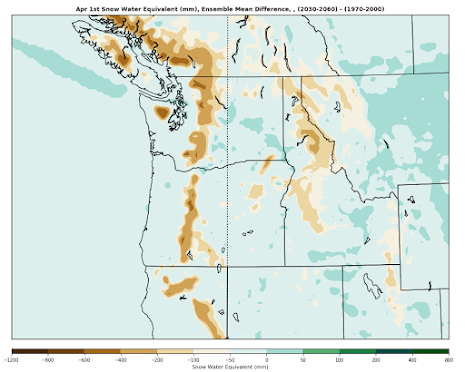 To get a more intuitive idea of the April 1 snowpack change below are the ensemble forecasts and ensemble mean (green line) at Stevens Pass.  You will note a lot of variability in the forecasts and observations–snow amounts vary a lot from year to year for a variety of reasons (including natural variability such as El Nino/La Nina).  Over the entire period through 2050, the snowpack declines from roughly 1000 mm (1 meter) to around 750 mm:  a 25% decline.

It is not clear whether there has much decline so far in the observed snowpack (black dots). 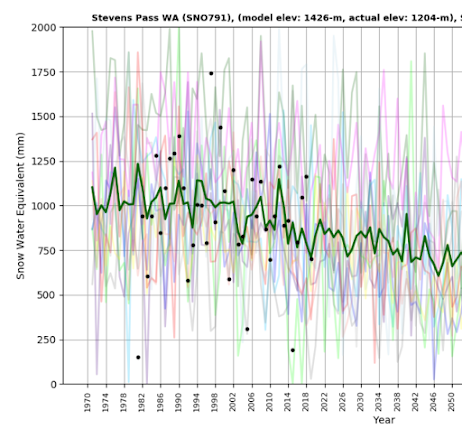 Declines in projected snowpack are less at higher locations, and greater at lower ones, such as Snoqualmie Pass.     Skiing at Snoqualmie is often marginal today and I would not buy a season pass there after 2030.   I suspect skiing will be history at Snoqualmie by 2050.

The regional climate simulations do NOT suggest much change in average daily maximum wind speed (see below) between 1985 and 2045.  The same is true of annual maximum gusts or the strength of approaching Pacific windstorms. 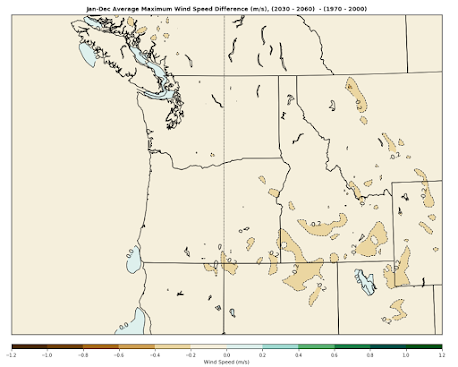 I can provide a thousand more graphics, but you get the general idea.

If the emissions of CO2 and other greenhouse gases continue on their present pace, there will be changes in our regional climate.  In fact, some of the changes have already started.  So by 2050:

Importantly, the model projections do not suggest  any “tipping points” nor abrupt changes in our weather/climate as a result of increasing greenhouse gases.

To say something that will get me in trouble with the climate activists folks, there is no existential threat to our region through the middle of the century.  We will be able to adapt to the modest changes that are expected, although some will be worrisome (loss of skiing at Snoqualmie Pass). 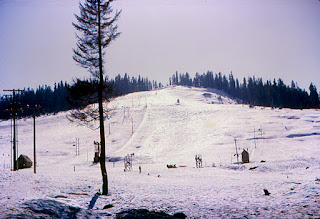 I believe the above is the best available estimate for what unrestrained global warming will bring to our region through mid-century, and I ask that the activist folks and over-the-top “journalists” in some local media outlets restrain their name calling and twitter rage when such information is communicated.   My erstwhile radio station, KNKX, surrendered to the climate activists–hopefully, as the political rancor of this season ends, rational discussion and good science will again be appreciated.

My blog on KNKX and the Undermining of American Freedom is found here. An extraordinary story about Matt Martinez, Director of Content of KNKX, is found here.