Although we expect that the Pacific Northwest will experience a wet, cool, snowy La Nina winter, the opposite is projected for California because of La Nina.  Furthermore, California is going into its “wet season” after a dry fall, and its reservoir system is well below capacity.

I will bring you up-to-date on the California water situation in this blog.

Let’s start with the precipitation anomaly for the last two months:  how precipitation over California differs from normal for the past 60 days.  For nearly the entire state, precipitation has been below normal, but the normally arid southern portions and far western sections only down by 0 to 3 inches.  In contrast, the Sierra Nevada is down 3- 9 inches and some portions of the mountainous northern portion of the State are as much as 9-15 inches less than normal. 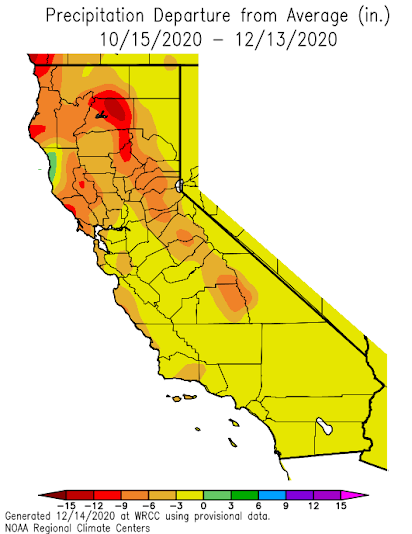 It is interesting to look at the percentage of normal precipitation for the same period.  YIKES. Much of California has received less than 25% of normal for the last two months, particularly southern CA.  This shows you the dangers and potential deceptive impressions of percent of normal plots….in places of little precipitation, just a modest shortfall can create scary low percentages of normal.  But the implications of such small deficits may not be significant. 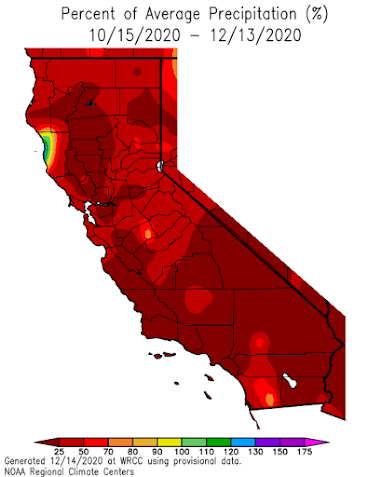 And then there is  the impressive California reservoir system, which has the capability of holding MULTIYEAR water supplies.  Very different than our region, where our reservoir capacity if far less (generally a few months to a half year).  Below is the latest CA reservoir situation.  The largest reservoirs in the North (e.g., Shasta and Orovile) are significantly below normal, while the reservoirs to the south are near normal. 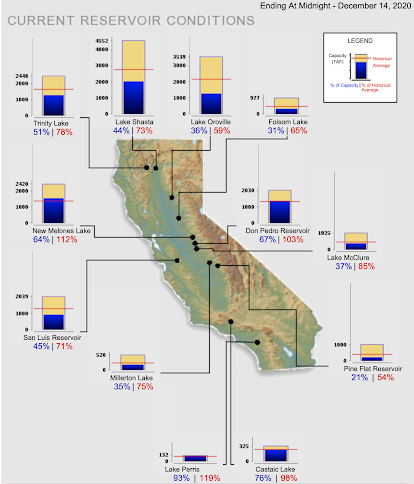 But to get more insight into the filling of the critical northern reservoirs, here is a plot of the current cumulative precipitation compared to normal (blue shading) for this (blue line) and other years.  You see the problem– only about 30% of normal this year and just above the historically dry 1976-1977 uber drought year. And last year was dry year as well…but considerable more than this fall. 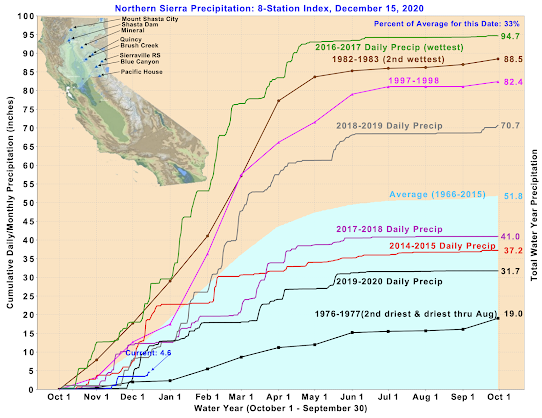 What about California snowpack today?  Ranges from approximately 29% in the southern Sierra Nevada to around 50% in the north.  But these are early days. 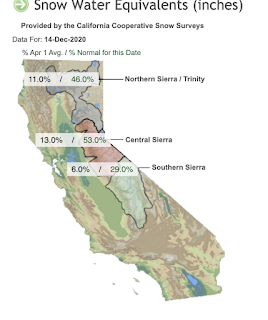 OK….California is starting the season with below normal reservoir capacity and a dry late fall.  The last year has been drier than normal as well.

As noted in my earlier blogs on western U.S. precipitation this fall, California has been dry because of ridging (high pressure) in the eastern Pacific and the jet stream heading north toward our region, western Canada, and southeast Alaska.

A pattern of precipitation consistent with the moderate La Nina that will dominate this winter.

But let’s look into this more.  Here is the precipitation forecast for the next 46 days from the European Center….more exactly the forecast anomaly from normal precipitation.  Drier than normal over the southwest (brown colors) and wetter than normal to the north (green and particularly blue).  CLASSIC La Nina.  But look closely and you see the deficits in the Sierra Nevada are modest–about an inch.  The greatest dry concern is around Santa Barbara. 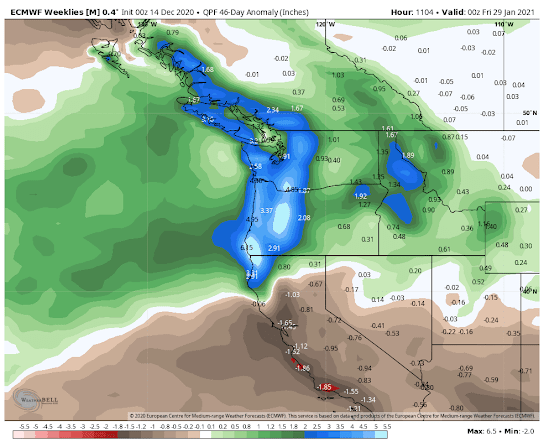 The NOAA Climate Prediction Center has a warm/dry overall pattern for the next three months over southern CA…but near normal for the far northern part of the state with the big reservoirs…that is important.

So, at this point there are concerns, but they may be enough storms going south to prevents a severe drought situation this winter in the Golden State.  Will have to watch the situation carefully.   A dry winter brings water resource challenges and fosters higher elevation fires.

Note:  I will be having a specific online zoom session for my Patreon supporters on Saturday morning at 10 AM.  I will talk about the effects of the eastern Pacific BLOB on Northwest weather and will answer your questions. Patreon information: