La Nina is strengthening and this has a lot of implications for our upcoming winter.

As noted in earlier blogs, La Nina is associated with colder than normal water temperatures in the central and eastern tropical Pacific.  This cold water has global effects, changing the atmospheric circulation around the globe.

Let’s start by looking at the current sea surface temperatures anomaly (difference from normal) around the world (below).  Blue indicates cooler than normal temperatures and there is plenty of that color along the equator along the central and eastern Pacific–that is the sign of La Nina.

Meteorologists have a favorite Pacific area we look at to determine if there is a La Nina:  the Nino 3.4 region (see image)

Plotting the sea surface temperature anomaly from normal for this key region shows the water is colder than normal (blue) and by a good amount.  This is La Nina is now a moderate one, on the verge of strong at times.

The National Weather Service Climate Prediction Center is going for a 100% chance of La Nina this winter. 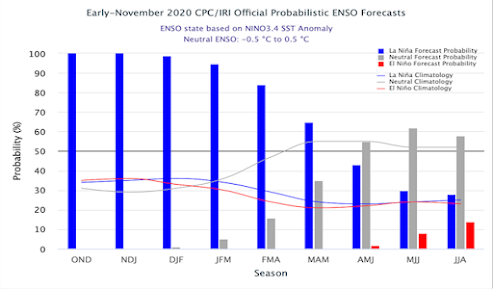 And the model forecasts suggest the cold water anomaly (again difference from normal) will remain large for a while. 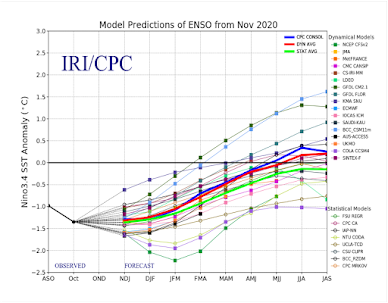 Folks, we will have a substantial La Nina this winter and this has substantial implications for the next few months.  Think cool and wet.  Think snow.

A NOAA/NWS graphic shows the typical configuration of the atmosphere for moderate and strong La Nina years (see below).  The jet stream, the conduit of weather systems, tends to head directly into the Northwest or up in Alaska before it swing back down.  High pressure is often observed over the eastern Pacific during La Nina period…something we have seen a lot of during the past month.  California tends to be dry with La Nina, and that is certainly true this year. 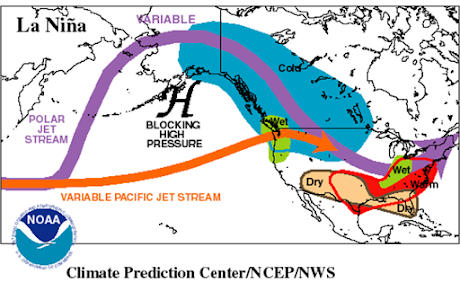 The result of this pattern is that the Northwest tends to be wet and cool during La Nina years, and this is exactly what the National Weather Service is predicting for the next three months (see below).  This combination generally means ample snow in the mountains and often a bout or two of lowland snow.

Finally, let’s look at the latest extended prediction from the European Center…..covering the next 46 days.

First, the prediction of the precipitation anomaly (difference from normal) through 25 January.  Much wetter than normal in the Northwest, but dry over central and southern CA.   Classic La Nina 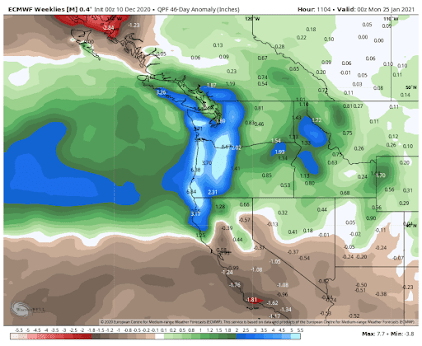 Temperature is projected to be cooler than normal for the same period over southwest Canada, the Olympics and north Cascades and most of Oregon. 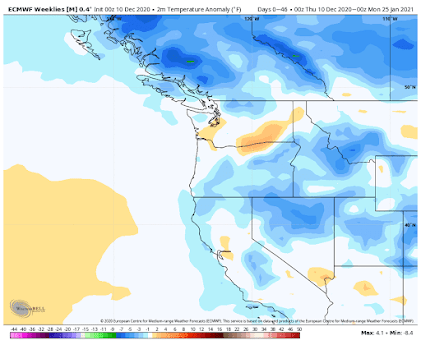 And the predicted snowfall for the period is bountiful. 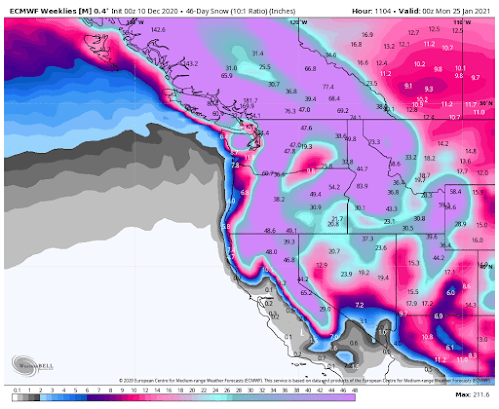 There are no guarantees, of course.  But the meteorological dice are weighted towards a cool, wet, and occasionally snowy winter, which is good for water supply and skiing.