RADAR CHECK: A large mass of rain and storms is over West and Southwest Alabama early this morning in the tropical airmass that covers the Deep South. Unsettled weather continues today with occasional rain and a few strong thunderstorms… all 67 Alabama counties are in a “marginal risk” (level 1/5) of severe thunderstorms as defined by SPC. Heavier storms could produce hail and strong gusty winds, like recent days. 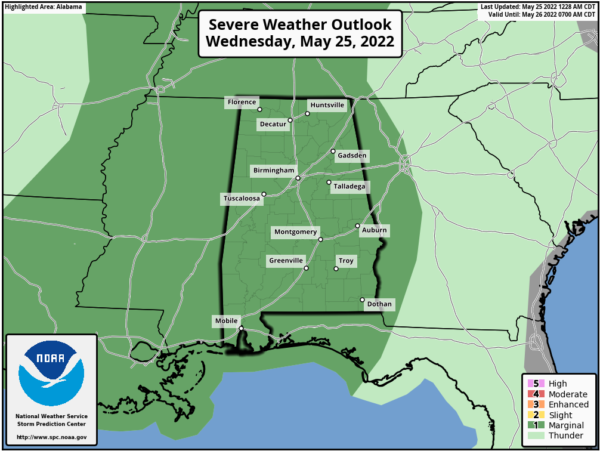 Rain could be heavy at times through tonight; we note a flash flood watch is in effect for the southwest part of the state. Temperatures won’t get out of the 70s in most places because of clouds and rain.

TOMORROW: Not much change… the unsettled pattern continues. Occasional showers and storms are likely tomorrow and tomorrow night, with potential for heavy rain at times. Once again, all of Alabama is in a “marginal risk” (level 1/5), and stronger storms could produce hail and gusty winds. We also have a low end tornado threat tomorrow as dynamic support will be unusually strong for late May. A large mass of morning rain will likely keep instability values in check, but just be weather aware during the day.

Additional rain amounts of 2-3 inches are likely between now and tomorrow night, when the rain will end from west to east. A slot of dry air works into the state Friday, and the sky becomes partly sunny with a high in the mid to upper 70s. A few showers are possible Friday over the Tennessee Valley of far North Alabama under an upper low, but most of the state will be dry.

MEMORIAL DAY WEEKEND: Look for mostly sunny warm days and clear pleasant nights over the three day holiday weekend. The high Saturday will be in the low 80s, followed by upper 80s Sunday. Monday’s high will be close to 90 degrees. Lows will be mostly in the 60s, but cooler spots will be in the pleasant 50s early Saturday and Sunday morning. This is about as nice as it gets in late May in Alabama.

REST OF NEXT WEEK: Dry weather will continue Tuesday and Wednesday… a few spotty showers could show up Thursday and Friday, but nothing too widespread. Highs will be close to 90 degrees… See the Weather Xtreme video for maps, graphics, and more details. 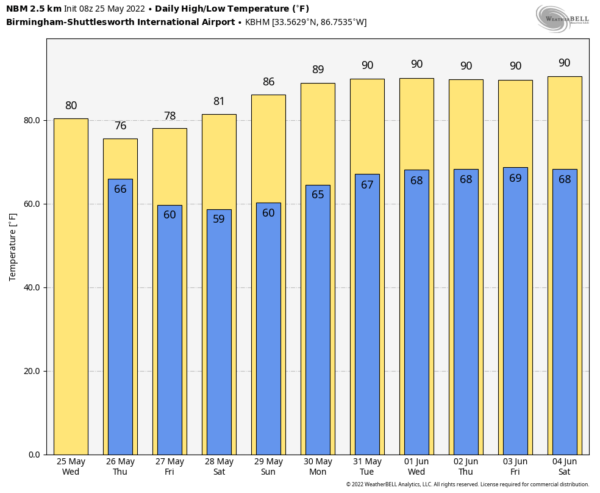 ON THIS DATE IN 1955: An estimated F5 tornado moved north and NNW through the heart of Blackwell, Oklahoma. About 400 homes were destroyed, and many were leveled and swept away. About 500 other homes were damaged. The tornado dissipated just over the Kansas border, as the Udall, Kansas tornado was forming to the east. The Udall, Kansas tornado was estimated to be an F5 as well. Over half of the population of Udall was killed or injured as the tornado completely devastated a large portion of town. Seventy-five people were killed, and many of the 270 injuries were serious.

ON THIS DATE IN 2008: A rare, large and destructive EF5 tornado created a 43-mile long path across Butler and Black Hawk counties in Iowa. This tornado killed eight people, injured dozens and caused several millions of dollars in damage. The tornado was nearly three-quarters of a mile wide as it moved through the southern end of Parkersburg. A third of the town was affected by devastating damage with nearly 200 homes destroyed.