RADAR CHECK: We have a large mass of rain across parts of West, Central and South Alabama early this morning as the unsettled pattern continues across the state. The sky will be generally cloudy again today with periods of rain, most widespread south of I-20. Showers will be more scattered in nature over the northern third of the state, and mostly during the afternoon hours. The high today will be close to 80 degrees, which is ten degrees below average for the date. 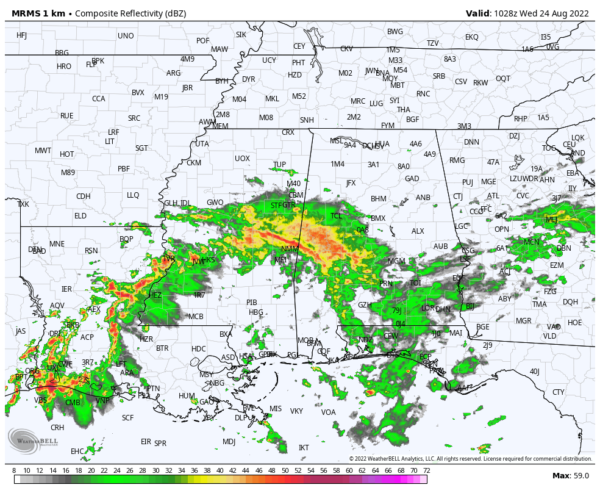 TOMORROW THROUGH THE WEEKEND: Scattered to numerous showers and storms are likely again tomorrow, but showers become fewer in number Friday as the air becomes more unstable. Then, for the weekend, we expect only widely scattered afternoon and evening showers and thunderstorms with a partly sunny sky both days. The chance of any one spot getting wet is 60-70 percent tomorrow, near 40 percent Friday, and 20-30 percent over the weekend. Heat levels slowly rise, with highs in the 87-90 degree range by Saturday and Sunday.

NEXT WEEK: For now it looks like most of the week will feature fairly routine late summer weather, with partly sunny days and “scattered, mostly afternoon and evening showers and thunderstorms. Highs through the week will be mostly in the upper 80s… See the daily Weather Briefing video for maps, graphics, and more details. 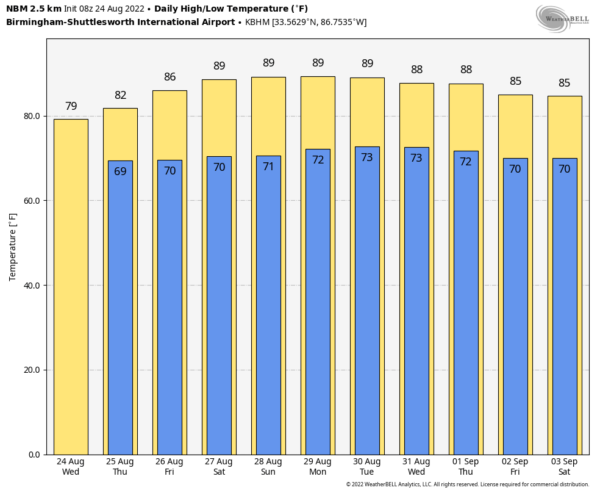 TROPICS: NHC is monitoring two tropical waves this morning. One is several hundred miles east-southeast of the Windward Islands. Environmental conditions could become more conducive for slow development of this system in several days while it is forecast to move across the Windward Islands and into the southeastern Caribbean Sea.

The other one is is forecast to move off the west coast of Africa in a day or two. Environmental conditions could support some slow development of this system late this week or over the weekend while it moves westward at 10 to 15 mph.

For now NHC gives both waves only a 20 percent chance of development over the next five days, and the rest of the Atlantic basin is quiet. 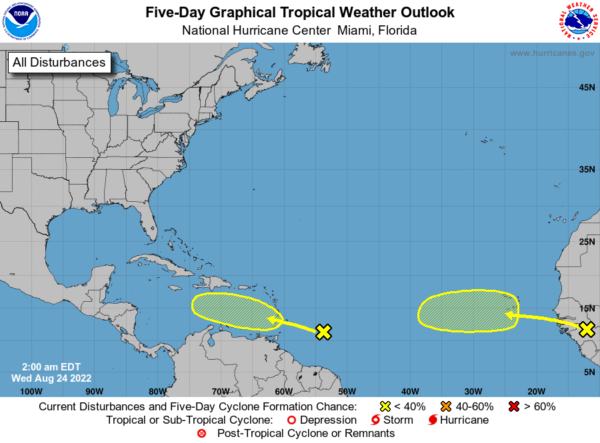 FOOTBALL WEATHER: For the high school games Friday night, a few scattered showers are possible, mostly during the first half of the games. Temperatures will be near 83 at kickoff, falling into the upper 70s during the second half.

Saturday, Jacksonville State will take on Stephen F. Austin at Cramton Bowl in Montgomery (2:30p CT kickoff on ESPN)… the sky will be partly to mostly sunny with only an outside risk of a shower or storm during the game. Kickoff temperature near 89, falling back into the mid 80s by the final whistle.

ON THIS DATE IN 1992: Andrew made landfall in southern Florida as a category five hurricane at 4:30 a.m. The high winds caused catastrophic damage in Florida, with Miami-Dade County cities of Florida City, Homestead, and Cutler Ridge receiving the brunt of the storm. About 63,000 homes were destroyed, and over 101,000 others were damaged. This storm left roughly 175,000 people homeless. As many as 1.4 million people were left without electricity at the height of the storm. The total death toll in Florida was 44.

Andrew is one of only four hurricanes to make landfall on the U.S. coast at category five strength; the others were the Labor Day hurricane of 1935, Camille in 1969, and Michael in 2018.