RADAR CHECK: Large areas of rain are pushing into West Alabama early this morning, and an unsettled pattern will continue across the state today with a mostly cloudy sky along with periods of rain. Some thunder is possible, but no severe storms are expected, and temperatures will hold in the 70s across much of the state today due to the clouds and rain. The average high for Birmingham on August 22 is 90.

We aren’t expecting too much change tomorrow through Thursday… the sky will be occasionally cloudy with scattered to numerous showers and thunderstorms around each day. Average rain amounts between now and Thursday will be in the 2-3 inch rain for much of the state, with higher totals possible across some of the western counties. Amounts of 1-2 inches are expected over the Tennessee Valley of far North Alabama, and the southeast counties of the state. 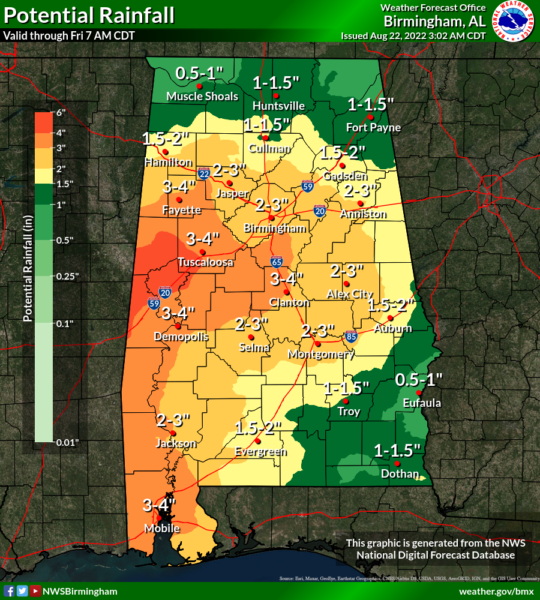 FRIDAY AND THE WEEKEND: The weather begins to trend drier by Friday and the weekend as an upper high slowly builds. Showers and storms become more scattered in nature, and we should see increasing amounts of sun. Highs will be generally in the upper 80s, slightly below average for late August. The chance of any one spot getting wet on these three days is 30-40 percent, and most of the scattered showers will come from noon to midnight.

NEXT WEEK: For now we are expecting fairly routine late summer weather next week, with partly sunny days and the chance of a few scattered showers and storms each day, mostly during the afternoon and evening hours. Highs will remain in the upper 80s most days… See the daily Weather Briefing video for maps, graphics, and more details. 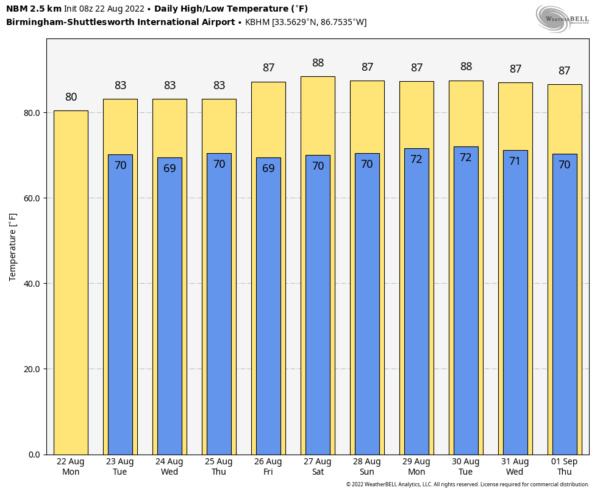 TROPICS: A weak tropical wave located a few hundred miles west of the Cabo Verde Islands continues to produce disorganized showers and thunderstorms. Environmental conditions could support some slow development of this system while it moves westward to west-northwestward at around 10 to 15 mph across the tropical Atlantic during the next several days. The chance of development over the next five days is only 20 percent, and the rest of the Atlantic basin remains very quiet. 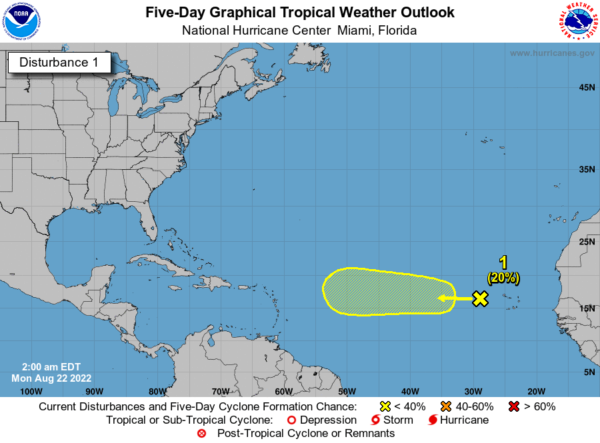 ON THIS DATE IN 1994: Hurricane John, about 345 miles south of Hilo, Hawaii had winds of 175 mph and pressure at 920 millibars or 27.17 inches of mercury, making it one of the strongest hurricanes ever in the Central Pacific. The 31-day existence made John the longest-lasting tropical cyclone recorded in both the Pacific Ocean and worldwide, surpassing both Hurricane Tina’s previous record in the Pacific of 24 days in the 1992 season and the 1899 San Ciriaco hurricane’s previous world record of 28 days in the 1899 Atlantic season.

ON THIS DATE IN 2021: Henri mad landfall at Westerly, Rhode Island as a tropical storm, making it the second tropical cyclone to make landfall in the U.S. state of Rhode Island during the season, seven weeks after Elsa.