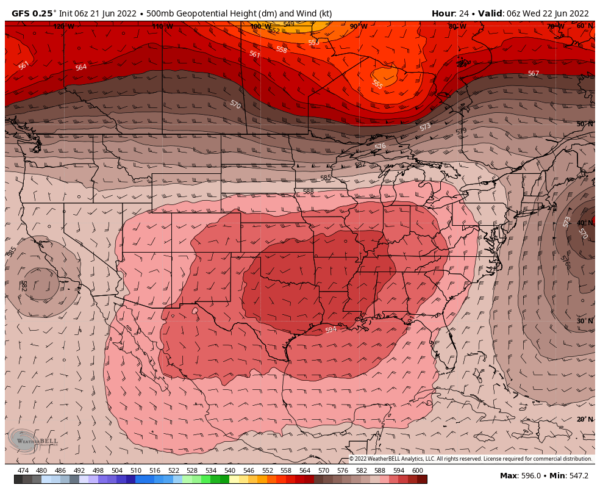 Today will be a hot day across Central Alabama as the heat dome of high pressure sits over a good portion of the southeast and south-central parts of the country, and it will not be leaving anytime soon. Skies will be sunny and highs reaching the mid to upper 90s across the area.

Same story on Wednesday, just a little hotter for some locations. Plenty of sun, with highs in the upper 90s to the lower 100s.

No relief from the heat on Thursday. Sunny skies with highs in the upper 90s to the lower 100s.

Very similar on Friday as skies will be sunny and highs in the mid 90s to the lower 100s.

The high weakens a little over the southeast on Saturday, which will allow for those afternoon highs to cool off just a little. Skies will remain sunny, with highs in the mid to upper 90s.

Moisture levels will be increasing on Sunday, and with a weak front approaching from the northwest, we could see a few isolated showers or storms. Highs will be in the mid to upper 90s underneath mostly sunny skies.

And at the end of the forecast period on Monday, that front pushes into the northern half of the area, that will continue the small chance of a few isolated showers and storms. Highs will range from the lower 90s to the upper 90s. 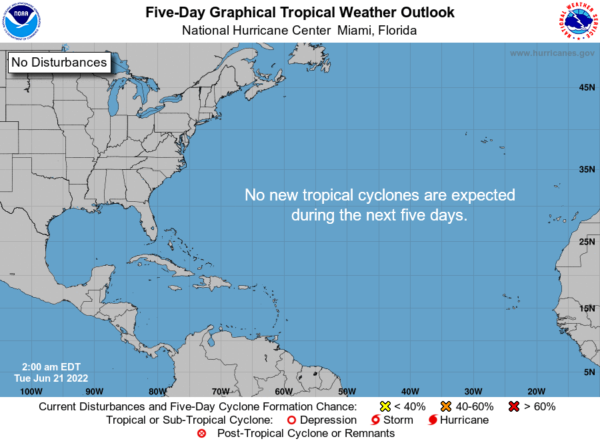 And taking a look at the tropics… Tropical cyclone formation is not expected during the next five days in the North Atlantic, the Caribbean Sea, or the Gulf of Mexico.