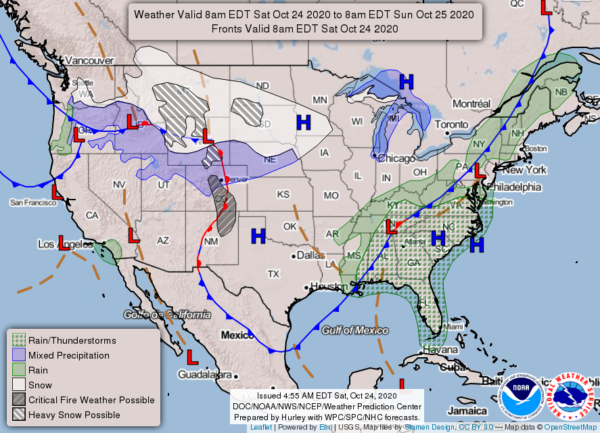 COLD FRONT MOVES THROUGH WITH STORMS TO START THE WEEKEND

SATURDAY: We’ll continue to have a cold front move through Central Alabama through the daylight hours that will bring showers and thunderstorms along and out ahead of the front. The front will be out of the area by tonight but showers may not end for the southeastern portions of the area until around midnight or so. We could see a few strong storms with gusty winds and small hail, but severe weather is not expected (non-zero threat). Highs will range from the upper 60s in the northwest to the lower 80s in the southeast.

SUNDAY: While it will be a dry day across the area on Sunday, we will have a good bit of clouds blocking out a good bit of the sunshine to end the weekend. Afternoon highs will be in the mid-70s to the lower 80s from northwest to southeast.

MONDAY: The start to the workweek will be dry and warm across Central Alabama with a good bit of sunshine, but another system associated with a cold front will be approaching from the west. Highs will be in the upper 70s to the mid-80s.

TUESDAY: The cold front makes it into Central Alabama by Tuesday morning and that will bring a chance of a few scattered showers and thunderstorms throughout the entire day. Afternoon highs will be in the mid-70s to the mid-80s.

WEDNESDAY: We start to see some moisture associated with a potential tropical depression moving into the southern half of the area on Wednesday which will bring increased rain chances into the area for a little bit. This model run does not have the system making it to a tropical storm, but we’ll be watching it. Highs will be in the lower 70s to the lower 80s.

THURSDAY: The GFS has the tropical low moving through the northern parts of the area during the day on Thursday that will keep us wet at times throughout the daylight hours, but most of the activity will be out of here by the late-night hours. The heaviest rainfall looks to occur over the extreme northern parts of Central Alabama and all of North Alabama where projected totals are showing 2 to 3 inches of rain. If this pans out, we may have to watch for localized flash flooding issues. Since this is tropical in nature, this will probably change throughout the next few days, so stay tuned. Highs will be in the 70s.

FRIDAY: A cold front helped to push the tropical moisture out of the area before the start of the day and it will bring cooler temperatures to Central Alabama to end the workweek. We look to have plenty of sunshine with highs reaching the mid-60s to the mid-70s across the area. 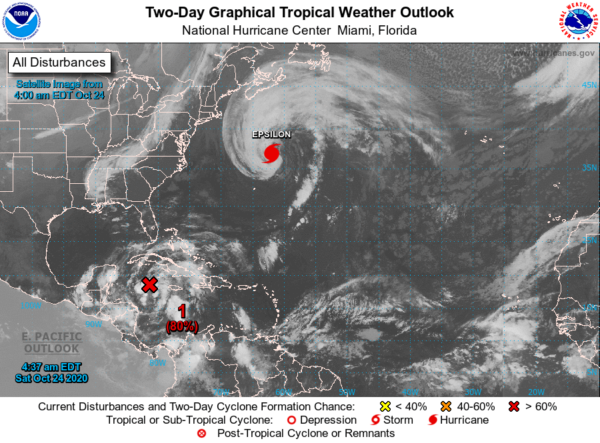 INVEST 95L: We are seeing an increase in organization over the Caribbean Sea just south of the Grand Cayman Island and the environment will remain favorable for further development. We may have a tropical depression form within the next 24-48 hours while the system drifts northward to northwestward. For now, the NHC has it moving into the southern Gulf of Mexico by the beginning of the workweek. The latest ensemble guidance shows that most of the members have the system moving across the Gulf of Mexico and potentially making landfall somewhere on the northern Gulf Coast within the next 5 days. Intensity guidance shows us that most members keep it as a tropical storm. It will be named Zeta if it does make it to tropical storm strength. We’ll have a much better idea once it gets better organized, so stay tuned.

HURRICANE EPSILON: As of 4:00 am, Epsilon continues to move farther out to sea and away from any land. The center was located around 355 miles to the north-northeast of Bermuda and was moving to the north-northeast at 12 MPH. The maximum sustained winds were at 75 MPH. It will experience gradual weakening over the weekend and will become post-tropical possibly by Sunday afternoon.

2005 – Hurricane Wilma reached the U.S. coastline near Everglades City in Florida with maximum sustained winds near 120 mph. The hurricane accelerated across south Florida and the Miami/Fort Lauderdale area, exiting the coast later the same day. There were 10 fatalities in Florida, and nearly 6 million people lost power, the most widespread power outage in Florida history. Preliminary estimates of insured losses in Florida were over $6 billion, while uninsured losses were over $12 billion.

ADVERTISE ON THE BLOG!

We had another fantastic year in 2019 with just over 17 million page views! That brings our total for the last two years close to 37 million page views! At this point, we are already close to eclipsing the 2019 total. Don’t miss out! We can customize a creative, flexible, and affordable package that will suit your organization’s needs. Contact Bill Murray at (205) 687-0782.

Get the Alabama Wx Weather Blog’s Seven-Day Forecast delivered directly to your inbox by email twice daily. It is the most detailed weather forecast available in Central Alabama. Subscribe here… It’s free!

CONNECT WITH THE BLOG ON SOCIAL MEDIA

There are several ways to watch or listen to the podcast that is all about the weather. Watch live starting at 8:00 pm CT on Monday nights at live.bigbrainsmedia.com, James Spann’s Youtube Channel, or on one of ABC 3340’s digital weather channels (17.2, 40.2, 68.3). Listen to the recorded audio podcast at WeatherBrains.com or on your favorite podcast platform (Apple Podcasts, Stitcher, Spotify, etc.), or watch the recorded video on James Spann’s Youtube channel.