It will be another hot day across Central Alabama, as we’ll have partly cloudy to mostly sunny skies. A few isolated to scattered storms may be possible in the eastern third of the area late this afternoon and into the early evening, but that will be based on if any outflow from storms off to the east make it into the area. Highs will be in the mid 90s to the lower 100s.

A Heat Advisory has been issued for the southeastern corner of the area until 9 pm tonight, as higher humidity and hot temperatures will lead to heat index values around 105º.

An easterly flow will set up over the area on Saturday that will allow for more moisture to push into the area, along with slightly cooler temperatures. Skies will be partly to mostly sunny, and the eastern half of the area will have a good chance of scattered storms during the afternoon and early evening. The western half will have a smaller chance for those storms. Highs will be in the lower 90s in the east to the mid to upper 90s in the west.

An approaching front will stop the progress of the westward moving trough on Sunday that will keep the chance of isolated to scattered afternoon showers and storms in the forecast, mainly for the western half of the area. Highs will be in the upper 80s to the mid 90s.

The front slows down and will make it into the northern parts of the area on Monday. Scattered storms will be possible across the area, with the higher chances closer to the front. Highs will be in the mid 80s to the mid 90s.

The front makes it deeper into the area on Tuesday, keeping scattered storms possible mostly during the afternoon to early evening hours. Highs will be in the mid 80s to the lower 90s.

And at the end of the forecast period on Thursday, moisture continues to hang around and will keep scattered storms possible across the area. Highs will be in the upper 80s to the mid 90s. 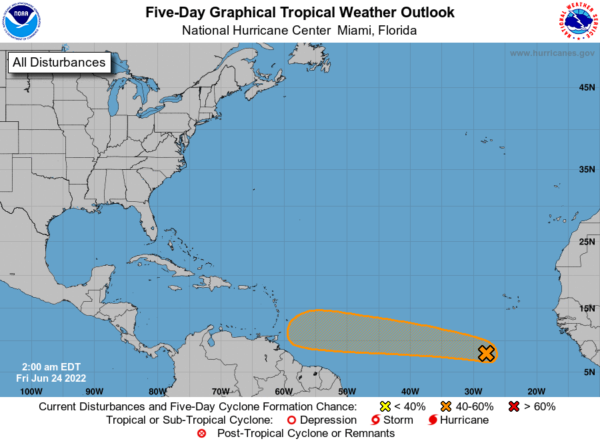 And taking a look at the tropics… We have a tropical wave moving westward across the far eastern Atlantic that could become a depression by early next week. It has a 50% chance of formation within the next five days. Guidance models show it will stay on a westward course through that time period and approaching the Windward and Leeward Islands. Too early to know where it goes after that. Most likely, this will become Tropical Storm Bonnie, but will it become a hurricane. We’ll have to watch and see.