We have an easterly flow set up over the area that will allow for moisture to be pulled in from the east. Skies will be partly to mostly sunny and well have a good chance of scattered showers and storms during the afternoon and into the evening. Highs will be in the upper 80s to the upper 90s from east to west. 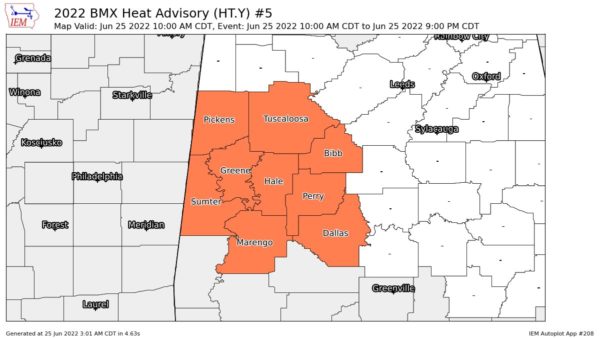 A Heat Advisory has been issued for the southwestern parts of the area until 9 pm tonight, as higher humidity and hot temperatures will lead to heat index values around 105º.

We’ll keep scattered afternoon showers and storms in the forecast on Sunday, but chances will be a little lower. Afternoon highs will be lower as well, reaching the upper 80s to the lower 90s.

A cold front slowly moves into the northern parts of the area on Monday that will bring an increased risk of scattered showers and storms. Highs will range from the lower 80s to the mid 90s.

The front washes out over Central Alabama on Tuesday that will keep our weather active. We’ll have scattered showers and storms, with highs reaching the mid 80s to the mid 90s.

Scattered showers and storms will remain possible on Wednesday, mainly during the afternoon and evening hours. Highs will be in the mid 80s to the lower 90s.

Same story on Thursday… Scattered showers and storms will once again be possible. Highs in the upper 80s to the lower 90s.

And at the end of the forecast period on Friday, we’ll continue with the higher scattered shower and storm chances. Highs in the upper 80s to the lower 90s. 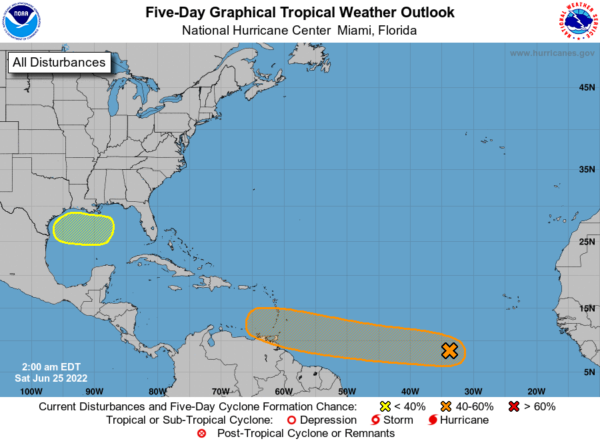 We have a tropical wave moving westward across the far eastern Atlantic that could become a depression by early next week. It has a 60% chance of formation within the next five days. Most likely, this will become Tropical Storm Bonnie, but will it become a hurricane? We’ll have to watch and see.

We also will have to watch an area just off of the Texas and Louisiana coasts as a low may develop and try to develop. This disturbance is expected to drift westward, but is only given a 20% chance for development over the next five days.