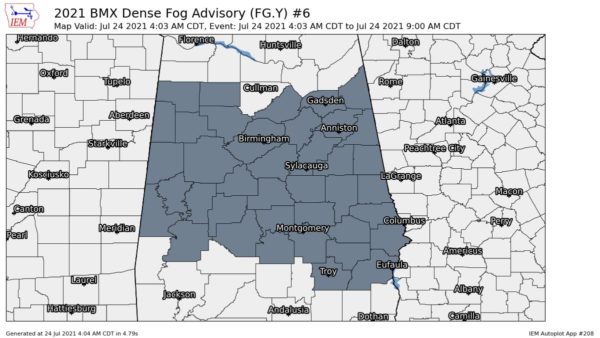 We are starting off this morning with mainly clear skies across Central Alabama, but down at the surface, we do have some areas of fog that is limiting visibility, especially in the locations that received rain on Friday. A Dense Fog Advisory is in effect for all of Central Alabama until 9 am this morning.

Temperatures across the area as of the 5 am roundup were in the lower to mid 70s. Troy was the warm spot at 76 degrees, while Talladega and Gadsden were the cool spots at 70 degrees. Birmingham was at 74 degrees.

THIS WEEKEND: The one thing that you will notice is that there is much less coverage of afternoon showers and storms in this forecast period, which is a good thing, as we all need to dry out just a little. The bad news is that each day will be hot and humid, and the forecast is nearly the same for each day.

This weekend will feature mostly sunny skies with very little wind at all. Humidity levels will be high enough that heat indices could reach and exceed 100 degrees. We’ll have a small chance of a few widely scattered afternoon showers and storms on both days, with highs reaching the upper 80s to the lower 90s on Saturday, and into the upper 80s to the mid 90s on Sunday.

The GFS is showing the afternoon shower and storm activity to be pretty scarce on Thursday and Friday across the area, but we can’t rule out a few isolated showers and storms. It will be hotter, with temperatures in the lower to mid 90s on both days. 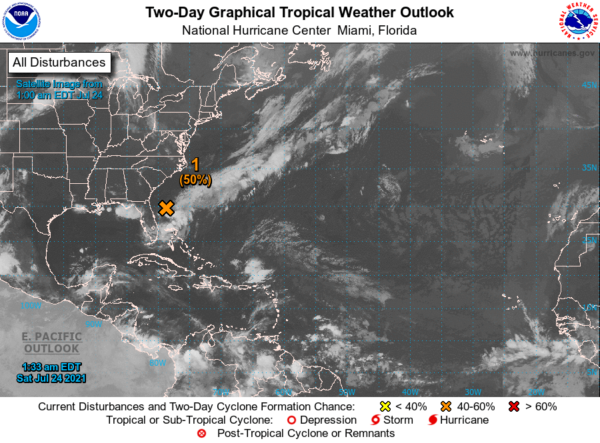 THE TROPICS: As of the 1 am update from the National Hurricane Center, we have an ill-defined low that is sitting off of the coast of Daytona Beach that is lacking in the shower and thunderstorm activity. We do believe that it will start to get its act together as conditions become more favorable, and a depression may form before the end of the weekend. Models are all over the board on which way this system will move, but once it becomes better organized, we can get a better idea on what it will do. If it becomes a tropical storm, it will be called Fred.