Today will be an overall nice day across Central Alabama with lower humidity values, but it will still remain very warm. Skies will be mostly sunny to partly cloudy, and there is a small chance of a few showers for locations along and south of I-85. Highs will be in the mid to upper 80s.

Sunday will be another mostly sunny, dry, and very warm day across the area. The GFS is trying to hint at some afternoon shower activity, but I’m sticking with a dry solution. Highs will be in the mid 80s to the lower 90s.

The heat starts to build back in on Monday as we’ll have mostly sunny skies across the area. There is a small chance of a few afternoon showers and storms for portions of North Alabama with a boundary stretching down from the Great Lakes, but all of Central Alabama should remain dry. Highs in the upper 80s to the lower 90s.

Showers and storms will remain possible for North Alabama above the Tennessee River on Tuesday with that stalled boundary; however, Central Alabama will remain dry with mostly sunny skies. Highs in the upper 80s to the mid 90s.

Wednesday, those shower chances begin to diminish for North Alabama, while Central Alabama remains dry with mostly sunny skies. Highs in the lower to mid 90s.

The tail end of that surface boundary looks to finally move into Central Alabama on Thursday, that will bring a small chance of a few isolated afternoon showers and storms. Highs will be in the upper 80s to the mid 90s.

A surface low will be approaching from the west on Friday that will bring another chance of scattered showers and storms late in the day, especially during the evening and late night hours. Highs will be in the upper 80s to the mid 90s. 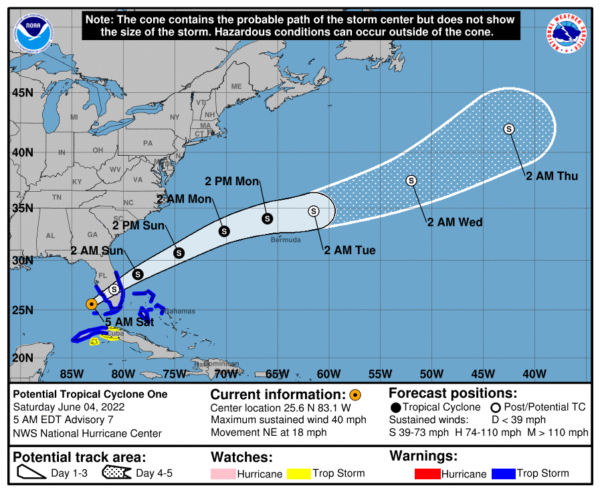 Taking a look at the 4 am update on Potential Tropical Cyclone One, we see that it remains unorganized enough to keep it from being classified as Tropical Storm Alex. Heavy rains continue to fall over southern Florida and will move over the Bahamas this afternoon. PTC-1 is expected to become Alex after the center moves back out over open water and will move away from the US mainland. Tropical storm warnings remain for the southern half of the Florida Peninsula, the Florida Keys, portions of the Bahamas, and the western half of Cuba.