TODAY AND FRIDAY: A few locations will get a little relief from the oppressive heat today as we’ll have a weak surface boundary move through the area. A few isolated showers and storms will be possible for the southern half, while the northern half will remain dry with drier air moving in. Highs will be in the mid 90s to the lower 100s across the area under mostly sunny skies.

With slightly drier air in place, heat index values will stay below 100 on Friday with sunny skies. An isolated shower or two may be possible in the extreme southeastern portions of the area south of I-85, but that will be based on if any outflow from storms off to the east make it into the area. Highs will be in the lower 90s to the lower 100s.

THE CENTRAL ALABAMA WEEKEND: A trough will be moving in our direction from the east on Saturday that will bring a slight increase in our shower and thunderstorm chances during the afternoon hours, mainly for the eastern half of the area. Skies will be mostly sunny, with highs ranging from the upper 80s in the east to the upper 90s in the west.

An approaching front will stop the progress of the westward moving trough on Sunday that will keep the chance of isolated to scattered afternoon showers and storms in the forecast, mainly for the western half of the area. Highs will be in the lower to mid 90s for most locations.

THE FIRST HALF OF NEXT WEEK: The front slows down and will be struggling to make it into the northern parts of the area on Monday. For those who want some rain, this will most likely be the day with the highest chances. We’ll have a 50/50 shot for scattered showers and storms, and highs will be in the upper 80s to the mid 90s.

The front makes it halfway through the area on Tuesday, keeping isolated to scattered showers possible mostly during the afternoon to early evening hours. Highs will be in the upper 80s to the mid 90s.

And at the end of the forecast period on Wednesday, the front makes it to the Gulf Coast, but we’ll keep a chance of isolated to scattered showers and storms in the forecast for Central Alabama. Highs will be in the upper 80s to the mid 90s. 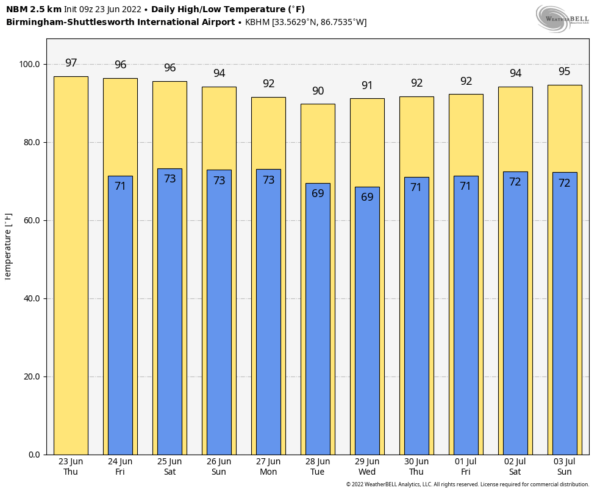 NO HEAT ADVISORIES FOR A WHILE: It looks like we may be done with the 100s for a while, as the National Blend of Models show our highs only getting back up to the mid 90s by the end of the run on July 3rd. 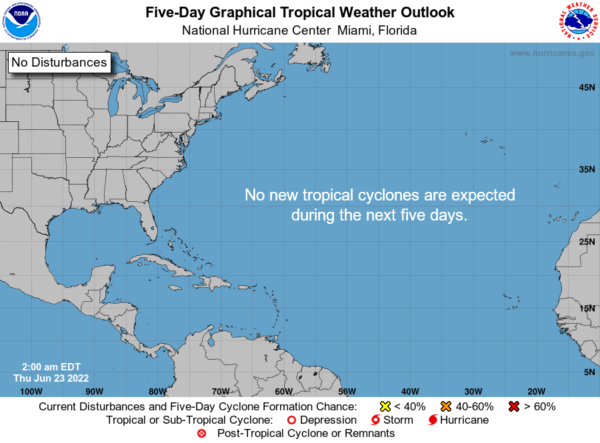 THE TROPICS: Tropical cyclone formation is not expected during the next five days in the North Atlantic, the Caribbean Sea, or the Gulf of Mexico.