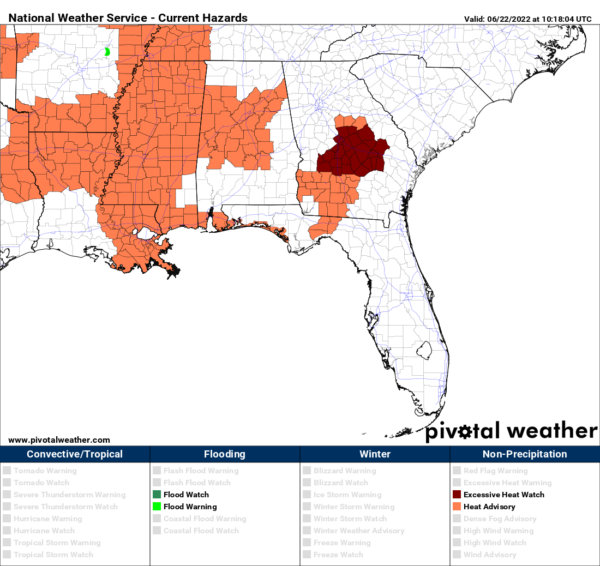 Today will be another scorcher across Central Alabama, with mostly sunny skies. The GFS is not showing it, but there is a very small chance for a few isolated, short-lived showers for the western half of the area later this afternoon, but only a temporary relief to the oppressive heat. A Heat Advisory is up for Autauga, Bibb, Blount, Calhoun, Cherokee, Chilton, Coosa, Dallas, Elmore, Etowah, Fayette, Greene, Hale, Jefferson, Lamar, Lowndes, Marengo, Marion, Montgomery, Perry, Pickens, Shelby, St. Clair, Sumter, Talladega, Tuscaloosa, Walker, and Winston counties until 6 pm tonight. Highs will be in the mid 90s to the lower 100s.

A weak front will move through the area on Thursday that will bring lower humidity values with it, but there will be no relief from the heat. Skies will be mostly sunny, with highs in the lower 90s to the lower 100s.

Friday only looks to be slightly different, as a weakness in the ridge and a trough to our east may allow for a few isolated showers and storms over the extreme southern and southeastern parts of the area by the late afternoon. The rest of us will be dry, with highs in the lower 90s to the lower 100s.

The start of the work week shows a front approaching the area on Monday that will bring a decent chance of showers and storms for those locations along and just south of the front, while the rest of the area will have a small chance of isolated showers and storms. Highs will be in the upper 80s to the mid 90s.

And at the end of the forecast period on Tuesday, the front will continue to struggle to move deeper into the area. We’ll keep a decent chance of scattered showers and storms in the forecast for the area. Highs will be in the upper 80s to the mid 90s.

And taking a look at the tropics… Tropical cyclone formation is not expected during the next five days in the North Atlantic, the Caribbean Sea, or the Gulf of Mexico.