Recorded at 2:00 am Saturday morning.

We’ll have some clouds in the sky on Saturday that will block out the sun at times, and don’t be surprised if one or two of those clouds squeeze out a few raindrops. Highs will be in the mid to upper 70s.

Sunday looks to be a little brighter day with everyone staying dry at this point. Other than some breezy conditions at times, the weather will be great. Highs will be in the mid to upper 70s.

THE WORK WEEK AHEAD

We’ll start off the work week on a dry note for Monday. It will be a day pretty similar to Sunday as it will be partly cloudy to mostly clear and breezy at times. Highs will be in the mid-70s to the lower 80s.

We’ll start to have some moisture move up into Central Alabama on Tuesday from Eta as it will be stationed just off the west coast of the Florida Peninsula. We could see some scattered showers in here through the daylight hours. Rain will become likely during the evening and late-night hours. Highs will be in the upper 70s to the lower 80s.

Wednesday will feature more clouds than sun with scattered showers and thunderstorms possible. At this point with the 00z GFS model run, much of the rain will stay over the far eastern parts of Central Alabama, while the European model shows a good bit of rain over all of the area. So, either way, showers and storms will be possible. Highs will be in the mid-70s to the lower 80s.

Once again, very different scenarios are being shown according to what long-range model you are looking at for Thursday and Friday. The GFS is showing mainly dry conditions on both days while the European keeps shower and thunderstorm chances in the forecast as it has Eta located just to the south of the northern Gulf Coast. It will all depend on exactly where Eta goes… and at this point, we will get a better idea once it gets better established over this weekend. Highs on both days will be in the lower 70s to the lower 80s. 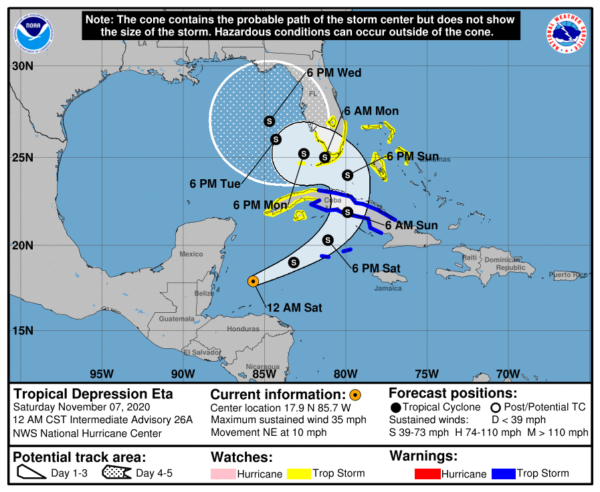 Speaking of Eta… as of the 12:00 am update from the National Hurricane Center, Eta is still a depression but is expected to gradually strengthen into a tropical storm at some point today. More strengthening is expected on Sunday. The movement was to the northeast around 10 MPH and is forecast to accelerate a little through Sunday morning, before curving to the north and northwest by Sunday afternoon. Tropical Storm Watches are up for the western tip of Cuba, for the coasts of South Florida and the Florida Keys, and for the northwestern Bahamas. Tropical Storm Warnings are up for The Cayman Islands and the eastern 2/3rds of Cuba. 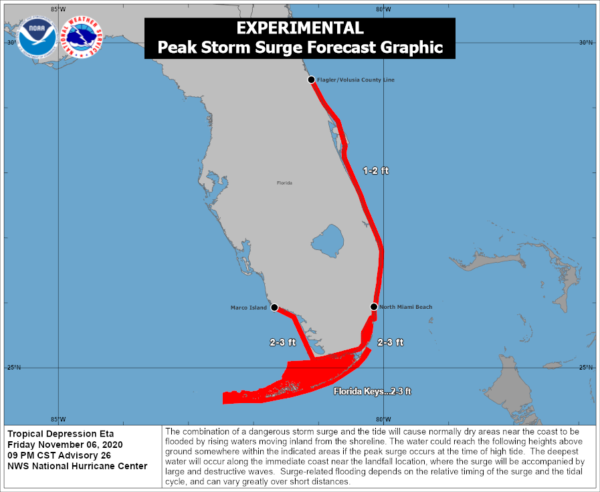 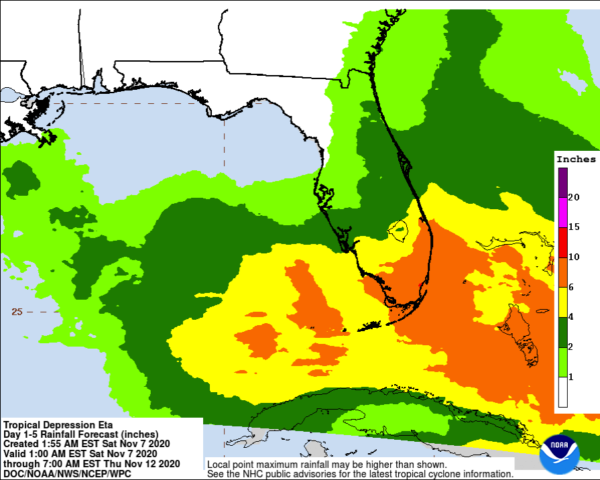 Heavy rainfall amounts of 5-10 inches are expected over South Florida and the Florida Keys with isolated maximum amounts potentially reaching 15 inches or more. 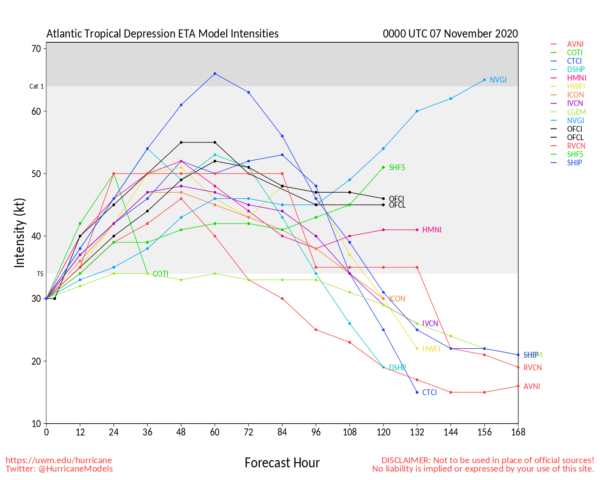 Where does Eta go after Wednesday… forecast ensembles are all over the board with eventual directions. Some circle it around into the Central Gulf of Mexico. Some having it getting a push to the northeast and crossing Northeast Florida. The good news is that the intensity guidance is keeping in the low to mid-range tropical storm before weakening back into a depression. We’ll get a better idea once Eta gets better organized over the weekend. We’ll have updates on the blog.

1940 – The Galloping Gertie bridge at Tacoma WA collapsed in strong winds resulting in a six million dollar loss, just four months after the grand opening of the new bridge. The winds caused the evenly sized spans of the bridge to begin to vibrate until the central one finally collapsed. From that point on bridges were constructed with spans of varying sizes.

ADVERTISE ON THE BLOG!

We had another fantastic year in 2019 with just over 17 million page views! That brings our total for the last two years close to 37 million page views! At this point, we are already close to eclipsing the 2019 total. Don’t miss out! We can customize a creative, flexible, and affordable package that will suit your organization’s needs. Contact Bill Murray at (205) 687-0782.

Get the Alabama Wx Weather Blog’s Seven-Day Forecast delivered directly to your inbox by email twice daily. It is the most detailed weather forecast available in Central Alabama. Subscribe here… It’s free!

CONNECT WITH THE BLOG ON SOCIAL MEDIA

There are several ways to watch or listen to the podcast that is all about the weather. Watch live starting at 8:00 pm CT on Monday nights at live.bigbrainsmedia.com, James Spann’s Youtube Channel, or on one of ABC 3340’s digital weather channels (17.2, 40.2, 68.3). Listen to the recorded audio podcast at WeatherBrains.com or on your favorite podcast platform (Apple Podcasts, Stitcher, Spotify, etc.), or watch the recorded video on James Spann’s Youtube channel.