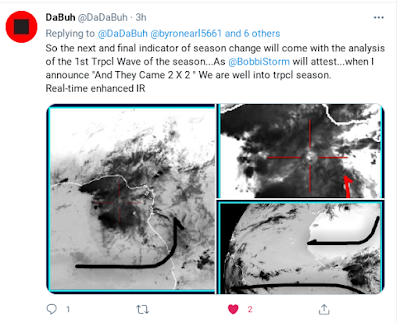 There used to be a room online for that…

(punctuation is so important…)

Yes we are watching the satellites.

Those too early, low latitude waves.

When they reach South America….

..and splash up on the mouth of the Amazon

We know the Wave Train is beginning.

Takes weeks, months before they are Prime Time.

But it’s a start…

I have a best friend who always reminds me she doesn’t believe in coincidences. I’ll add that one coincidence gets your attention, two coincidences really wake you up… trust me. One wave wandering westbound is interesting, two westbound waves is the start of a wave train that begins early, too low to do anything more than crash onto the coast of South America. Ironically, sometimes those early April waves are kick ass waves that look better than late May or early June but again they are too soon but it’s the beginning of the pattern switch. Dabuh knows that and he knows I know that so we be watching frequently!

Note the congregating of convection there now.

To the east is a wave near South America.

Too soon yet there it is!

Here’s a close up of our wave.

…we will remember you well!

All purple, dry and wait what’s that?

(There’s another wave candidate behind it too!)

Next wave leaves the coast.

Too early, too low,  too soon.

One wave at a time.