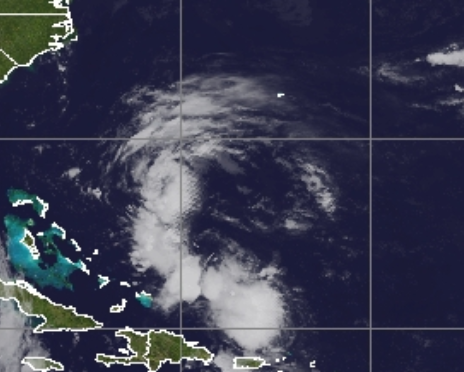 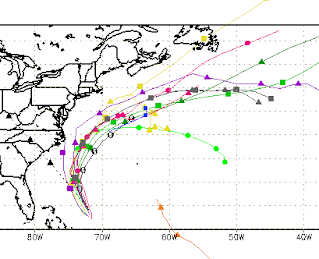 96L is our close in concern.

Intensity wise models keep this on the low side.

Most models keep it safely out at sea.

Being honest in that most models keep it far from the coastline and then curving out to sea. As a real center has not formed this is all based on modeling and I prefer seeing a center before I say this is not something to worry about. Models have been bad often this season when it comes to early track scenearios. An example being they had a system forming recently and becoming a strong storm and cruising up the East Atlantic and that recent wave never formed at all. Nicholas, as others before him, were supposed to go to Mexico or TexMex but did not. Once a center forms and the models run from that definitive information the real end game is more reliable. For now it’s something to watch and depending on what happens it will also kick up the surf so becareful at the beach.  Also note that IF it forms it could have an influence on the lead African wave, as you can see in the errant red track down near 60N in the above graphics, as one could follow the other playing follow the leader in the Atlantic.

Everyone loves to flirt with cute librarians and I was one for a long time. The real secret of being a librarian is when doing research you go wide, then you go narrow and if you don’t find what you want then you go wide again. Also smile back, but don’t flirt too much on the Reference Desk! This is the wide shot above and it shows you how far apart these two systems are and as some models show the African Wave being influenced by 96L (named after the African Wave) the real question is will it be influenced by it or will 95L follow it’s own path across the Atlantic? 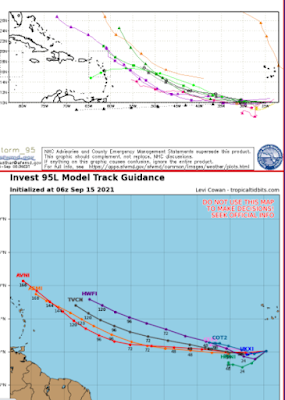 IF 96L stays weak it presents a weakness in the ridge that could allow 95L to be tugged more to the North as the models show below. Does it move fast up along the Atlantic? If so it could tug at it and then the ridge snaps back and 95L keeps moving along the Southern end of the modeling package or cone. The models are up above but again I remind you it has not formed a solid center and we are doing modeling forecasting vs “wow look at that Cat 3 Hurricane, do you think it will hit RI anytime soon??”  It’s good to have dreams but you gotta live in the real world also.  Anything coming across the Atlantic at that angle this time of year must be watched very carefully. There’s just too many unknowns down the tropical road.

So what do we know for sure? This should develop into a named Tropical Storm and CLIMO wise it is in a favorable area for development. Again that means hold onto your hurricane supplies (hope you didn’t use them for a Labor Day Picnic!!) and if you need to resupply them now in the relatively quiet time where we are chasing models and not tracking killer hurricanes. Late September is problematic and the first two weeks of October this year could look like that neighbor’s decorations for Halloween in their over decorated front yard.

Use this time wisely and keep watching the Invests and any new waves rolling off Africa or those rouge waves that slip under the radar and flare up close in. 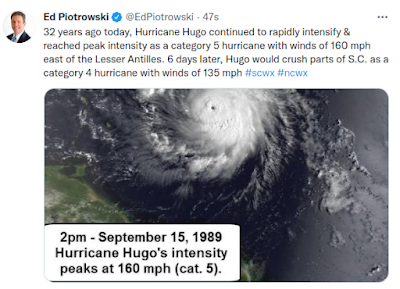 In case you need a reminder what a real Hurricane is…

I’m not speaking on Nicholas today, because it’s obvious what Nicholas is doing. He made landfall FAR to the right (EAST) of where most of the early moderling had him making landfall. He’s a wet, sloppy mess with lots of weather and adding to the already high level of rainfall that region of the country has had. Basically Nicholas is doing what Nicholas should be doing and there is no reason to hype it or create melodrama where it does not exist. The truth is THIS is what Hurricane Season is all about. Each storm has it’s own dangers and if your home is in it or in the path of a storm as Louisiana has been and quite frankly the East Coast has been it’s hard to sleep easy at night and not worry on the next big one that might be knocking at your door or flooding your home. Glad we have no Hugo staring us down on the SE or East Coast and really hoping the Gulf of Mexico gets a break; a good rest to dry out, clean up and try to put normal back together again.

I’ll be offline Thursday for Yom Kippur so consult all your favorite, reliable sources. Speaking of that neighbor 😉 Mike will be watching carefully as he prepares for Halloween later this month!  Aside from his awesome www.spaghettimodels.com page he does an fun and educational Facebook Live around 9:21 AM every morning going over models. And if you enjoy listening to Mike talk, as I have for years… check him out if you have not.  https://www.facebook.com/mikesweatherpage. I was one of Mike’s early fans, but now he has a whole nation of fans who enjoy his playful but pragmatic discussion on long range modeling while always looking for those close in, pop up surprise storms that we know so well in the tropics!

I’ll be back Friday and I’m pretty sure we will have Odette if not Peter, but which one is really Peter? That’s  my quesstion of the day.

Ps I do not have to remind you that Africa is Prime Time for producing strong tropical waves that often can develop into some of our worst hurricanes so never stop watching waves over Africa in September!