MILD WINTER DAY: A storm system is forming northwest of Alabama, and is set to bring lots of snow from northern Kansas to near Chicago over the next 36 hours, where winter storm warnings are in effect. But we will be in the warm sector of the system, and we project temperatures in the low 70s this afternoon, almost 20 degree above average for late January in Alabama. The sky will be mostly cloudy, and while much of the day will be dry a few scattered showers are possible.

A tightening pressure gradient will bring increasing winds to the state later today and tonight; south winds will gust as high as 25/30 mph at times. And, with the approach of a cold front, a few showers and thunderstorms are likely tonight. SPC has defined a low end, “marginal risk” (level 1/5) of severe thunderstorms for parts of West Tennessee, Arkansas, and North Mississippi. This clips the northwest corner of Alabama, but for most of our state severe storms are not expected tonight due to warm air aloft/poor lapse rates. 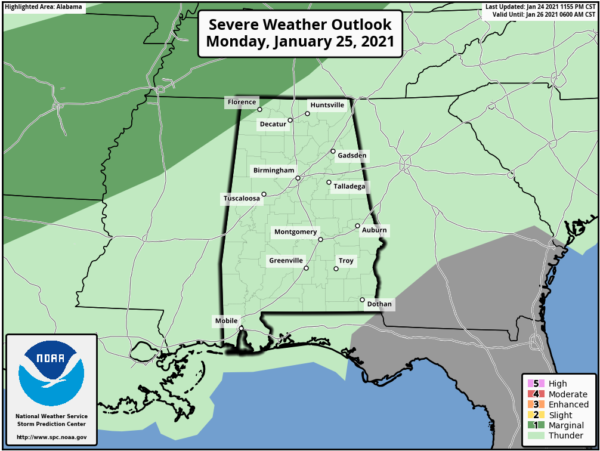 TOMORROW/WEDNESDAY: The front will stall out tomorrow somewhere around U.S. 80, so the chance of rain will continue over the southern half of the state… North Alabama will be dry with more clouds than sun. The high tomorrow will be in the 60s statewide. Then, a wave of low pressure forms on the front, and rain is likely statewide tomorrow night into at least part of the day Wednesday. The weather stays mild Wednesday with a high in the 60s; rain amounts between now and Wednesday will be in the 1-2 inch range.

REST OF THE WEEK: Thursday will be colder with a mostly sunny sky… the high will be in the 48-52 degree range. Then, we drop down into the 20s early Friday with a clear sky and light wind. Friday will also feature a good supply of sunshine with a high in the mid 50s.

THE ALABAMA WEEKEND: Saturday looks dry; the sky will be partly sunny with a high in the low 60s. The next weather system will bring rain to the state Saturday night into part of the day Sunday… for now it looks like the most widespread rain comes from about midnight Saturday night to noon Sunday. Sunday’s high will be in the upper 50s for most places.

NEXT WEEK: The weather looks dry Monday through Wednesday with seasonal temperatures… highs in the 50s and lows in the 30s. The next chance of rain comes later in the week, most likely Thursday or Thursday night. See the Weather Xtreme video for maps, graphics, and more details.

ON THIS DATE IN 1940: On the morning of January 25, 1940, the headlines on the Birmingham Age-Herald screamed that more cold was in store for the state. And it had already been very cold. Since an arctic cold wave invaded the state on the night of the 18th, overnight lows had been in the teens or single digits every morning except for the morning of the 23rd when the low was 24F. The average temperature of 21.3 for the seven day period ending January 25, 1940 still stands as the ninth coldest seven day period in Birmingham history.