The springtime weather roller-coaster continues on as we head out of a dry but cool weekend and towards the end of March and beginning of April. While March came in like a lamb, it may be going out like a lion, as the potential for severe storms exists on Wednesday. Let’s take it day by day.

The Mid-South remains in a “northwest flow” regime to start the week with wind aloft from the northwest, keeping temperatures from rising much of any above normal and bringing periodic high cloud cover. However, with high pressure shifting to the east of us, we should see temperatures warmer than Sunday on an easterly wind. Looks for highs in the mid 60s, perhaps some upper 60s with just enough sunshine. After a cool start near 40 degrees in the morning, Monday night’s conditions will be much milder with wind shifting to the southeast, keeping temps in the 50s overnight.

Tuesday is really a setup day for Wednesday. Though likely to remain dry, a storm system moving out of the southwestern U.S. into the southern Plains will bring much more cloud cover and southerly wind will become gusty (to 25 mph) as humidity rises to more typical levels for this time of year. Look for highs to respond to the south wind and reach the mid to upper 70s. Can’t rule out a stray shower, but it’s unlikely. South wind will remain fairly strong Tuesday night as the southern Plains system approaches and the low level jet stream increases, and that will keep it warm overnight with temperatures remaining in the 60s.

All eyes are on Wednesday this week as it is likely to be an active weather day across the lower to mid Mississippi Valley, potentially including the Mid-South. Very strong south wind will continue to feed moisture into the region as a cold front moves in from the west. Look for wind gusts throughout the day to reach 35-45 mph, perhaps even touching 50 mph! The Trash Can Meter indicates your waste receptacle will be over yonder and may even roll down in the holler! 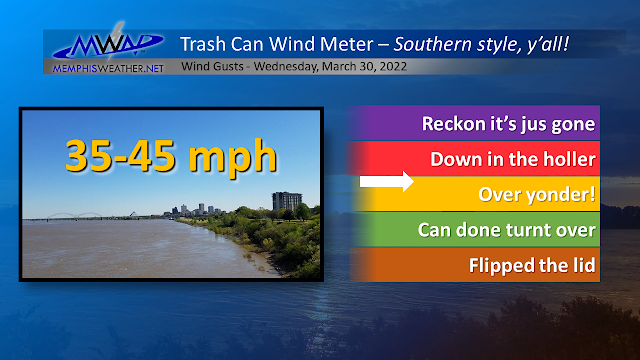 As of Sunday afternoon, it appears the ETA for stormy weather will be in the afternoon hours, most likely from around school dismissal time through rush hour, though that could easily still change by a couple of hours.

The Storm Prediction Center has been highlighting a potential severe weather outbreak for 3 days now, and as of today, indicates that is most likely to occur just to our south, though severe storms are entirely possible in the Mid-South as well.

While this is still 72 hours or so out, the most likely scenario appears to be a squall line with high wind over 60 mph, though it is possible that a few rogue storms could form ahead of the line. With wind screaming from the surface up, and plenty of shear, tornadoes are a distinct possibility as well.  They would be most likely in rogue cells that form, but also possibly embedded within a squall line. Areas just to our south are the most favored, but this scenario definitely bears watching.

The main limiting factor right now appears to be storm fuel, or instability. If we get some morning sunshine and temperatures approach 80 degrees ahead of the system, that higher risk zone could expand further north. Updates on our severe weather threat, as well as wall-to-wall coverage on Wednesday, will be provided on our social media feeds linked below.

The arrival of the cold front by early evening will bring an end to this round of severe weather and usher in cooler air Wednesday night on gusty west wind. as temperatures fall back into the 40s by Thursday morning.

It looks like seasonally cool and dry weather is on tap to end the week and start the month of April – no foolin’. Morning lows in the 40s and afternoon highs in the mid 60s with a cool breeze on Thursday in particular. 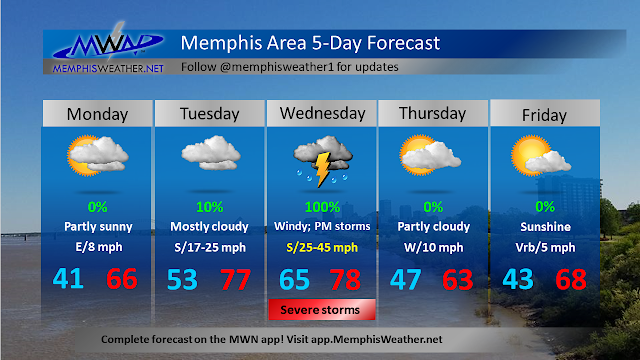 Next weekend and beyond – Overall cool

Computer models are not in good agreement on next weekend at this point, but hint at a possible system moving by to our south, which could throw some showers over us Saturday and maybe Sunday. It will remain cool with temperatures similar to the end of the week – highs in the mid 60s.  Overall, the start of April is forecast to be cooler than average (which is near 70 for highs and near 50 for lows). No additional major storm systems are on the horizon out to about 10 days after Wednesday.