COLD START: Here are some temperatures across Alabama just before daybreak….

Look for a cloudless sky across Alabama today with a high between 52 and 55 degrees… the average high for Birmingham on December 8 is 58. The rest of the week will be dry with sunny days, fair nights, and a warming trend. We reach the low 60s tomorrow, and by Thursday and Friday afternoon highs will be in the 65-70 degree range.

THE ALABAMA WEEKEND: A cold front will push a band of showers and thunderstorms into Alabama Saturday. For now severe storms are not expected due to very limited instability, marginal dynamic support, and weak lapse rates. It won’t rain all day, and amounts should be 1/2 inch or less for most of the state. Otherwise, Saturday will be a cloudy day with a high in the low to mid 60s. Then, on Sunday, we expect a breezy and colder day with gradual clearing… the high Sunday will be in the low 50s with a chilly north wind.

NEXT WEEK: We are cool and dry Monday and Tuesday; global models suggest a chance of rain at mid-week. But, here is considerable differences between the American model (the GFS) and the European (the ECMWF), and it remains to be seen if we have a threat of strong storms or really significant rain. See the Weather Xtreme video for maps, graphics, and more details.

FOOTBALL WEATHER: Saturday, Alabama will take on Arkansas in Fayetteville (11:00a CT kickoff)… the weather looks dry but cold. The sky will be mostly cloudy with temperatures holding in the low to mid 40s during the game. Then, Saturday evening, Auburn travels to Starkville to taken on Mississippi State (6:30p CT kickoff). While rain is likely during the day in East Mississippi, there is a good chance the rain will be over by game time. Temperatures will fall from near 55 at kickoff, into the 40s by the second half.

ON THIS DATE IN 2017: Significant snow fell across a large portion of Central Alabama. Within the main corridor of snow, totals of 4 to 8 inches were common, with a few swaths of 8 to 12 inches. A few reports exceeding 12 inches were received from Clay into Cleburne Counties: one 15 inch report in Delta (Clay Co.), and two 13 inch reports (Cleburne Co.). While public reports are considered unofficial, values were fairly consistent and tend to indicate this event was a top-tier ranking snowstorm for some locations in East Alabama. Birmingham officially recorded 4 inches of snow, making it the 3rd snowiest December on record. A few flakes were seen in far South Alabama as well; even Mobile and Baldwin counties had some snow. 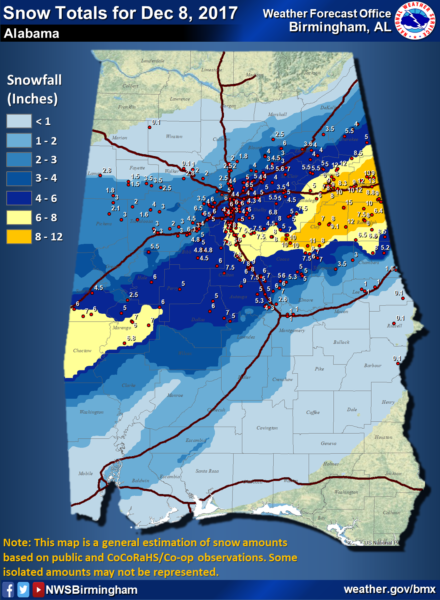