SUNNY WINTER AFTERNOON: Nothing but sunshine around here this afternoon; temperatures are mostly in the 40s over the northern counties of the state, with 50s to the south. Interesting to note how well the snow cover shows up on visible satellite imagery this afternoon over the northwest corner of Alabama. 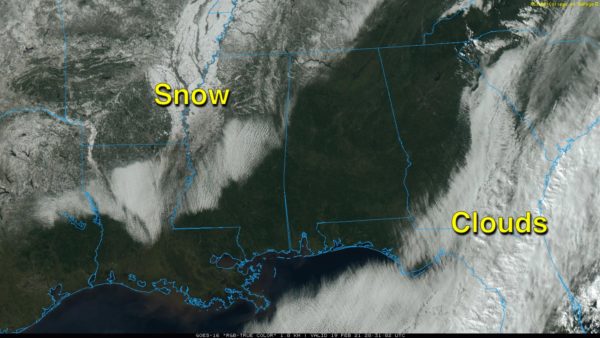 Tonight will be clear and cold with a low mostly in the 20s… upper teens are likely for the northwest counties with the lingering snow cover.

WARMER DAYS AHEAD: Tomorrow will be another sunny day with a high in the mid 50s… then we reach the mid 60s Sunday with a partly sunny sky as the warming trend continues. Clouds move in Sunday night, and showers will likely move into the state after midnight ahead of a Pacific cold front.

NEXT WEEK: Showers are likely Monday morning… otherwise the day will be mostly cloudy with a high in the 50s. Then, we will be dry Tuesday and Wednesday with a high in the 60s along with a good supply of sunshine. Some spots could touch 70 degrees Wednesday afternoon. Clouds increase Thursday, and some rain is likely late Thursday and Thursday night. No sign of any severe thunderstorms, winter storms, or really high impact weather events for Alabama over the next 7 to 10 days. See the Weather Xtreme video for maps, graphics, and more details.

ON THIS DATE IN 1884: The 1884 Enigma tornado outbreak is thought to be among the largest and most widespread tornado outbreaks in American history, striking on February 19–20, 1884.

The first tornadoes of the day touched down in Mississippi during the late morning, near Louisville and Columbus, passing into Alabama north of Carrollton. A deadly tornado touched down near Oxmoor at 1:20 p.m. This tornado roared northeast toward the new industrial town of Leeds, southeast of Birmingham. The tornado was deadliest there, killing thirteen people and sweeping away many homes.

About 2:30 p.m., what was likely an F4 tornado roared from the sky near Jacksonville in East Alabama. This would be the deadliest tornado of a very deadly day. Ten people were killed at Germania (now Piedmont). Fourteen people died at Goshen. The school at Goshen was “blown to atoms” killing the schoolmaster and injuring many of the children. The tornado killed thirty people along its thirty five mile path into Georgia. Georgia was especially hard hit. In fact, the day is still Georgia’s deadliest tornado disaster, with at least 69 fatalities from at least seventeen significant tornadoes.

The rampage would continue into the Carolinas during the late afternoon and evening hours. One of the deadliest tornadoes of the outbreak killed at least fifteen people around the community of Philadelphia, North Carolina.