WARM MAY DAYS: The sky is mostly sunny across Alabama this afternoon with a field of shallow cumulus clouds; showers are almost impossible to find on radar at mid-afternoon. Temperatures are in the upper 70s on the eastern side of the state… West Alabama is warmer with mid 80s. Tonight will be mostly fair with a low in the 60s.

For the weekend, we expect highs in the mid 80s tomorrow, and upper 80s Sunday as the warm pattern continues. The sky will be partly to mostly sunny both days, but a few widely scattered showers or storms could pop up in random places (nothing widespread). The chance of any one location seeing rain tomorrow is 30-40 percent, and 20-30 percent Sunday.

NEXT WEEK: The upper ridge will continue to keep the major rain producing systems well to the north and west of Alabama. Look for mostly sunny days, fair nights, and only isolated showers from time to time. Temperatures will likely reach the low 90s over the latter half of the week… See the Weather Xtreme video for maps, graphics, and more details. 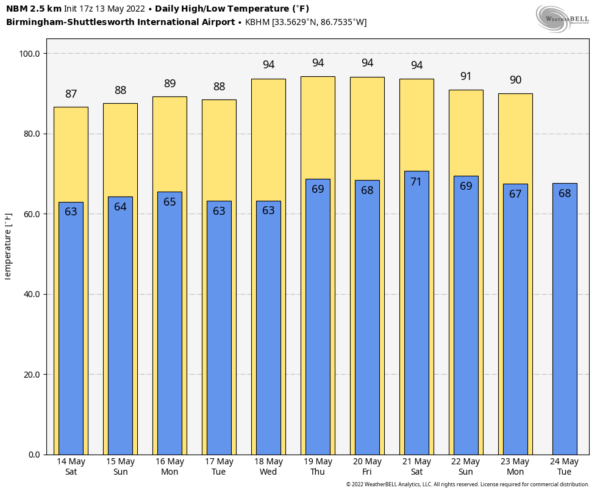 RAIN UPDATE: Conditions are getting dry across Alabama. Birmingham has measured only 0.01″ of rain since May 2; the total for the month is 0.35″ thanks to a decent shower we had back on the May 1 that brought a third of an inch of rain. The last “big” rain was April 16-17, when 3.20″ was measured on those two days.

LUNAR ECLIPSE SUNDAY NIGHT: A total lunar eclipse will occur Sunday night and it will be visible in eastern North America, including Alabama. Unlike a solar eclipse, no special viewing precautions are necessary. During totality between 10:29 and 11:54 p.m., the moon turns a dark orange or red, which is often referred to as a “blood moon.” As sunlight passes through our atmosphere, the green, blue and violet portion of the light spectrum is filtered out while yellow, orange and especially red bend around the earth and onto the moon’s surface giving it the reddish color.

ON THIS DATE IN 1980: An F3 tornado ripped directly through the center of Kalamazoo, Michigan, killing five people, injuring 79, leaving 1,200 homeless and causing $50 million in damage. The tornado passed directly over the American Bank, where a barograph reported a pressure drop of 0.59 inches.