MOSTLY DRY TODAY: We note a few small, isolated showers over the Tennessee Valley of far North Alabama early this morning; those should end very soon, and most of Alabama will be warm and dry again today with a partly sunny sky. The high today will be in the low 80s… the average high for Birmingham on April 29 is 78.

Highs will remain mostly in the low 80s over the weekend. Look for a mix of sun and clouds tomorrow with a few widely scattered showers around. The chance of any one spot seeing a shower tomorrow is 15-20 percent, so rain won’t be widespread. A weakening cold front will bring a general increase in showers and thunderstorms Sunday, but they will still be scattered in nature and it won’t rain everywhere. Odds of any one location seeing rain Sunday are 40-50 percent, with the higher odds over the northern third of the state. No “wash-out” at all, but if you have something planned outdoors just know a passing shower or storm is not out of the question Sunday.

NEXT WEEK: An upper ridge will stay in place, and will keep the main rain producing systems north and west of Alabama. There will be enough moisture for a few widely scattered showers each day, otherwise we expect partly sunny days, fair nights, and highs in the 80s. No chance of any severe storms around here for the next 7 days… it is a summer-like pattern with the ridge in place. See the Weather Xtreme video for maps, graphics, and more details. 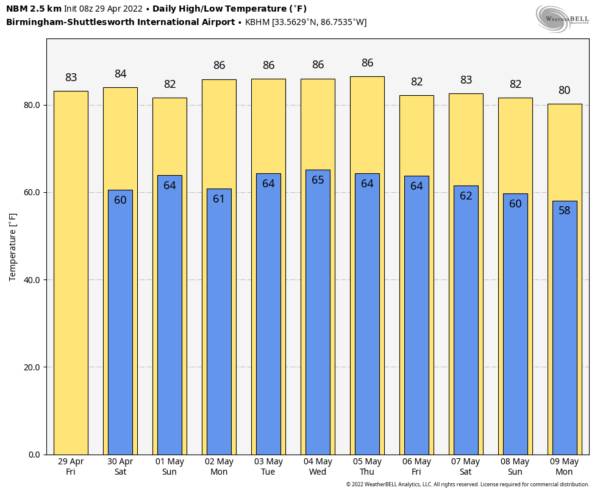 ON THIS DATE IN 1910: The temperature at Kansas City MO soared to 95 degrees to establish a record for April. Four days earlier the afternoon high in Kansas City was 44 degrees following a record cold morning low of 34 degrees.

ON THIS DATE IN 1991: Southeast Bangladesh was devastated by a tropical cyclone with sustained winds of approximately 155 mph during the late night hours. A 20-foot storm surge inundated the offshore islands south of Chittagong and pushed water from the Bay of Bengal inland for miles. Best estimated put the loss of life from this cyclone between 135,000 and 145,000 people.

ON THIS DATE IN 2014: An EF-1 tornado touched down in Sardis City (northern Etowah County) during the pre-dawn hours. The tornado was at its peak intensity along Mountainboro Road between Shady Grove Road and Lawson Gap Road, with maximum winds between 90 and 100 mph.