WARM, DRY WEATHER: Temperatures are mostly in the 70s across Alabama this afternoon with a partly to mostly sunny sky… the average high for Birmingham on March 11 is 65. Tonight will be mostly fair with a low in the 50s.

TOMORROW AND THE WEEKEND: The weather won’t change much thanks to a strong upper high over the Gulf of Mexico. Partly sunny, warm days and mostly fair nights will continue with highs between 78 and 82 degrees for most places. An isolated shower or two is possible near the Tennessee state line, but most Alabama communities will stay rain-free.

To the west, a major storm system will bring heavy snow to parts of Colorado, Wyoming, and Nebraska over the weekend, with potential for severe thunderstorms in the warm sector over parts of Kansas, Oklahoma, Texas, Arkansas, and Louisiana.

NEXT WEEK: Rain and thunderstorms will move into Alabama Monday. A few strong thunderstorms are possible as some surface based instability, but wind fields will be weakening and for now the threat of severe storms looks rather low. Another round of rain and thunderstorms is likely Wednesday and Wednesday night, followed by drier air for the end of the week. Highs will be in the 70s Monday through Wednesday, with 60s Thursday and Friday. See the Weather Xtreme video for maps, graphics, and more details. 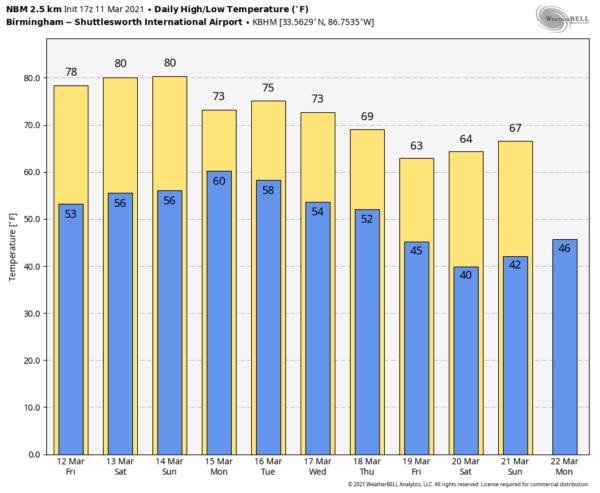 ON THIS DATE IN 1888: The Great Blizzard of 1888 paralyzed the east coast from the Chesapeake Bay to Maine on March 11 through the 14th. The blizzard dumped as much as 55 inches of snow in some areas, and snowdrifts of 30 to 40 feet were reported. An estimated 400 people died from this blizzard.

ON THIS DATE IN 1963: A series of tornadoes moved across North Alabama, including an F4 in Cullman County that killed two people. Twenty homes and 20 farm buildings were demolished and at least 120 homes and several other structures were damaged. Some of the hardest areas included Phelan, Berlin, Fairview, and Holly Pond. An F2 tornado moved through parts of Limestone and Madison counties, killing one person.