FOGGY START: There is a dense fog advisory for about the northern third of Alabama early this morning… the fog will dissipate by mid-morning. Otherwise, today will be warm and very humid with a mix of sun and clouds. A few scattered showers will form this afternoon, but the rain won’t be as widespread as recent days. Chance of any one spot seeing a shower later today is 20-30 percent, and the high will be in the 85-88 degree range. The average high for Birmingham on September 6 is 88.

The weather won’t change much tomorrow and Thursday… partly sunny, warm, humid days with a few widely scattered showers or storms around, mostly during the afternoon and evening hours. Highs remain in the mid to upper 80s.

FRIDAY AND THE WEEKEND: Moisture levels rise, and showers and storms become more widespread Friday. The rain could be heavy at times, and some flooding issues can’t be ruled out with the saturated soil conditions. Then, for the weekend, the weather remains unsettled with scattered to numerous showers and thunderstorms both days. Not a washout, and you will see some sun at times, but occasional showers are likely. Highs will drop into the 78-82 degree range due to clouds and showers.

NEXT WEEK: Showers remain a good possibility Monday, but we are seeing evidence that drier, continental air could push into the Deep South by the middle of the week with lower humidity and cooler nights. See the daily Weather Briefing video for maps, graphics, and more details. 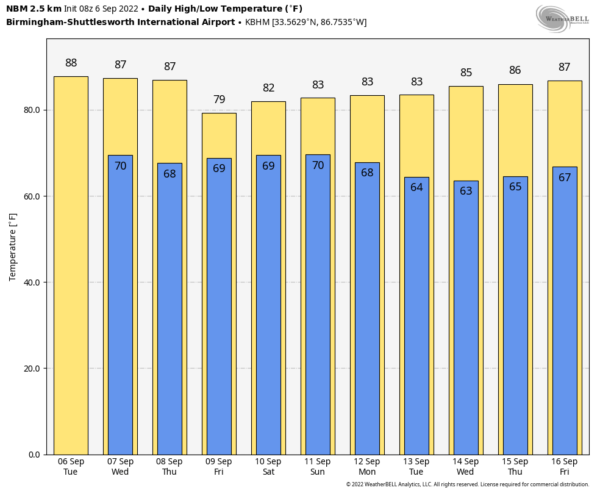 TROPICS: Danielle is barely a hurricane in the North Atlantic with winds of 75 mph. It will move east/northeast over the next few days, and will become post-tropical by Thursday night… it will remain far from land. TropicaL Storm Earl is packing winds of 65 mph well north of Puerto Rico. It is expected to become a hurricane tonight, passing just east of Bermuda Thursday night. From there is moves into the North Atlantic, far from land.

A tropical wave is in the eastern Atlantic; it has a 60 percent chance of becoming a tropical depression or storm over the next five days, but it turn northward and is no threat to land. No tropical systems will be close to the U.S. for at least the next 7-10 days. 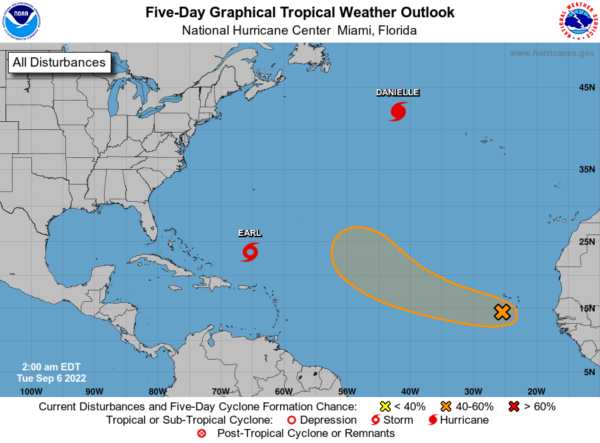 RAIN UPDATE: Here are rain totals for the year so far, and the departure from average…

ON THIS DATE IN 1933: The remnant low of the Treasure Coast Hurricane dumped 10.33″ of rain in Charleston, which is the second-highest 24-hour rainfall total on record for the downtown station. The storm produced wind gusts of 51 mph and also spawned a tornado near the city.