QUIET DAYS: A strong upper high will continue to shunt most of the active rain producing systems and north of Alabama for the next 7 to 10 days, meaning a quiet, and most dry pattern for the Deep South. With sunshine in full force today, we project a high in the mid 80s for most places this afternoon. The average high for Birmingham on May 10 is 81.

A weak disturbance could bring an isolated shower to the northern part of the state tomorrow, but most of the state will stay dry with a partly to mostly sunny sky along with a high in the 85-90 degree range.

Thursday and Friday will be dry with a mostly sunny sky both days; an easterly flow will bring temperatures down a bit with highs in the low to mid 80s.

THE ALABAMA WEEKEND: Moisture levels will rise slightly, and we will mention some risk of isolated showers Saturday and Sunday, but the chance of any one spot getting wet is only 10-20 percent. With a partly sunny sky afternoon temperatures will rise into the mid to upper 80s both days.

NEXT WEEK: The upper ridge holds, and the week will remain mostly dry with only isolated showers on a couple of days. Highs will be in the 88-92 degree range. No sign of any severe weather threats for Alabama, and I think it is safe to say we are pretty much done with the 2021-22 severe weather season (it runs from November through May). See the Weather Xtreme video for maps, graphics, and more details. 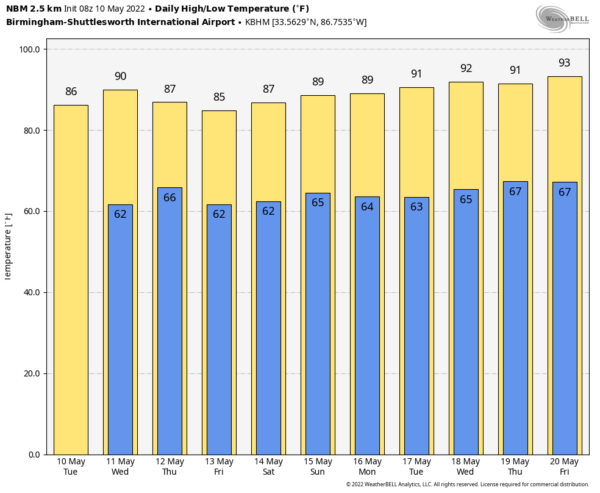 HURRICANE SEASON: With the tornado season winding down, now we look ahead to the 2022 Atlantic hurricane season, which runs through June 1 through November 30. Phil Klotzbach and his team at Colorado State released their outlook for the season, and they expect above average activity with 19 named storms, 9 hurricanes, and 4 major hurricanes. Names this year are Alex, Bonnie, Colin, Danielle, Earl, Fiona, Gaston, Hermine, Ian, Julia, Karl, Lisa, Martin, Nicole, Owen, Paula, Richard, Shary, Tobias, Virginie and Walter.

ON THIS DATE IN 1905: On Wednesday, May 10th, 1905, the Oklahoma Territory was struck by one of the worst natural disasters in early American history. Tornadoes pounded the southwest part of the Territory, one of which flattened the town of Snyder. The “official” death toll is listed today as 97, but the actual number of victims may never be known.

ON THIS DATE IN 2010: On this day, Oklahoma experienced its largest tornado outbreak since May 3, 1999. Fifty-five twisters tore through the state, including two rated EF4. The EF4 storms took three lives and injured 81 people. Ironically, both EF4 tornadoes struck Norman, Oklahoma, home of the Storm Prediction Center and the National Severe Storms Laboratory.