SUMMER-LIKE WEEK: With a partly sunny sky, look for a high in the mid 80s across Alabama this afternoon… the average high for Birmingham on May 2 is 79. A few widely scattered showers and storms will likely form during the afternoon and evening hours; odds of any one spot getting wet today are 20-30 percent. SPC has defined a low end “marginal risk” (level 1/5) for the northwest corner of the state where a few storms could produce hail and gusty winds.

Tomorrow will be warm and mostly dry with only isolated showers as the upper ridge holds; the high will be in the mid 80s. Scattered showers and storms should be a little more numerous over the northern half of the state Wednesday as a weakening cold front approaches. Chance of any one spot getting wet tomorrow is 10-20 percent, and 50-60 percent Wednesday.

THURSDAY/FRIDAY: While most of the day Thursday will be warm and dry, a band of organized showers and storms will likely push into the state late Thursday night into early Friday morning. SPC has defined a severe weather risk for much of West Alabama with this system. 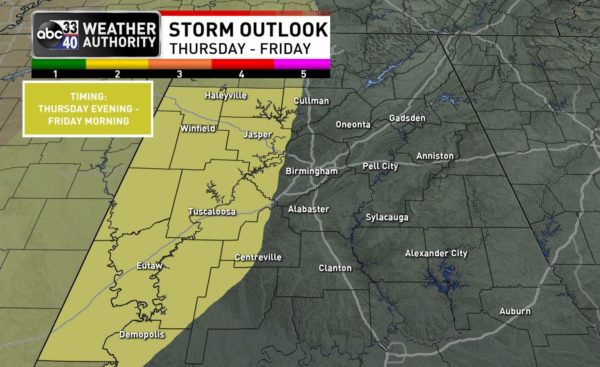 The higher severe weather probabilities are to the west Thursday, across the Mid-South, including places like Memphis. But, storms could produce strong winds and hail as they move through Alabama. Maybe a brief, isolated tornado or two. The core window for strong to severe thunderstorms for Alabama will come from about 12 midnight Thursday night through 12 Noon Friday. We will be much more specific about the threat as the event gets closer.

The sky will clear late Friday afternoon over the northern half of the state as drier air returns; the high will be in the 77-80 degree range.

MOTHERS DAY WEEKEND: For now Saturday looks like a dry, pleasant day with a good supply of sunshine and a high around 80 degrees. Moisture will return Sunday, and a few scattered showers are possible, but it won’t be a “wash-out” or an all day rain. The sun will be out at times, and the high will be in the low 80s.

NEXT WEEK: For now much of the week looks quiet, although a few widely scattered showers could pop up from time to time. Highs will be in the 80s… See the Weather Xtreme video for maps, graphics, and more details. 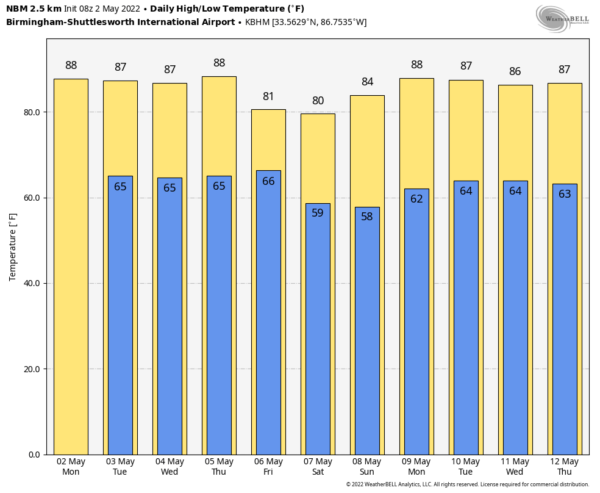 ON THIS DATE IN 1929: Virginia’s worst tornado disaster occurred on this day. Six tornadoes, two of which were west of the Blue Ridge Mountains, killed 22 people. One tornado killed twelve children and a teacher at Rye Cove, in Scott County. The storms destroyed four schools.

ON THIS DATE IN 2010: The Nashville/Middle Tennessee historic flood event continued. Some areas received nearly 20 inches of rain May 1-2, the highest of which was 19.41 inches reported by a CoCoRaHS observer in Camden, TN. Numerous rainfall records were broken at the Nashville International Airport, including the most rain received in a 6 hour period, highest calendar day rainfall, and wettest month, along with several others. Incredibly, the Nashville Airport experienced its wettest and third wettest days in history on back to back days. Many area rivers exceeded their record crest levels, including the Harpeth River near Kingston Springs, which rose to 13.8 feet above the previous record. The Cumberland River at Nashville reached its highest level since flood control was implemented in the late 1960s, flooding parts of downtown Nashville. Waters from the Cumberland reached as far inland as 2nd Avenue, flooding many downtown businesses.