SUNNY NOVEMBER DAY: With a sunny sky temperatures are in the 75-80 degree range across Alabama this afternoon… the average high for Birmingham on November 2 is 70. Tonight will be clear with a low in the 50s.

We don’t expect to break any records, but temperatures will be around 10 degrees above average for early November.

THE ALABAMA WEEKEND: A cold front will likely push rain into the western and northern part of Alabama Saturday morning. Some thunder is possible, but no severe storms are expected with weakening dynamic support and little instability. Showers will fade as they try and push into the eastern half of the state later in the day. This won’t be an “all day” rain… the most widespread rain will come over the northwest 1/2 of Alabama. With a mostly cloudy sky, the high Saturday will be in the mid to upper 70s.

Then, on Sunday, the front will dissipate. The day will be mostly cloudy with a few scattered showers possible, but nothing really widespread. The high Sunday will be in the 74-77 degree range.

NEXT WEEK: For now much of the week looks dry and mild with highs in the 70s; there is evidence in global models of a nice push of colder air dropping into the Deep South toward the end of the week, or the following weekend (November 12-13)… See the daily Weather Briefing video for maps, graphics, and more details.

TROPICS: Hurricane Lisa, with winds of 80 mph, is about to make landfall on the coast of Belize. Although the center is forecast to emerge over the Bay of Campeche in about 48 hours, strong southwesterly shear associated with an upper-level trough near Texas is expect to cause the system to weaken to a remnant low pressure area by the weekend. No threat to the U.S. 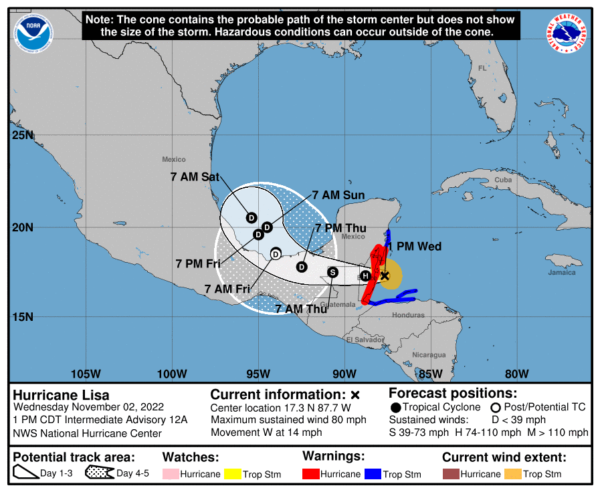 Martin also reached hurricane strength today; winds are 75 mph. It is in the North Atlantic, well northeast of Bermuda. The system become an extratropical, cold core North Atlantic storm later this week, and is no threat to land. 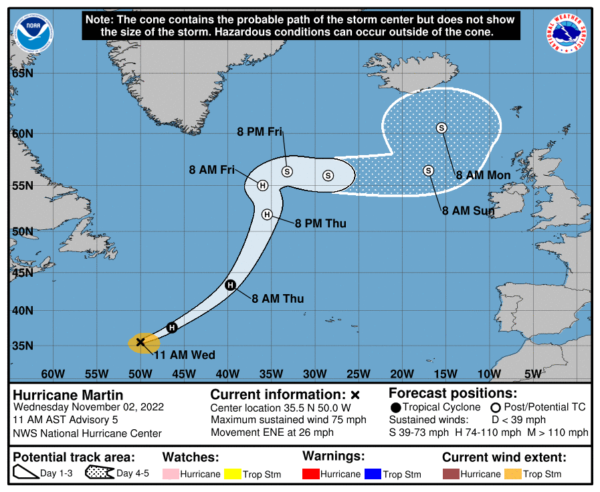 Elsewhere, a complex, non-tropical area of low pressure is expected to develop this weekend over the northeastern Caribbean Sea or the southwestern Atlantic. Some slow subtropical or tropical development of this system is possible afterward while it moves generally northward to northwestward through early next week. NHC gives it a 20 percent chance of development over the next five days.

FOOTBALL WEATHER: The sky will be clear Friday night for the high school playoff games; temperatures will fall from the low 70s at kickoff, into the upper 60s by the final whistle.

UAB will host UTSA Saturday at Protective Stadium in downtown Birmingham (2:30p CT kickoff)… the sky will be cloudy with a chance of showers during the game. Temperatures will be in the low to mid 70s.

Auburn will take on Mississippi State in Starkville Saturday evening (6:30p CT kickoff)… the sky will be cloudy; it now looks like there is a decent chance the rain will end by kickoff… just an outside risk of a shower during the first half. Temperatures will be in the low 70s at kickoff, and in the upper 60s by the final whistle.

And, Alabama will be in Baton Rouge to play LSU in “Death Valley” (6:00p CT kickoff)… the sky will be cloudy with a lingering shower possible during the first quarter, but like the situation in Starkville it now looks like most of the widespread rain will be over by kickoff. Temperatures will be close to 70 degrees during the game.

ON THIS DATE IN 1992: Another infamous November Great Lakes Storm brought windy conditions to Minnesota’s Lake Superior shoreline. 70 mph winds caused waves to crash over 130-foot walls along the shore.