DRY THROUGH MID-WEEK: An upper ridge will keep Alabama rain-free through the daytime hours Thursday. Look for a partly sunny sky today and tomorrow with highs in the 82-85 degree range. The average high for April 27 at Birmingham is 77. Clouds will increase Thursday ahead of a cold front, and we expect occasional showers and thunderstorms late Thursday night into Friday. At the moment it looks like the main window for rain will come from about midnight Thursday night to noon Friday, but some rain could linger into Friday afternoon, especially over the southern half of the state.

Rain amounts from 1/2 to 1 inch are expected, and for now severe thunderstorms are not expected with very limited instability and weak dynamic forcing. Friday will be cooler with a high in the 68-74 degree range, and the sky will clear Friday night as dry air returns.

THE ALABAMA WEEKEND: Dry air means a beautiful weekend for the state. Lots of sunshine both days… the high Saturday will be in the mid 70s, followed by low 80s Sunday.

NEXT WEEK: Dry, warm weather is forecast for the first half of the week with highs in the low to mid 80s Monday through Wednesday. Showers and storms return by Thursday… See the Weather Xtreme video for maps, graphics, and more details. 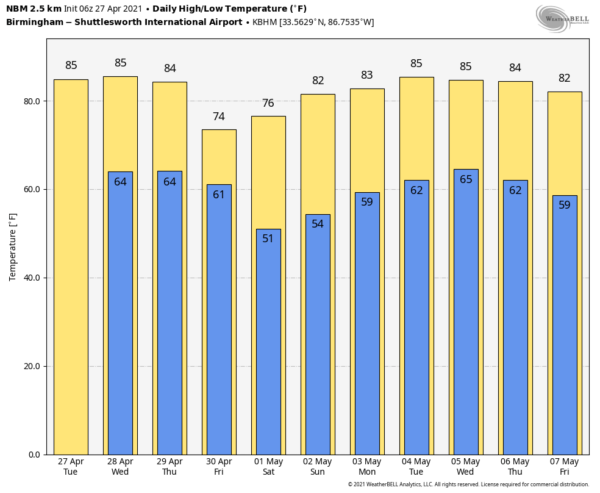 ON THIS DATE TEN YEARS AGO: A generational event brought 62 tornadoes to Alabama, killing 252 people and injuring many more. Three of the tornadoes were rated EF-5; one of those moved through the communities of Hackleburg and Phil Campbell in Northwest Alabama. This tornado killed 72 people, making it the deadliest single tornado ever to strike the state of Alabama as well as (at the time) the deadliest in the United States since the 1955 Udall, Kansas, tornado that killed 80 people. In addition to being the deadliest, this tornado also had the longest track of any tornado in the outbreak, with its path extending 132 miles across Northern Alabama and into Tennessee

There were eight EF-4 tornadoes, including the one that moved through Tuscaloosa and the western part of the Birmingham metro.

There were two rounds of thunderstorms that horrible day. The morning event brought widespread wind damage, and three tornadoes rated EF-3, and five rated EF-2. Five were killed, and over a quarter of a million people lost power. Then, during the afternoon and evening hours, violent supercells brought long track tornadoes, like bullets from hell.