DRY WEATHER CONTINUES: Most of Alabama will stay dry through the weekend with sunny warm days and clear pleasant nights. A few isolated showers could show up near the Gulf Coast over the weekend, but the rest of the state will be rain-free. Highs will remain in the 86-89 degree range.

NEXT WEEK: Heat levels rise as an upper ridge continue to build; highs will be in the 90-94 degree range sunny days and fair nights. Still no sign of any high impact or big rain event for Alabama for the next 7-10 days… See the daily Weather Briefing video for maps, graphics, and more details. 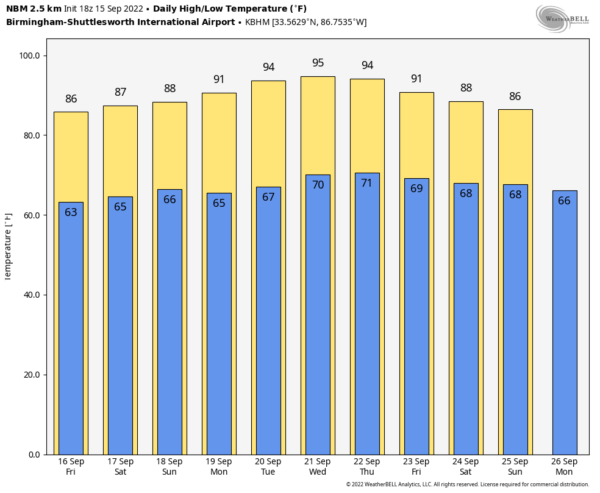 FOOTBALL WEATHER: Clear weather is the story for the high school football games across Alabama tomorrow night with temperatures falling into the 70s during the games.

TROPICS: Tropical Storm Fiona is a highly sheared system in the Atlantic about 450 miles east of the Leeward Islands with winds of 50 mph. Moderate shear, generally out of the west, is expected to continue for much of the forecast period, and NHC is forecasting Fiona to stay below hurricane strength for the next five days. It will turn north by early next week near Puerto Rico or Hispaniola, and most likely will remain well east of the contiguous U.S. The system is no threat to the Gulf of Mexico. 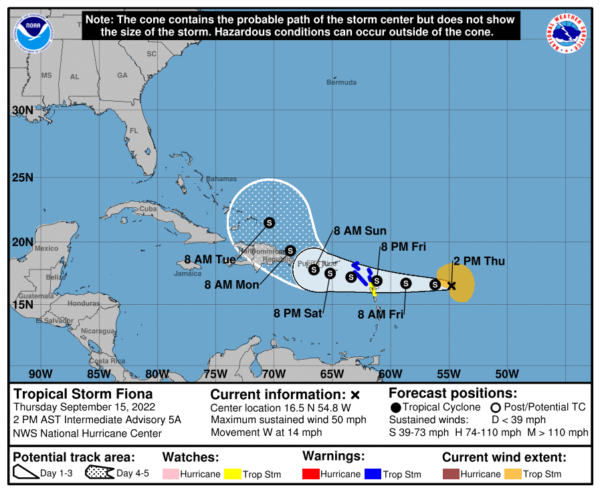 ON THIS DATE IN 1945: A hurricane entered the South Florida coast at Homestead, curving northward right up through the center of Florida, remaining over land, and exited near Jacksonville Beach with winds gusting to 170 mph. The following is from the Homestead Air Reserve Base. “On Sept. 15, 1945, three years to the day after the founding of the Homestead Army Air Field, a massive hurricane roared ashore, sending winds of up to 145 miles per hour tearing through the Air Field’s buildings.”

ON THIS DATE IN 2020: Hurricane Sally was nearing the Alabama Gulf Coast. It would make made landfall in Gulf Shores at 5a CT the next day, on Wednesday, September 16 as a strong Category 2 hurricane with maximum sustained winds of 105 mph. Sally produced widespread wind, storm surge, and freshwater flooding across coastal AL and the western Florida Panhandle. Flood and wind damage also extended well inland into inland southwest Alabama and south central Alabama. Sally was an extremely slow moving hurricane, which prolonged and exacerbated the local impacts. The storm was moving at less than 5 mph at the time of landfall, resulting in a long duration of tropical storm and hurricane force winds, storm surge, and torrential rainfall.