Doesn’t tell the whole story tho.

Note that the 2 yellow Xs do not tell the whole story. They look like Goal Posts and I want to say “kick it between the uprights!!” Seriously though there is a huge area of leftover convection from the previous wave that didn’t develop, but maintains convection. Whether it has a chance of development or not, it definitely will keep the Atlantic West of our highlighted wave so it has less SAL to deal with as it moves West. Either way the wave off of Africa is a nice size healthy with a 20% chance in the 5 day. Further West is the smaller system entering the Caribbean that came from dubious backgrounds but is still a player.  Systems that form off of South America is not that rare, though this set up was more rare but either way it’s very rare as in undercooked, not done yet!

The GFS 18Z Wild Ride Model Run showed this system developing way down the line in the Caribbean as it did several wild dance steps, leaps and arabesques before developing into a dangerous hurricane moving into the Gulf of Mexico. Today the same model, but a different run, has is way toned down as if someone wrote it a Rx for Oxycodone and yet it’s still trying to swirl around the SW Carib, flirt with a high jump over towards the Pacific and then settling back down for staying in the Atlantic Basin.  Bizarre.

Sometimes the GFS puts out absurd, otherworldly scenarios that look as if it’s on Crack and people want to smack it or send it back to the shop for a reboot. Easy to make fun of the GFS but what it’s job is … is to sniff out development far outside the normal range of models. For instance it can show an unbelievable forecast where some weak wave turns into a violent hurricane close to land delivering 50 feet of rain, everyone makes fun of it and then after it happens everyone is sudennly quiet. And, while it doesn’t pan out exactly as the original “crazy model run” sometimes part of that model run does verify down the road.  Did I mention it’s Harvey Anniverary today on this run of Prime Time in the Tropics … Hurricanes that developed and made landfall. And, if you want to say “good” because we don’t need THAT much weather, be aware the South has been struggling with intense flooding and nonstop rain without a named storm. 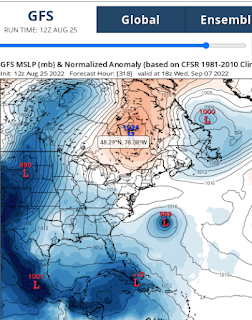 When I look at the GFS shown above.

My take away is this.

WOW a lot of MOISTURE in the CARIB/GOM

I don’t look at it like a HURRICANE could form.

I see it as LOW PRESSURE. Nothing more. 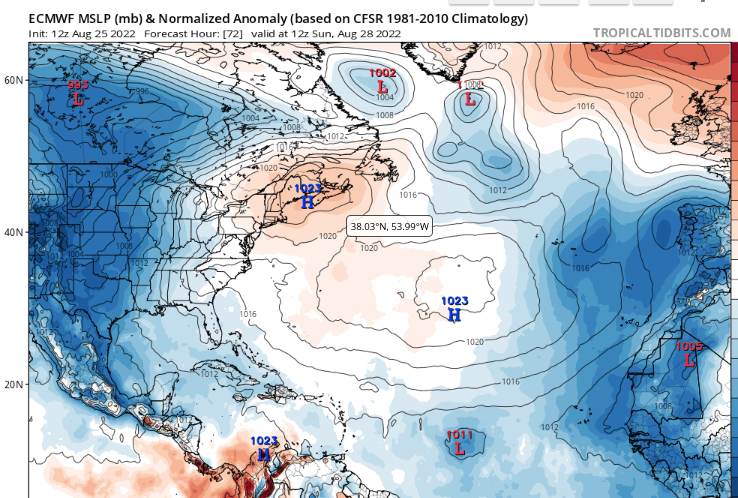 The Euro seen as the more reliable sibling shows nothing of substance forming in the Atlantic for a while. True, it doesn’t go out as far as the GFS, that makes it usually more reliable. 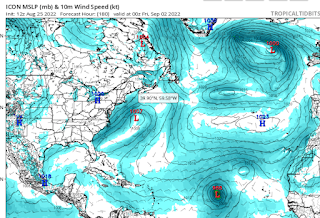 No acrobatic tropical storms in the GOM.

What do I see? 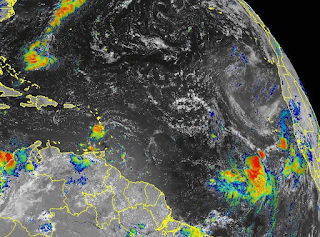 I see that the ULL area filled with convection near the Bahamas is becoming one with the FRONT. I see the lead wave that has 20% passing through the Islands, maintaining convection and on the loops it has a bit of a twist, no fancy dance steps but it’s a beginning or rather it has a chance. The wide, large, huge area of convection brigtly colored doing a Can Can dance not getting any love from the NHC out ahead of the new wave off of Africa with 20% chances in the 5 day.

Basically nothing new. The NHC has not even designated it yet as an Invest as of 3 PM on Wendesday, neither of them as Invests. The NHC seems to be playing hardball this season and hard to get and that’s not a bad thing.  Either they will develop or they won’t and if they don’t “why not” and why are we so slow with an MJO in a forecast busy season with recod low ACE? 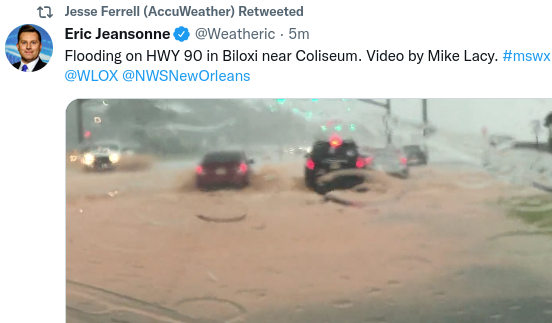 Yet we have all the weather, flooding without a hurricane. 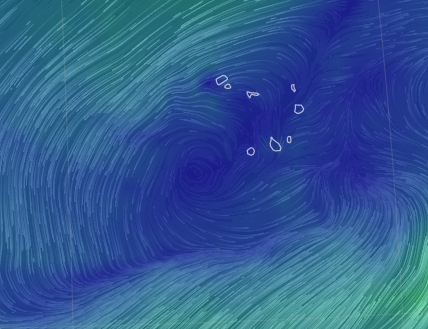 You want to bet on the new wave off of Africa. 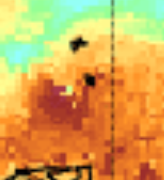 Again the most interesting area….

… doesn’t have it’s yellow wings back.

I’m on vacation in the Miami area and seeing various familiy memories and driving past old haunts that look better today than they looked years back. Kind of like this area in the Atlantic that’s catching everyone’s attention yet is being ignored.

It’s been a strange year. Either the tropics ignite this week while the MJO is in town or something was seriously wrong with the models predicting 2022 to be a very busy year.