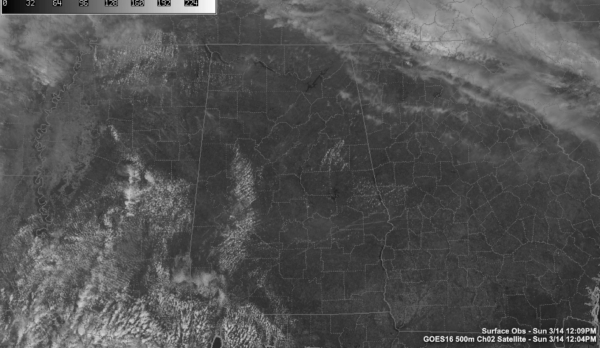 A gorgeous day is in progress across North and Central Alabama. Skies are mostly sunny with just a few cumulus clouds popping up. Low clouds and fog that were over Southwest Alabama dissipated by mid-morning.

Temperatures are near 70F over the Tennessee Valley, with lower 70s in the I-20 Corridor and middle 70s over South Central Alabama. Highs will be very near record territory this afternoon. The record high at Montgomery is 85F, set just last year, as well as in 1989 and 1967. The record at Birmingham is 84F, set in 1967. It was 86F in Tuscaloosa ono this date in 1967, their record for the date. Anniston’s record is 83F set in 1967.

The rest of the day will be dry and mostly sunny until clouds start using into West Alabama around 4-5 p.m. Clouds will gradually increase across the area during the evening.

A few showers will move across Central Alabama after midnight. It looks like showers and storms will reach Northwest Alabama around 8-9 a.m. Those storms will flare up just a bit through noon over northwestern counties as severe weather ingredients overlap with the storms. There could be a couple of damaging wind gusts and a brief isolated tornado during the late morning and early afternoon hours before the storms start running into drier air and weakening. The potential for any severe weather will be limited to parts of Lamar, Fayette, Walker, Marion, Winston, Colbert, Franklin, Lauderdale, Lawrence, and Limestone counties.

This is certainly not the main threat this week, but as we say in Alabama when it comes to storms, expect the unexpected.

The cold front that will trigger tomorrow’s storms will stall over North and Central Alabama. Look for another round of showers and storms to affect South Central Alabama late Monday night. They’re not expected to be severe, but they could make a lot of noise.

With the front hanging around on Tuesday, we could see additional showers and storms.

The front will start to come back northward on Wednesday, accompanied by showers and storms. We will have to watch these storms for some severe potential. But the main event will come Wednesday afternoon and evening as a cold front starts to encroach on the area. A line of strong to severe storms will fire over Mississippi and push towards Alabama. By the time the storms fire up, conditions will be very favorable for severe weather, with moderate instability, strong bulk shear, and increasing low-level helicity which presents the threat for tornadoes. In addition, lapse rates are expected to be very strong, allowing for powerful updrafts and the potential for large hail. With a strong low-level jet, damaging winds will be a significant threat also.

There is a decent amount of confidence that this will be a significant severe weather situation for Alabama. The complicating factors include how far north the warm front can make it. The GFS this morning predicts that it will make it to near the Tennessee border which would put all of Alabama in the rich warm sector. Morning convection can sometimes contaminate that warm sector and work the atmosphere over, taking away potential from the main storms. We will have to watch for late morning storms to become severe and do just that.

So, recapping for WEdnesday. Here is the SPC Day Four Outlook: 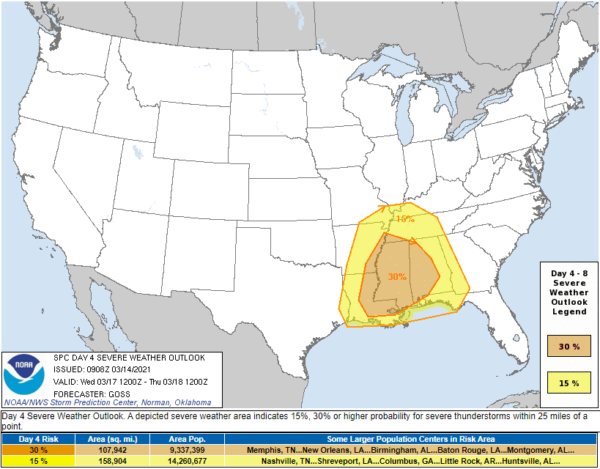 The 30% risk area roughly correlates to a Moderate Risk, with the 15% area correlating to a Slight Risk by the time we get to Wednesday.

TIMING
…Wednesday morning for storms along the warm front, and through the afternoon and into the overnight for storms ahead of the cold front