Very cold air will be coming to the western lowlands, probably the coldest air we have experienced in years.   The cold is pretty much guaranteed.

But snow is something else and the major models are not all on the same page, ranging from a dusting to a major snow event.

Let me give you the latest information.

As predicted, last night brought light snow above roughly 500 ft during a Puget Sound convergence zone event.   Up in the hills of Bellevue, the scene was quite snowy this morning (see below) and some snow got mixed in even near sea level (but no accumulations there). 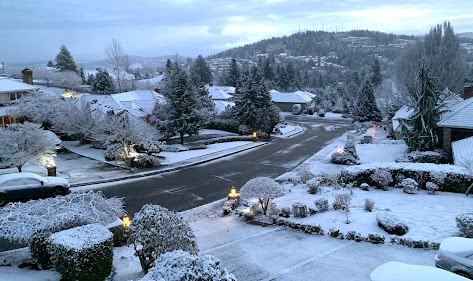 So what is going to happen now?    The air above us right now is relatively cold (allowing snow even at sea level if there was moisture), but the air will get much colder over the next few days.

The lates NOAA/NWS ensemble forecast for temperature at Seattle based on running the GFS model  many times shows temperatures not getting beyond the low thirties on Thursday and Friday,  with the minima dropping into the lower 20s. 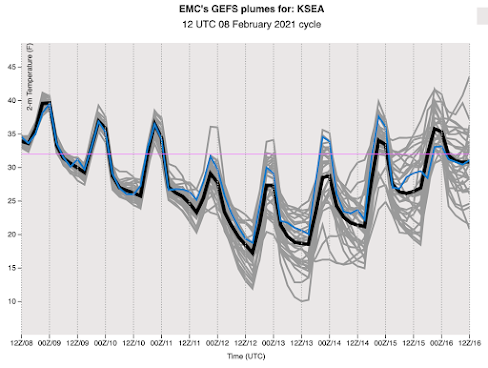 The surface air temperature forecast for 1 PM Thursday shows sub-zero temperatures in the mountains and teens/single digits in eastern WA.  And a plume of cold air will be jetting out from the Fraser river valley and heading to those poor folks on the San Juan islands.

Bottom line:  you can bank on the cold, so protect your plants, remove hoses outside of homes/apartments, make sure your plants are in, among other tasks.

And the large homeless population of our region needs to be moved indoors.  Past events like this have resulted in deaths from exposure.

But what about snow?

Major models have differing solutions, and the ensembles of some of the modelings systems are all over the place.  The issue is not temperature..we will be cold enough… the question is moisture.

Start with European Center, which is generally the best…but not always.

Looking at the EC high-resolution run for total snowfall through Thursday at 4 AM, the lowlands are yet to get hit, except for light snow over NW Washington, and heavy snow over the North Cascades. 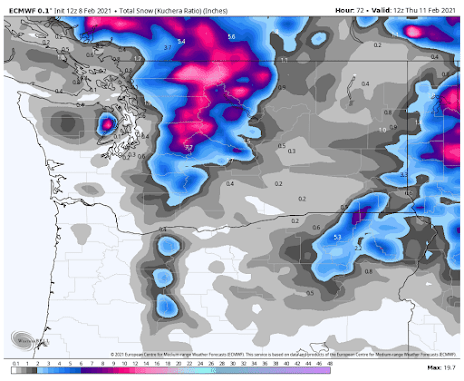 But by 1 PM Friday, the situation is VERY different as a Pacific system approaches the Oregon coast.  North Seattle gets light snow, but much heavier amounts are predicted south of Tacoma.  Olympia gets hammered with 7-8 inches and Portland gets several inches. 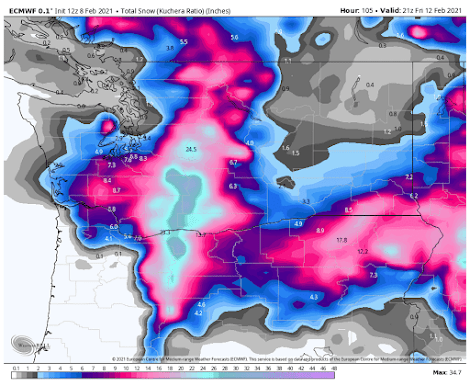 But the event is not over: total snowfall through 4 PM Sunday really buries SW Washington and Portland get hit hard as well, with roughly a foot.   Seattle gets a few more inches with a huge difference between north and south Seattle. The southern WA and norther Oregon Cascades are just buried. 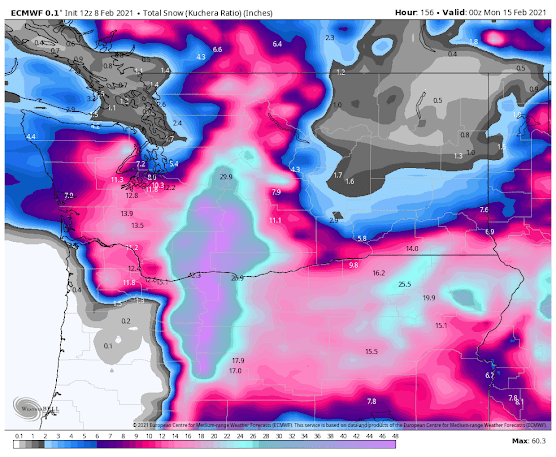 Keep in mind:  a small northward shift of the precipitation could bury Seattle.

Well, the above it one solution.  What does the European Center ensemble of many forecasts show? (see below).  Looking at many forecasts helps quantify uncertainty.  Each line in the top panel below is a different forecast (there are 51 of them).  The snow totals are color coded.   Time increases from left to right.  The blue line on the bottom panel indicates the high-resolution run and the green bars are the average of all the forecasts (which is normally the best thing to go for).

Bottom line:  the event starts light but most of the runs have significant snow at Sea Tac. 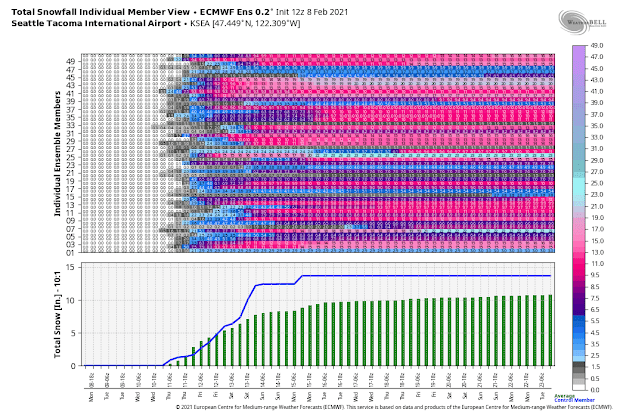 The U.S modeling system…the GFS… is taking the system further south, with far less snow in Seattle.  Check out the smaller 21-member U.S ensemble plot.  MUCH less snow.  A lot of the gray colors (which is an inch or less). 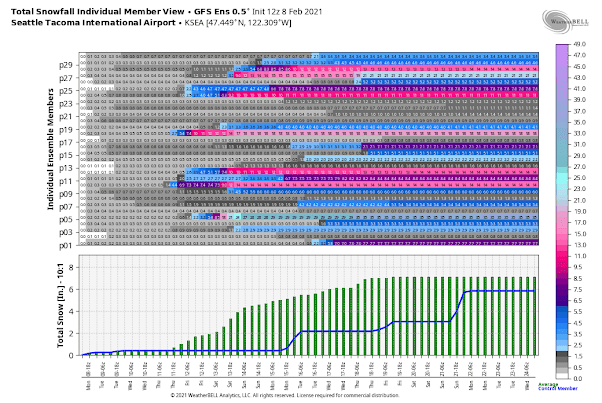 During the next day the differences between these two systems should decrease…and keep in mind that the European Center is usually more skillful–but not always.

Uncertainty is a fact of life with weather prediction, particularly for lowland snow forecasts that require everything to line up right to get a big snow even.

And one more thing to ponder…even if there is a lot of snow, there won’t be a need for a school snow day–one of the most glorious events in the lives of most kids.