THIS AFTERNOON: The sky has become partly to mostly sunny across Alabama this afternoon… the exception is the northwest part of the state where clouds and a few snow flurries linger. Temperatures are only in the 20s over most of North/Central Alabama… the average high for February 16 at Birmingham is 59. Tonight will be fair and cold with a low between 15 and 25 degrees.

ANOTHER SYSTEM ON THE WAY: Clouds will increase tomorrow, and temperatures rise into the 35-45 degree range for most areas by mid afternoon. A large mass of rain will move into the state tomorrow evening, and unfortunately it looks like the precipitation will begin as sleet and freezing rain over Northwest Alabama, where temperatures will likely remain below freezing. This could add to the ice accumulation already in place across Lauderdale, Colbert, Lawrence, Marion, Winston, and northern Lamar counties. A winter storm watch is in effect for North Mississippi, and a watch or advisory could be required for Northwest Alabama tonight for this potential.

On the positive side, warm air advection will likely change the sleet and freezing rain over to rain late tomorrow night across Northwest Alabama. For most of the state, the system will bring a soaking rain tomorrow night into early Thursday morning. Rain amounts of around one inch are likely. And, to the south, strong to severe thunderstorms are possible over the southern quarter of Alabama, where unstable air will work into the area from the Gulf of Mexico. 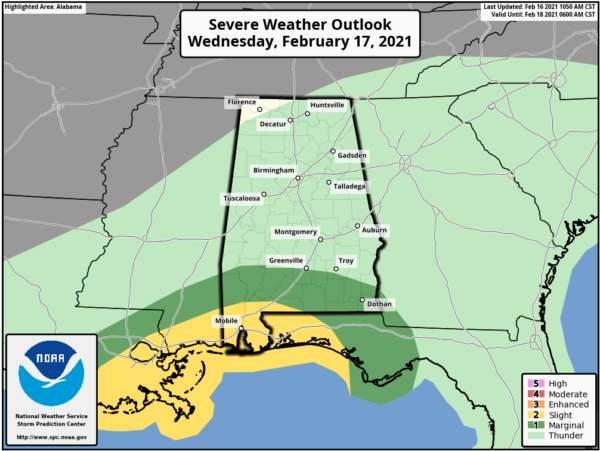 The day Thursday will be cloudy and cold with some lingering light rain… there could even be a few snow flurries over North Alabama late Thursday and Thursday night. Temperatures will likely hold in the 30s over North Alabama, with 40s and 50s to the south. Then, on Friday, the day will be partly sunny with a high between 38 and 45 degrees for North/Central Alabama.

THE ALABAMA WEEKEND: Saturday morning will be cold with a low between 18 and 25, but a warming trend begins Saturday afternoon with a high in the mid 50s along with a good supply of sunshine. Sunday will be a mostly sunny day with a high in the low 60s.

NEXT WEEK: A cold front brings chance of showers Monday, especially during the morning hours. More showers are possible later in the week, but on the positive side temperatures will likely be in the 60s through the week as the flow of cold, Arctic air is shut down into our region. See the Weather Xtreme video for maps, graphics, and more details.

ON THIS DATE IN 1995: A pre-dawn F3 tornado tore through parts of Cullman and Marshall counties in North Alabama, killing five people in the communities of Joppa and Arab.