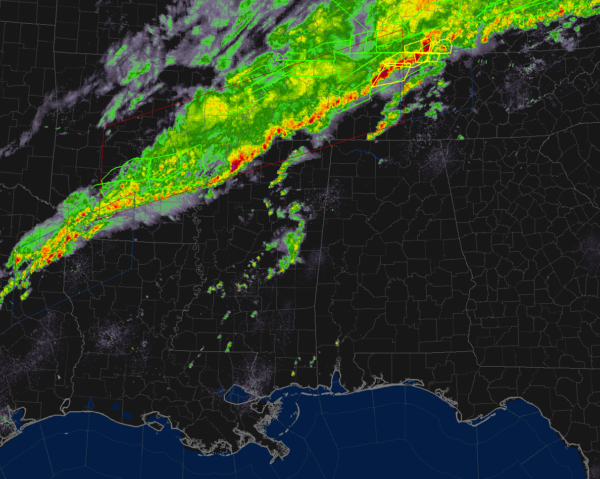 As of 7:40 pm, there is not much happening in North/Central Alabama at the moment, but the activity stretching from eastern parts of Texas through the western and middle parts of Tennessee is heading in our direction. While the main motion of the line of storms is pushing eastward, the heavier cells are moving just a tick south of eastward.

Severe Thunderstorm Warnings are in effect for the northern portions of Middle Tennessee and up into Southern Kentucky. The good news is that there are no active Severe Thunderstorm or Tornado warnings in effect off to our west and northwest where we would expect our storms to come from.

Latest thoughts from NWS Huntsville for the North Alabama threat as of 6:43 pm:

With the setting sun, we are seeing our severe threat rapidly diminish as we head into the evening hours, but not completely extinguish. We have enough favorable shear and helicity in place to create some rotation, and broad rotation aloft has been observed in the line of storms to our west. However, there have been very few concerning signatures that indicate a tornadic potential with these storms. Coupled with the increasingly unfavorable environment, we expect our severe threat to rapidly drop after the next 2-3 hours.

That said, this is a training line of storms with radar estimated rain rates up to 2 inches per hour. Although the severe threat may diminish, there is still a heavy rainfall potential and up to 2″ of rain will fall over the TN Valley, with the highest totals over northwest Alabama. If there are any embedded thunderstorms, these will locally enhance rain rates and may result in localized flash flooding, on top of any additional rises on area rivers, creeks, and streams. 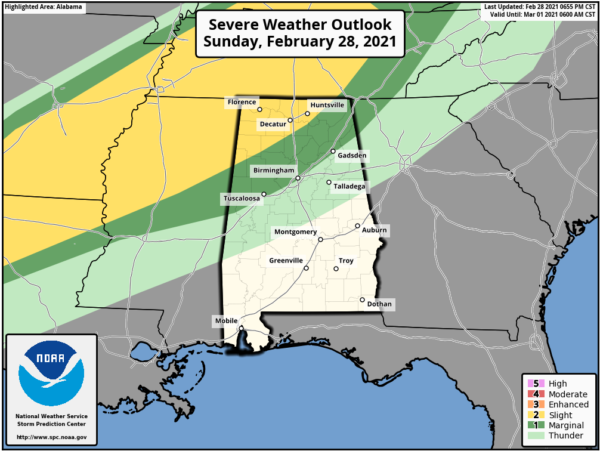 The SPC continues a level 2 Slight Risk (yellow) for locations along and north of a line from Winfield to West Point to Hytop. A level 1 marginal risk (dark green) continues south of that to a line from roughly Tuscaloosa to Birmingham to Gadsden.

The main window for stronger to severe storms continues from now until 2:00 am for the North Alabama counties, and now until 6:00 am for the Central Alabama locations in the risk areas. The main risk will be from damaging straight-line thunderstorm wind gusts up to 60 MPH, but a tornado or two can’t be ruled out.

At this point, there is not enough instability out there to be supportive of stronger to severe storm development, and that is the most reason why radar is relatively quiet over North/Central Alabama. Instability will move in and mix with decent helicity and bulk shear within the next hour or two and we may see storms forming out ahead of the main line. We’ll need to watch especially from 9:00 pm through 2:00 am for the greater risk of severe storms, before the threat eventually peters out.

The Severe Thunderstorm Watch Has Been Allowed to Expire : The Alabama Weather Blog