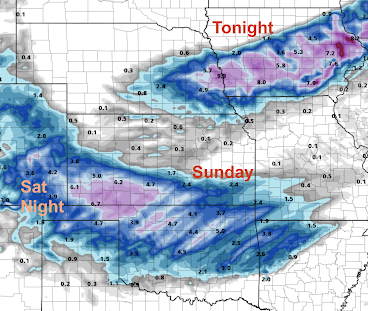 This translates into more snow near and east of Interstate 35 between Wichita and Perry (OK) than I first thought. This seems like a reasonable initial estimate given these new conditions.

Bottom line: In Kansas south of U.S. 400 and in Oklahoma north of I-35, three inches or more of snow seem quite possible. Some spots, especially between about Woodward and Garden City, could see as much as 8 inches. No strong winds are forecast.

Also, note there could be spots of heavy snow (≥ 3″) in parts of the Ozarks region.